This is mark Joseph “young” blog entry #342, on the subject of Fireworks Times Five.

When I first heard Fireworks first album, I was very disappointed.

That, though, was very unfair.  I had already heard their second and third albums, two of the best Christian rock albums of the era, and that the lighter more pop sound of their earlier work was a disappointment is hardly a criticism of it.  It really was a good album. 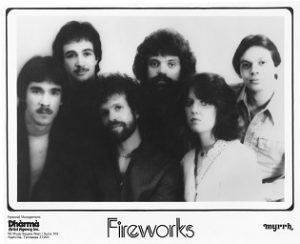 The only name I ever knew was Marty McCall, who was lead vocalist and keys through most of the band’s career as many others changed around him (although he once mentioned someone named, I think, “Gwen”, as having sung on the live album).  He also released a solo album in the middle of the run of Fireworks albums, which tended to confuse people because the band was so much him but the solo album was a much lighter sound.  I spoke with Marty more than once, so I have a number of anecdotes; I also have a huge number of favorite songs.  Marty had a powerful Irish tenor voice that dominated the music and made the rock sound work.  He told me that before they were a band they were studio musicians providing support for other artists, and then they realized they could do this themselves, wrote some songs, and went forward.

The back cover of that first self-titled album explained that the name Fireworks was talking about the works that pass through the fire.  I don’t remember any titles, but it opens with upbeat New Day, followed the memorable slower Don’t Look Back (this video has a full minute of dead air at the end), the funkier Carrying On (also with dead air at the end), the upbeat rockier Presence of the Lord (and again), the gentler rock ballad Forever With You (seems to be a thing), the bouncy Maybe It’s Love and offbeat Family, the racing Open Your Eyes, the calmer Talks With My Father, another bouncy Takin’ A Rest, and finally New Man (another long space at the end).  Overall it was very good stuff for 1977, and very promising.

Yet I don’t think it prefigured the next release, listed by Christian Contemporary Music Magazine as one of the best of 1979, Shatter the Darkness.  From the powerful opening chords of Change My Heart it was evident that this was now a rock band.  The gentle opening of Beautiful Woman still moved into a rock sound.  After the Rain had the familiar bouncy racing sound of some of the first album’s songs, followed by the quieter rock ballad Calling My Name.  The A side ended with the rocking Rock Band, a musical defense of Christian rock music.

Flipping the album over (yeah, we did that with vinyl), it opened with the quietly pleading Like Children, followed by I Know Power, an upbeat friendly piece.  The dramatic Love You Tonight leads into the rocking title song Shatter the Darkness, and then the album closes with the eerie The World.

It was an incredibly good album that still stands up today; yet the band then topped it the next year with Live Fireworks.  Opening with the driving fast-paced Rescued (“You might as well have been pushed off Niagra Falls in a paper sack”), it kept the tempo as it ran right into Listen and then the playful Target Practice (“taking up the bow and arrow, aiming for the straight and narrow”) before slowing a bit for Someone’s Got a Hold on Me.

The B side opens with another playful one, humorous lyrics that make a point in Toll Free (“He won’t forget your number, and He’s there all the time, You can go to the Lord when you ain’t got a dime.”), followed by the slower but powerful Good Thing, and the moderate and again playful Rusty Burdens.  It slows down again to a gentle call in It All Comes Down to You, and then goes out strong with Ready for the Rest of You.

As good as that live album is, Marty says it embarrasses him.  He couldn’t hear himself in the monitor, and instead of making a fuss to get someone to turn up the monitor he forced his voice, and when he listens he hears the forced sound.  I don’t; I think he’s in great voice on the record.  But I understand how he feels–there are a lot of recordings I’ve made over the decades that embarrass me for reasons that listeners who aren’t me can’t hear.

The following year Marty released a solo album entitled Up, but MCA/Songbird marketed it as by Marty McCall & Fireworks, presumably because members of the band were his studio musicians for it.  One song on it got heavily requested, entitled Adam, so when I had the chance to interview him I asked about it, and he said he did not like the song, but for reasons that really had nothing to do with the song.  He had set aside a week and rented a space for the specific purpose of writing songs, and in the week this was the only song he wrote.  So as good as the song is, it always reminds him of that failed week.

There was one more album from the band, Sightseeing At Night, pushing the envelope a bit further.  I am less familiar with that one, but I remember No Strings and Incognito.

It was a couple years later that I heard the band had dissolved, but I caught up with Marty at a solo concert in our area and chatted with him informally.  He said that he planned to stay home and write music for other people to sing.  Thus I was surprised a decade later to see his face on the album cover of Undivided by First Call.  It was good work, but heavily jazz influenced with an Andrews-Sisters vocal style.  Then another decade passed and he put his degree in medieval and renaissance music to good use by creating the album Images of Faith, using period instruments to create songs with an ancient flavor with modern and contemporary touches–we have gone through several copies of it by now.  But that’s long after the early days, and we could argue about whether it’s actually contemporary.