This is mark Joseph “young” blog entry #252, on the subject of Petra Means Rock.

There will be quite a few links in this article, because despite the fact that my view of this band was limited to a very small fraction of the time they were playing, I heard a great many excellent songs from them.  They were not the rockiest band out there, but they were among the best. 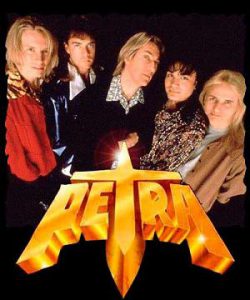 I know I saw their first reported self-titled album, probably the year it was released or the year after while I was in college.  I’m not sure whether I ever heard it, but I knew they were about as cutting edge a rock band as was found in Christian music in the early 1970s.  It was in a sense their Washes Whiter Than album which reached us at the radio station not long after my arrival which introduced me to the band, and taught me something about radio airplay and the music industry.

When I was in high school, maybe even before that, people would say to me about The Doors that if the only songs of theirs I’d ever heard were their radio hits, I didn’t know what they sounded like.  At the time I thought this stupid.  After all, wouldn’t a band’s best songs be their hits, and wouldn’t those best songs be the best examples of their sound?  However, although the album was a collection of guitar, keyboard, and vocal-driven rock songs, the cut that got the airplay was Why Should the Father Bother?, a wonderful song built on three voices, three acoustic guitars, a string section, and subdued instruments–something that could be played by any Christian radio station in the country that could play The Gaithers.

I didn’t get it then, but they repeated the trick with their next album, Never Say Die, whose title song was a pop-rock piece, and which featured such rock songs as Chameleon, Angel of Light, Killing My Old Man, Without Him We Can Do Nothing–all mellower in the studio than they are in live videos–but the song that got the airplay was again a quiet piece, the opener of the album, almost a children’s song in its sound and structure, Coloring Song.

That’s when I got it.  Most of the songs Petra played would never have gotten airplay on most of the Christian radio stations at the time.  Yet each album had one song heavily promoted by the record companies for airplay on all those stations, and that way Petra fans who listened to these mellow stations as the default option for Christian music would learn that there was a new Petra album and would go find it.  They refined the trick with the next album, in which the title song itself, More Power To Ya, was the gentle guitar vocal and keyboards piece that got the broad airplay, and the album itself continued to push the envelope with songs like Stand Up, Second Wind, Rose Colored Stained Glass Windows, Run for the Prize, and Judas Kiss.

In the opening seconds of Judas Kiss the band included a bit of a joke.  At the time, a lot of Christians had found a new way to attack rock music, claiming that if you played the records backwards you could hear satanic messages in the vocals.  The idea was so ridiculous that everyone was joking about it.  One comedian claimed that he played a Black Sabbath album backwards and it said “Praise Jesus” and “Glory to God”.  Petra contributed to this by recording and reversing the words, “What are you lookin’ for the devil for when you oughta be lookin’ for the Lord?” in the first seconds of that track.

I’m afraid that by the time their next album, Not of This World, reached the radio station I was already handing the reins to my replacement, and I never heard the disk.  However, Petra has produced twenty albums, two of them in Spanish, and although they officially disbanded in 2006 they kept reuniting to produce a bit more and play another concert.

They were one of the greats, and I still listen to them today; but they weren’t my favorite, I think.