This is mark Joseph “young” blog entry #296, on the subject of Found Free Lost.

I first encountered Found Free when they played at Gordon College, probably in 1975 or ‘6.  I was in the cafeteria (I have previously mentioned that Gordon did not have an auditorium, and the chapel was not large enough to hold the entire student body, so large gatherings were always in the cafeteria or the gym) in advance of the show, while they were setting up, and I approached their guitarist, Wayne Farley.  I approached him because he was playing what I still on some level consider the “Holy Grail” of instruments, an electric guitar that sounds like an acoustic when amplified.  I asked him what it was, and he gave me an unfamiliar brand name; I believe he said it was from Australia.  I failed to remember that information, partly because on my paltry budget everything was too expensive to consider. 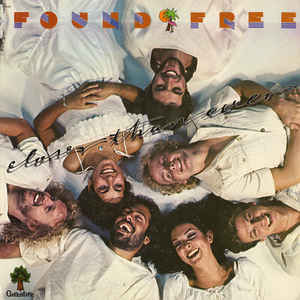 My good friend Jeff Zurheide walked out of that concert, and I understand why, although it might be said that he lacked patience.  The band had a well-organized and well-performed show designed for college campuses generally which began with covers of secular oldies coupled with nostalgic reminiscences to draw in the audience, and then eventually shifted to delivering the gospel message with a few Christian covers and originals.  Jeff was not interested in hearing a secular music concert, and did not anticipate the shift; I stayed to see what they were going to do, although I don’t know why I expected something different.  They were talented.

A couple years later I was out of school and out of work, and I heard they were auditioning for a guitarist.  I arranged an audition.  I had lunch with David Michael Ed, keyboard player and vocalist, and then played for him and vocalist Keith Lancaster, but my fate was sealed at lunch when they learned that I was married–it had been their plan to find someone who could share an apartment in the city with Keith, and so keep expenses down.  They said that my playing and singing were certainly good enough (although I am not at all satisfied myself that I could have replaced Wayne Farley, whose departure from the band had occasioned this opening), but they couldn’t afford my wife.

I often wonder what might have been, but I doubt I could have saved them, as sad as that is.

They did give me a copy of their recently released Greentree Records album Closer Than Ever, saying that I apparently did not know what they sounded like at that point (which was correct, as they had changed significantly in the couple years since I’d heard them).  It was a well produced album with good but not great songs, and the vocal work was very impressive.  I remember many cuts from that disc, but not many of them have been preserved on the web.  Ed’s song I Won’t Turn Back was a gentle opener, but Stone Heart exemplifies the processed sound typical of the LP.  Lancaster’s Do You Want Him? is a gentle call, and Starlight Praise has been described by someone as “brassy gospel swing”.  Touched by Love closes the first side with a bouncy touch, and the B side opens with the title track, smooth and a bit schmaltzy.  Farley contributed the track Still Up Walkin’, a song that prefigures his complicated compositions which appear later elsewhere.  I always liked Lancaster’s Stained Glass Window, but I don’t remember the closing song If You Know by Ed.

I know a few facts that come next, but not the sequence in which they came.  David Ed and his wife Joy separated, and both left the band.  They never actually found a guitarist to replace Farley, but instead found a new bass guitarist and shifted their former bass guitarist to guitar.  I think Lancaster took over on keyboards, and they put together an impressive array of musicians that filled the stage.  I managed once again to catch them in concert, as they released another album–sort of.  They had apparently lost their contract with Greentree, and it was pretty obvious that Sparkal Records was a vanity label, that is, they had produced their own album and paid to have it pressed.  We had a copy at the radio station, and I had my own copy, and it was a superb album throughout, under the title Specially Purchased, Individually Wrapped.  However, it failed to find national marketing, and was the last gasp for the band.

Still, I remember some great songs from it, including Front Lines, I Need You Lord, Just Like a Child, Don’t We Need to Know, and of course the title song, Individually Wrapped, about being who God made each of us to be, instead of trying to copy what someone else is doing (in which they humorously copy several other artist styles in the midst of a group rap).  Not a one of those was found in online video, which is sad because I think it some of their best work. 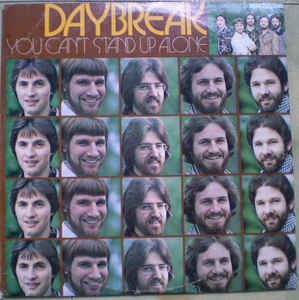 On an only loosely related subject, I would later try out for a guitar and vocals spot in a band called Daybreak.  They lived together and worked out of a farmhouse somewhere in Pennsylvania, and became the go-to people for festival sound systems, but they never told me why they didn’t take me.  They were so insignificant that their discography isn’t published online that I could find (there’s another band of the same name around the same time), but the song I most liked from them was the a capella novelty title track from the one album I ever saw, You Can’t Stand Up Alone, and it appears that there must have been an earlier LP, from which the title track After the Rain is online.  I don’t know–I think I could have helped them, but I am impressed with their vocal work on other videos.  Probably I’ll never know what they didn’t like about me.