This is mark Joseph “young” blog entry #242, on the subject of Disciple Andraé Crouch.

In 1973 Andraé (often spelled André) Crouch released an album recorded live in Carnegie Hall the previous autumn.  I was in that audience for that performance, and remember the excitement of the performance that had a mostly young white audience on its feet.

Prior to that I had never heard of him; I wasn’t at Carnegie Hall to hear him.  He was one of six performers that night; he wasn’t even the only one recording an album.  I was there because I was a big fan of the fourth act, Rock Garden, and because I had long wanted to hear the third, The Maranatha Singers, and because this was, in its own way, a moment in history.  New Milford’s Maranatha Church of the Nazarene had sponsored the first major multi-artist Christian rock concert in the northeast, precursor to–well, that’s a bit of history in itself. 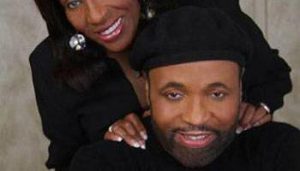 The church, home of the Maranatha Coffeehouse and Maranatha Band, decided to attempt to run a concert in Carnegie Hall, and so completely oversold the hall that they filled the large church across the street.  I don’t remember what they called these, but it was the first of, if I recall correctly, four such concerts over the next several months.  The second I know I attended, but of it cannot remember more than that it was originally intended to be in Madison Square Garden, but as that proved too ambitious it was moved to the smaller Felt Forum there.  I do not recall the third at all, but the fourth was held in three different cities and featured then-popular premillenial author and speaker Hal Lindsey (The Late Great Planet Earth).  I always perceived them as the precursor to what I think was the first east coast Woodstock-like Christian rock festival, Jesus ’73, held that summer.  I didn’t make it there, but my friend Jack Haberer took my cassette recorder, a stack of tapes and a batch of batteries, and brought back teachings from such people as Stuart Briscoe and Tom Skinner, which I listened to time and again for many years.  This was the beginning of that.

Of course, Crouch’s involvement was in a sense incidental to that.  Still, he was a major artist for decades, winning seven Grammies and six Dove Awards and several other recognitions.

What Andraé did was something like what The Imperials did from the Southern Gospel direction:  he brought the stylings of Black Gospel into Contemporary Christian Music.  The way the music would end and then abruptly restart to sing the chorus again, the soul counterpoint vocals, these were mostly new to the mostly young mostly white Christian audiences of the Jesus Movement.

It actually bothers me to say that, because I read a review of the concert a few days after I attended it, and the critic credited the excitement there to those things.  I want to say that Andraé had an unquestionable anointing in his music.  God clearly gave him a gift–and the story has been told about that gift.

The story is that Reverend Crouch’s church had no piano player, and were praying about what to do about their unaccompanied music.  Suddenly, unexpectedly, the Reverend called his grade-school boy to the front, and said, “Andraé, if God gave you the gift of music, would you use it for his glory?”  The eleven-year-old Andraé said yes, the church prayed, and two weeks later he began playing the piano in the church–and continued playing for decades.  It was rumored that eventually someone attempted to teach him to read music, and he couldn’t grasp it, although eventually he managed to get past the basics to work more broadly in the music industry.

I never owned an Andraé Crouch album; I’m not sure I heard one until Finally was delivered to the radio station.  However, I knew quite a few of his songs.  I taught the Luther College Agape Singers to sing Jesus Is the Answer, and still today I often find myself singing fragments of It Won’t Be Long–I love the part, Count the years as months, count the months as weeks, count the weeks as days, any day now we’ll be going home.  I remember singing Through It All (this video includes Andraé telling the story about receiving the gift of music) while paddling through rapids on rivers in the Adirondacks and on the Delaware.  Looking over his discography, I immediately recall The Blood Will Never Lose Its Power, I Don’t Know Why Jesus Loved Me, and My Tribute (To God Be The Glory).  Even people who weren’t fans knew some of his songs; some of those wound up in my aunt’s Southern Baptist hymnal, and Jimmy Swaggart (who preached against any possibility that God could use contemporary Christian music) recorded at least one that I recall.

His twin sister Sandra (behind him in the featured photo) sang with him in the early days and also had an illustrious career, with a Grammy of her own and several solo albums, but I never heard her outside of her work with The Disciples, the name of the band for most of his early career.  He was embraced as one of the Contemporary Christian artists of the time, and appeared on the later Keith Green tribute album First Love with quite a few other artists in our series.

His first album was released in 1968; he died in 2015.  Between those times, he contributed a great deal to Contemporary Christian music and to music generally, and to the advancement of the Kingdom of God.