This is mark Joseph “young” blog entry #294, on the subject of Servant’s Waters.

I have this story fairly reliably from the mouth of one of the band’s founding members.  They were one of the Christian rock bands of the day, going from church to church and religious rally to religious rally in their tour bus.  One day on their way to somewhere the bus broke down.  They limped it into the first parking lot they found, which happened to be a bar.  Using the phone there (remember land lines?) they informed people that they were stuck and determined that they could get someone out to repair the bus the next day, but were just going to have to stay where the were for the night. 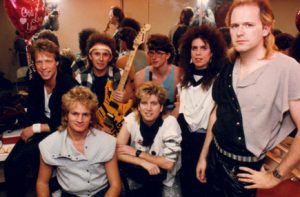 The proprietor suggested that as long as they were stuck there anyway, he would pay them something to play in the bar that night.  They weren’t going anywhere, and a bit of money toward fixing the bus would certainly be welcome, so they accepted his offer and set up their equipment on his stage.  They opened their set with the one secular cover they knew–I’m afraid I don’t now remember whether it was Johnny Be Good or Sloop John B, but it was the only non-original song they knew.  Having finished it, they kind of stared at each other for a moment, and decided there was nothing for it but to push forward with their all-original Christian rock repertoire.

They were well received.  They continued on their tour the next day, but they had discovered something, and they began shifting what they were doing to take them more and more into secular venues, places where people actually needed to hear the message.

I didn’t know all of that, but I knew that Servant was one of the legends of the time, taking Christian rock music into secular venues.

Their album Shallow Water reached the radio station shortly after I did, and I would not have guessed it was their first; it is, at any rate, the earliest to appear on official discographies.  It is well constructed and well performed throughout, sounding more like the work of seasoned artists who know what they’re doing than a debut.  The opening title song set the tone for a ministry that challenged Christians to give up comfortable lives in favor of radical ministry.  Other songs on the same theme included the somewhat gentler Rich Man, and the powerful and memorable Cup of Water.  It closes with the upbeat Fly Away.  Throughout the mix of multiple vocals with powerful rock instrumentation gave them a distinctive and powerful sound.

I have fewer memories of Rockin’ Revival, which came out two years later, but Ad Man attacked the dangers of modern commercialism (“The ad man is the prophet of the century, making all his profit off of you and me”), and it closes with the fun and encouraging I’m Gonna Live.

They did it again with World of Sand, with songs like New Revolution, but the favorite song on this was the gimmicky tribute to Christian rock music, Jungle Music, whose insider references in the closing dialogue montage included people like Larry Norman, Resurrection Band, Daniel Amos, DeGarmo & Key, Barnabas, Petra, Fireworks, Sweet Comfort Band, and themselves.

When they released Caught in the Act of Loving Him, I had the opportunity to see them live.  They not only put on a dynamic musical performance, they put on a complete show.  The lights were synched with the music, including flash pots and lasers.  The male lead vocalist trained as a gymnast and was in constant motion including standing flips on stage.  They were engaging on every level.  Meanwhile the songs continued to challenge, including the memorable Now Is the Time and perhaps my favorite, the album opener Burning Bridges (“…give me light”).  Critics suggest that with this album Servant was transitioning from headbanger rock to new wave, which is more than I know.  I only know that they continued to be one of the best acts in Christian music, and one of the most challenging music ministries out there.

I never heard anything from them after that, but their discography shows only two more albums, the last in 1985.  There was also an album in the midst of this entitled Remix, and when I asked them about it in an interview they said please don’t buy it, as it was released by a record company that they had just left who decided to try to profit from their popularity by doing (often poor) remixed versions of a number of their songs and putting them on a new album just as World of Sand was hitting the market.

Apart from that one album, I never heard anything from Servant I wouldn’t recommend whole-heartedly.  It’s easy to forget just how good they were.