This is mark Joseph “young” blog entry #244, on the subject of Missed The Archers.

Somewhere in the back of my mind I knew there was a Christian band called The Archers.  I knew quite a bit, actually–that it was a sister and two brothers of that surname with a backup band behind them.  I had seen somewhere an album cover of three faces, one of them a smiling blonde girl.  I think I never heard them, but somehow I must have done so because I had a notion of what they sounded like, and now scrounging through videos of their songs I find that notion to have been if not strictly correct at least comporting with what I would have thought at the time. 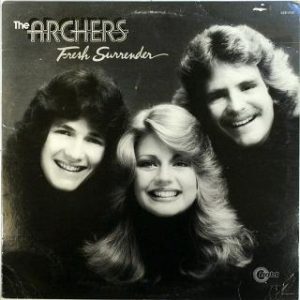 That assessent was that they had a pop sound that did not really appeal to me nor to most of my peers.

That’s not a particularly fair assessment, in a sense.  In researching this I listened to more than a few of their old songs, and they did a broad range of pop sounds from Gary Puckett and the Union Gap to the early disco-era Bee Gees to a bit of funk.  Their music was technically well-performed, with tight vocals and solid instrumental support, and they had some excellent lyrics in the mix.  Even so, when I try to listen to them while driving my wife always wants to change the music to someone else.  While they were probably recognizable from their voices, it never felt like they had anything uniquely original about their sound–of many of the artists of the time, there was always something about the way they played the guitar or the piano, or the vocal arrangements and frills, or the musical stylings, that so characterized them that you could recognize them when they were providing backup on someone else’s album.  The Archers thus were arguably very good, but not very interesting, that I recall.  They were a Light Records act back in the 1970s, and apparently kept going for quite some time, because as we noted that’s what musicians do.

Since I can’t really say I know any of their songs despite having recognized some (many of which I thought or even knew I heard from other artists), I’m not linking any videos here.  However, they have a MySpace page entitled The Archers | Listen and Stream Free Music, Albums, New Releases, Photos, Video, which I have discovered but not explored, so if you are an Archers fan, they must have been out there not very long ago (since the MySpace rebuild, anyway) and you might be able to catch up on what they’ve been doing.

For my part, I’ve got a lot of artists ahead who interest me much more.