This is mark Joseph “young” blog entry #264, on the subject of How About Danny Taylor.

Many of you are asking, how about whom?  When I mentioned, though, that Andraé Crouch was not the only artist recording an album during that concert at Carnegie Hall, well, Danny Taylor was the other.  He had already released one album, Taylor Made.

Living in northern New Jersey we thought of Danny as a local boy.  Word was he lived somewhere nearby.  I only recently learned that he had stayed at the Love Inn in Freeville, New York (previously mentioned in connection with Ted Sandquist).

The quality of that first album was not great, even by the 1972 standards.  However, Jesus People bought it because there weren’t that many Christian albums out there.  The songs on it were all right, but the only one anyone ever mentioned was the penultimate track, How About You.  Jeff Zurheide and I covered it, and we did not cover many songs.  I’m not sure what the appeal was–maybe it was the somewhat goofy opening line, “Railroad tracks are tied, how about you?” which was delivered in complete seriousness.

A colleague, a fellow college-aged musician running his own band in Bergen County, once wrote to Taylor and sent him a tape.  He got a polite reply, eventually, saying that he had to work on his lyrics.  I remember that a lot of Nick Berezanski’s lyrics (I’m not going to swear to the spelling of his name, but I will say that his band was named The Tetragrammaton Life Saving Bank with the Dust of the Earth and I Don’t Know When He’s Coming So Be Ready) were rather clever, but his guitarist admitted that Nick sometimes had trouble with them.  That, though, is kind of off-topic here.

At the radio station we had a copy of his other live album, I’m Not a One-man Show, recorded with a band in Kansas City and having much better production values across the board.  He released a few other albums, but I never heard any of them.  I’ve seen a couple of discographies of him online, both incomplete, and am unable to find a track list for either live album. 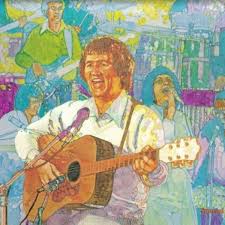 However, I clearly remember the novelty song from the later album, Snatchin’ All the Children.  In fact, twice I played at a local coffeehouse, and one of the other artists playing there the same night performed the song.  We got to talking, and he said that he’d been part of Taylor’s band for a while at one point.  I wasn’t certain whether I should be impressed–it’s that local boy thing, that I didn’t ever really think of Taylor as one of the top musicians in contemporary Christian music even though he was really rather good and one of the earliest.

He died in Nashville in 2010; his obituary mentions more about him, including that he toured with Randy Matthews and Mike Johnson for a while.