This is mark Joseph “young” blog entry #276, on the subject of Best Guitarist Phil Keaggy.

The rumor was always that Jimi Hendrix claimed Phil Keaggy was the best guitarist in the world.

The way I eventually heard the story, Hendrix was being interviewed and was asked what it was like to be the best guitarist in the world, and he replied, “I don’t know, ask Phil Keaggy.”

Keaggy always maintained that Hendrix never said he was the best in the world, and I suppose you could take that version of the story in a way which doesn’t say that.  On the other hand, Keaggy was and still is an amazing musician. 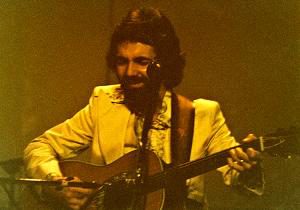 He began with a band called Glass Harp, and they were a more than moderately successful ensemble–they recorded a live album in Carnegie Hall sometime in the early 1970s, but it wasn’t released until the late 90s, after Keaggy was more than established.  For most aficionados his first Christian album was the breakthrough, and the title song What a Day put him on the map, showcasing his lead stylings.

It was again the title song of his next album, Love Broke Thru, which caught the ear; it was also recorded by its co-writer, still ahead on our survey, and although people still debate which version is better, the song propelled both of them into the spotlight.  It led to a tour and concert album with 2nd Chapter of Acts, under the title How the West Was Won, a good album which never achieved the greatness of To the Bride.

This was followed by a more fusion-styled album, The Master and the Musician, from which the only track I remember was the instrumental Agora (The Marketplace).

Not long after I arrived at the radio station, Ph’lip Side landed on our desk.  It was a much-played album, from the rocky opening A Royal Commandment to the gentle mostly acoustic closing I Belong to You, but the big cut for us, coming out when a major movement was bringing a Crisis Pregnancy Center to our local city, was Little Ones, still one of the most powerful songs in defense of the unborn.

I don’t recall ever having seen, let alone heard, the album Town to Town, but somewhere I still have a vinyl copy of Play Through Me, and whenever I think of Keaggy the first song that comes to my mind is probably the opener of that album, Happy, which is instrumental for probably four-fifths of its run.  Obviously, if I owned the album I heard it, probably many times, and would probably recognize any of the cuts from it, but the only other title that rings a bell is Nobody’s Playgirl Now.

Keaggy is still recording, so there’s a lot of his stuff I’ve never heard; but there was one more album he released in that last year before I left, and as 1983 came to an end I put it on a list of the ten most significant Christian albums of the year.  The album was double-titled, The Private Collection Volume I (there doesn’t appear to have been a Volume II) and Underground.  I recognize one track title from it, What a Love, but the quality of the music or the memorability of the songs was not what was significant with this.  It was the way it was produced.

TEAC, one of the leaders in recording equipment of the era, had released an all-in-one recording studio that used two cassettes–that’s right, cassettes, those tiny little tapes that were always getting chewed up inside the players but which abruptly produced a remarkable audio quality with the development of “metal tape”–to record four tracks on each and permit mixing from one tape to the other.  Keaggy sat at home and laid track upon track, drums, guitars, bass, multiple vocals, all using this gadget, and came up with an album that was at least passable by the standards of the day.

I say passable, but in a sense it wasn’t.  Sparrow Records, which at the time was contracted as Keaggy’s label, felt it was below their production standards, and if you listen to the album on good equipment and attend to the background tracks, you can hear the kind of distortion one gets from copying one tape to another repeatedly (I’ve done it, using a pair of TEAC 3340 reel-to-reel decks and a Tascam 3 mixer; alas my children destroyed those tapes).  Sparrow found itself in a bind, because the music was excellent but the production was below par, so they created a new label, Nissi Records, for the purpose.  I understand the label eventually carried more of Keaggy and several other artists, but I was no longer in touch with the industry so I don’t know the details.

To me, though, this was significant.  In the late 50s and very early 60s it was still possible to record a song in your garage on a small reel-to-reel recorder and have it break through to be a national hit.  By the early 80s hourly rates for studio time for the quality required to make a major label record ran six digits.  Keaggy’s record was the first glimmer of the possibility that it was still possible to make good recordings of good music at home at a not completely unreasonable cost.  It was well outside my budget as a barely-above-minimum-wage Christian radio DJ and PD, but it was not impossible to imagine being able to afford such a thing, even though I never could.

To wrap up, in college I knew someone who said that Keaggy was technically brilliant and undoubtedly impressed other musicians with his skill, but he found the music boring.  He did impress other musicians.  I attended a live solo concert of his in the early 70s, and he would perform these incredibly difficult pieces, and then give an embarrassed laugh and comment that he should have practiced that one.  However, I recently encountered evidence that Phil might just be the best guitarist in the world, in his live rendition of True Believers (video begins with an extended spoken intro).  He is obviously using some fancy equipment on his acoustic guitar, such as one or more ditto boxes, but even so the performance is technically brilliant, and the audience recognizes it.  He does things I’m not sure I could even tell you how to do, and I’ve been playing for almost as long as he has.