This is mark Joseph “young” blog entry #260, on the subject of Lamb and Jews for Jesus.

I had heard of Lamb long before I heard them.  I think I even knew that their names were Joel and Rick, and I knew that Rick was a goy and Joel was Jewish.  They were a tip of an iceberg floating in the sea of the Jesus movement, of which Moishe Rosen’s organization Jews for Jesus was the other visible tip:  Jews embracing Jesus as Messiah.  I knew they were out there, they were happening, they were said to be good. 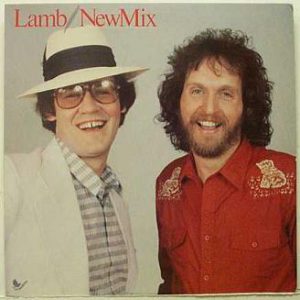 It wasn’t until their sixth album, in their eighth year, that I heard them.  That 1981 album New Mix was a bit different, and particularly different was the hit song Jonah.  Guitarist Rick “Levi” Coghill achieved the vocal effect with something called a “voice tube”, then a relatively new gadget that enabled the guitarist to control the “packaging” of the guitar output by singing into the device, combining voice packaging with guitar pitch.  Vocalist Joel Chernoff captured the drama of the song quite well.  The rest of their music has a very Jewish folk feel–well done and beautiful, and they were on the charts before and after I was involved in radio.  Sing Hallelujah, from their earlier Songs for the Flock LP, is perhaps more typical of their sound..

It is perhaps peculiar that Jonah is the only song of theirs that I remember, but it was quite a memorable song.  I saw them perform it live, and they managed to capture most of the flavor of the song with just the two of them on stage.

I caught up with Rick after that concert.  He was engaged in a discussion with a fan who was very disappointed that the band didn’t have an “altar call” and invite the unsaved to pray for salvation.  His answer was quite interesting.  He said that no one gets to a Lamb concert who doesn’t already at least know what they have to do to be saved.  They might not have decided to do it, but they don’t really need to be told or walked through it.  It seemed to me he was right.  After all, the concert, like probably ninety-five percent of the Christian concerts I attended, was in a church (and another 1% were at specifically Christian events like Creation).  By 1981 there weren’t many people who might have attended such a concert who were not Christian and hadn’t heard the gospel.  Rick and Joel weren’t so much there for the few unbelievers who might have been in the audience, but for the believers who filled the hall.  It showed a keen understanding of the purpose of their ministry.

Online discographies report that the final album was released in 1990, after which there was a compilation CD of their earliest work in 1993.  Joel’s Lamb website reports that he continued to perform and record, and in 2005 released an album with another guitarist replacing Rick.  I find nothing more recent but a Facebook fan page, which is not currently very active.  Still, 1973 to 2005 is a respectable thirty-two year run, and the band more than anyone else defined Messianic music.

Jews for Jesus is still alive and well, and will gladly come to your church to present the Jewish roots of Christian faith and practice, including images of Christ in the Passover.