When I first arrived at the radio station early in ’79, I had heard of Resurrection Band.  They were known to be the cutting edge of Christian rock music at that time.  However, I had never heard them.  My first exposure came when our program director handed me the recently arrived copy of Rainbow’s End and told me we were never going to play it, so I might as well take it home and enjoy it. 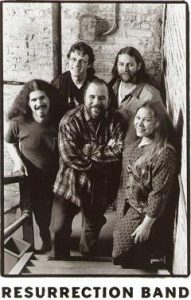 I’m sure I listened to it once.

I don’t think I would say it was too much for me.  Rather, the distortion levels were so high that I couldn’t make much of it.  Wendy and Glenn Kaiser shared the vocals, and they both had very gravelly voices.  I often thought Wendy sounded a lot like Janis Joplin, although I’ve read others say she was reminiscent of Grace Slick.  I never cared for Joplin’s voice, and Wendy’s grated on me similarly.  Its best feature was that it blended well with Glenn, who although rock-rough was easier to hear.  When I try to think of the band’s typical sound, I always recall Wendy’s song Area 312, a somewhat cryptic reference to living in Chicago (312 was the Chicago telephone area code–remember those?).

I met Glenn sometime in ’82 at a local concert, where he gave me a copy of the DMZ album about a week before the record company released it.  I immediately fell in love with No Alibi; it is still my one go-to Rez Band song, and I have a good story for it.  You’ll remember that our station management had trouble with the concepts of Christian Contemporary and Rock Music.  The first time I played this song on the air I did so with some trepidation, concerned that we were pushing the envelope beyond what the management would accept.  In the middle of the song the general manager walked into the studio and said, “What is this?”  A bit nervously I replied that it was No Alibi from Resurrection Band‘s newly-released album DMZ.  She said, “Those are great words,” and turned and walked out of the studio.

I believe I said, “Yes!” in a most emphatic way.  It is a fabulous song.

I next encountered Glenn at Creation (’82, I think), where Resurrection Band was leading Sunday morning worship with songs like I Need Your Love.  I was backstage with Jeff Duffield, who with his wife Sue toured the church circuit with a Gaitheresque Inspirational/MOR sound.  He commented to me that he simply did not understand how music like this could be used for worship, yet it was obvious that the people in the crowd had hands raised and eyes closed and were singing along with their focus on Christ.  A few minutes later Glenn came our direction, and I mentioned this to him.  He recounted being at a festival on the west coast where one of the artists was a Christian punk rock band.  As he listened from back stage, he was thinking, “Lord, how can You use this?  How does this glorify You?”  Yet as he looked out at the crowds, he saw that the band was reaching the audience–and he felt so convicted, because he was passing the same kind of judgment on the new musical styles that had been passed on him.

I have had contact with Glenn over the internet sporadically since then.  Wendy turned her attention to raising their family, and Glenn shifted to Christian Blues with The Glenn Kaiser Band.  They’re leaders in the Jesus People USA organization in Chicago.

One does not stay the leader forever, though.  Not long after DMZ came to us, we received a single–a six minute single on, if memory serves, a ten-inch disc–from a new band called Barnabas, under the title Waiting for the Aliens, from their forthcoming album Approaching Light Speed.  I believe we played it once, just so our listeners would know it was out there–although it was very good and very well done.  Rez Band had blazed the trail for such bands to follow, and more would follow in the years ahead.