This is mark Joseph “young” blog entry #453, on the subject of The Song “Never Alone”.

My recollection is that I wrote this while touring Romania in the early summer of 1972 with a select group from the Ramsey (New Jersey) High School chorus.  I believe I played the first verse for Geoffrey Haberer, and he didn’t like it.  That didn’t stop me from making it a staple of the repertoire of The Last Psalm early in 1973, until we lost enough people that we couldn’t do the vocals. 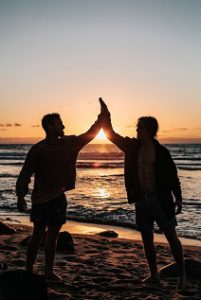 I had had some encouragement.  After returning home from Romania that summer I had served as a counselor for a junior-high music camp, and another staff member sang this with me as a duet.  He was a black pastor, and immediately saw what I never had said I intended, that having him sing the verse about the guy leaving Kentucky would give another dimension to the song.

This vocals-over-midi-instruments recording was part of the nostalgic collection of Last Psalm songs recorded for Jes Oldham.  It was one of the songs that utilized all five voices, as I sang the first verse, Peggy (Lisbona) the second, Jeff (Zurheide) the third, Ann (Hughes) the fourth, and Ruthann (Mekita) the last, with four voices on the choruses and five on the final bridge.  Not having a black member of the band until John Miller joined us when we no longer had enough vocalists to include this song, I gave the Kentucky verse to one of the girls for a similar reason.  I’m afraid that Ruth’s vocal range is daunting, and I had to adjust her parts here on the bridge and particularly on the last verse to be able to do something that approximated them, because she went considerably higher than I could manage at the time of this recording.  I had written the song with the one guitar “lead” introducing each verse, and then when the band did it added the second lead above and worked out the bass part below.

The song has five verses, and each verse has a couplet that tags to its chorus.  When in the early aughts I went to record it, I had a lot of trouble trying to recall all five tags–I remembered mine, and I remembered Jeffrey’s, but the others were all eluding me.  I asked Jes, who had briefly sung as our alto before she left and Ann replaced her, if she remembered hers, but she did not.  I am ninety-five percent certain that these are the original couplets, but only about eighty-five percent certain that I have them on the correct verses.  It is a country song, and although it isn’t exactly funny it is light-hearted overall despite its core message.

To the girl who left Virginia when I said that I was on my way,
I just can’t even begin t’ tell you what it’s like to live my life this way,
People always runnin’ out on you just when you need them most;
Praise the Lord, I held together through the power of the Holy Ghost

To the guy who left Kentucky when he heard that I was movin’ in,
I suppose that I was lucky that I didn’t have to live with him,
For they say if I lived next to him, he’d drown me with his gripes,
But you know I’ll always love him with the love that comes from Jesus Christ.

To the guy up in Chicago who once hit me in a hit and run,
Well, I just want to tell you about God’s only Son
Who died upon a wooden cross, and rose to be a king,
And if you don’t know my Jesus, then you don’t know anything.

Because you’ll never be alone when you’ve got Jesus.
He will always be beside your side.
He will never leave us or forsake us,
He said so and you know He never lied.

To the men in San Francisco I just simply want to say
That I know that Jesus loves you all out by your little bay.
‘Though I’ve never even seen you, I believe that you are real.
I’ve got proof in my Lord Jesus, and I know the way I feel.

To the people in New Jersey I just simply want to sing,
‘Cause I know that Jesus loves me and will give me anything.
But it’s still a two-way bargain, there is something back from me:
I just give my life to Jesus, that’s the way it’s gotta be.