This is mark Joseph “young” blog entry #450, on the subject of The Song “Rainy Days”.

This song doesn’t really belong here; I did not write it. 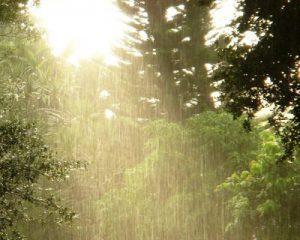 It was written by my good friend Arthur Lee “Artie” Robbins, who played with me beginning in eighth grade, before The Last Psalm, as bass guitarist in BLT Down and for Genuine Junk Parts before that, and as an acoustic and vocals duo before that.  He wrote this as a love song probably in eighth grade, and when BLT Down became The Last Psalm he, being Jewish, left.  I needed material, so I changed a few words and continued using the song; I also wrote the triple lead, but it was only ever a double lead until that band’s last concert, when we had both Andy Nilssen and Annette Young so could run two bass guitars and she played the third lead on the six-string short-neck Wurlitzer while he handled the bassline.  The song also had an improvised lead which segued into the triple lead, but I omitted that.  I also omitted backup vocals–during the last verse while Peggy was singing the melody the other four of us each had one note in the chord in an “ah” which we slid down from the E chord to the D, singing off mic, but I couldn’t sing the high E when I was finally recording this and couldn’t figure out how to make the midi vocals slide together or sound off-mic.  It’s a rather poor recording–I felt I needed chords behind the triple lead, and I didn’t want to add another guitar to two guitars and two bass guitars during the singing (and anyway, we didn’t have another guitarist) so I use the piano, and the mix was all wrong bringing the chords too far forward and drowning out the leads.  But you can hear them if you listen closely.

So why is it here?  It was one of those vocals-over-midi-instruments recordings made as part of the nostalgic collection of Last Psalm songs recorded for Jes Oldham entitled When I Was Young.  It is the only one of those which I did not write which I recorded, although Ruth has asked me about her song Lord, Lord, which we stopped singing when she left us but I might record for her if I get some new software working.

The rain, it pours and pours all day.
It turns the skies all cloudy and grey.
But inside my house the sun still shines,
‘Cause the Lord of Love, I know He’s mine.

Rainy days may come my way.
I guess we’ll have to make due,
‘Cause even if the skies are cloudy and grey,
I still know that I love you.

The rain, it pours and pours all day.
It turns the skies all cloudy and grey.
But inside my heart the sun still shines,
‘Cause the Lord of Love, I know He’s mine.