It is difficult to know what to write about this song, because I wrote about it before.  Back when it was written, I posted web log post #181:  Anatomy of a Songwriting Collaboration, in which I described how beginning with the memory of something Jack Haberer posted in our high school yearbook I engaged my youngest son Adam in constructing this song.  Here I offer this recording, done in my living room with an acoustic guitar in competition with an air cleaner, not long after a hospitalization so I would have a recorded copy.  There is an earlier recording on another web site somewhere, linked from the previous article, in which Adam is playing the piano. 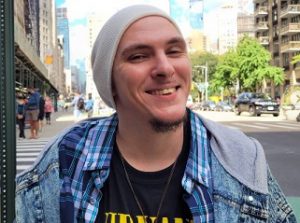 Tristan did not mention the song on his list; I suspect he had never heard it, as it was fairly new and he was not at our house much.  I placed the song itself at twenty-ninth, and the recording, flawed as it is, at thirty-second, which tied it with the previous song, Trust Him Again, at thirty-second overall.  The progressions were mostly somewhat common, and although I liked the lyrics I admit that there are spots where I’m not at all sure what Adam meant.  But it is a good song, and I’ve performed it at least once or twice live despite the fact that I rarely get to perform live anymore.

You want what you want.
You get the joy, he took the pain.
You get what you get:
Redemption sustains, sin is a stain.

Thank God for what He’s done
To set us free.
He gave His only Son
For you and me.

Next song:  Fork in the Road