This is mark Joseph “young” blog entry #399, on the subject of The Song “Look Around You”.

This is one of the early ones.  I am reminded that it’s early, because it has brass parts (lost in the mix, but you can hear them in your left ear faintly if you’re wearing headphones).  The Last Psalm had a brass section in the first half of 1973, which dissolved when my seniors graduated.  I remember John Ford on trumpet, a younger trumpet player whose name I don’t recall, Barbara Unrath on french horn, and a trombone player, I think his name was something like Steve Gruber. 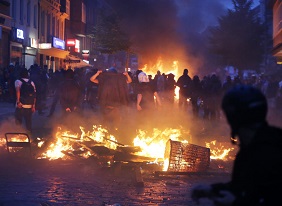 For a song that old, yes, there are a lot of anecdotes.  I remember that the trombone player never made it to a single rehearsal.  The funniest was when he invited us to rehearse at his house and was there while we set up and then said he had to go somewhere and left us rehearsing at his house while he went out.

We did the song with The Last Psalm, much the way I did this recording, with Peggy Lisbona and I trading vocals back and forth on the verses and the others coming in for four-part harmonies on the choruses.  The last year John Miller sang with us, a black student who brought a couple of spirituals to our repertoire, but not on this song; but at one of the rehearsals as I was singing the first line, “all you see is darkness”, I hyperemphasized that last word and looked right at him, and we both cracked up and the song fell apart.  But the song stood us in good stead for the entire run of the band.

I redid it with Collision, transposing the brass to the keyboard.  I also wrote a part for John Mastick to play on a euphonium, at his insistence that he wanted to join the band as our second drummer and sometimes brass player, but I think he realized that a hundred fifty miles was too far to travel for rehearsals, and he never made it even to one.  (What is it with brass players, anyway?)  I remember worrying that Baxter would goof, because there’s one chord in the chorus that’s an A minor the first time through and an A major the second time, but he never once got it wrong, which impressed me.  We only had two voices with Collision, but were adding a third in that final year before the band dissolved.

This recording is one of the four vocals over midi instruments ones I did when Jessie Oldham asked me to get her a recording of Last Psalm music.  As I mentioned, I’m trying to sound like Peggy on some of the lines, but her voice is better than that.  Tristan did not list this song among his choices, and perhaps because it seems dated to me I ranked it number thirty for the song itself–but the recording and performance is pretty good, thirteenth on the list, which pulled it up to number 25 overall.

Look around you, all you see is darkness.
Ev’rywhere the world is in despair.
‘Though we try to tackle all our problems,
We can’t find the answers anywhere.

But Jesus died that we might live.
You know He gave His life, ’twas all that He could give.

Many people say there’s no solution
To the problems that we all must face:
Sex and drugs and crime, war and polution,
And the hatred in the human race.

But Jesus died that we (that we) might live.
You know He gave His life, ’twas all that He could give.

He gave His love to me for all time,
So why is it that I can’t give Him mine?
He said He loved me, too,
And all I gotta do
Is ask Him in, believe in Him, and let His love shine through.

So it’s time that you made your selection,
And decide which way you’re gonna go.
Do you want to go your own direction,
Or let Him lead you to this peace I know?

Next Song:  Love’s the Only Command