This is mark Joseph “young” blog entry #441, on the subject of The Song “Fork in the Road”.

John David Mastick, drummer from long ago in The Last Psalm (and, incidentally, Jacob’s Well), has been nagging me for this song since he first became aware that I was posting songs.  I hope he’s not too disappointed in this version of it. 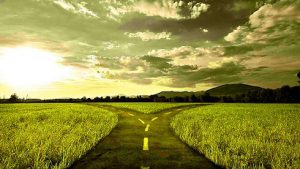 The song goes back to my high school days, and is rather blatantly inspired by the Robert Frost poem The Road Not Taken; I occasionally recited the poem in introducing the song, but honestly even I can see that the words to the poem are better.  It was an effort to create a Christian rock song in a time when these were few and far between.  It always had vocals except on those rare occasions when I sang it solo, in which case the bottom voice part is the melody.

It was first performed by The Last Psalm, probably as early as early 1973.  The first four verses, presented below as one block, were sung, followed by a lead guitar solo, and then the vocals returned with the second half.  It’s difficult to recall the details of back then, but I think after the last line we shifted into a simple riff with an E9 sliding in from a half step below a half beat before the downbeat and another guitar solo, very much a fast jazz sound.  We would eventually do a live fade, and come back with the original progression into a thrasher ending.  Then that fall John joined the band, and we expanded the arrangement by inserting a drum solo after the first guitar solo.  It was very much the typical late 60s-early 70s drum solo, in which the band moved to the wings and the drummer played as long as he wished; I don’t recall exactly how I would know it was coming to the end, but my return to the stage signaled the others to do the same, and John would give us a pickup back into the second half.

This song landed last on the list of thirty-four songs I put forward for consideration, and I ranked it thirty-fourth for the quality of the song; I had come to think the words very derivative and the music very simple.  I ranked the midi and vocals recording found here thirty-third, and with Tristan not listing it that put it at the bottom.  Yet for some reason in 1975 when The Last Psalm broke up, I felt like this was a song I had to keep for my anticipated looming solo career, and I needed some way to fill that instrumental space.  It had, after all, been the band’s real crowd-pleaser.  I got together with Dave Oldham, who had been the band’s sound engineer that last year (and would later play bass guitar in TerraNova), and wrote an accoustic guitar instrumental section.  It was at the time one of the trickiest and most impressive bits of acoustic guitar work I had done, and I very much liked it.  Thus I included it as the instrumental break here.  We also wrote a shorter multi-chord ending, also used here.

When I put it on the repertoire for Collision, I wanted to restore the extended rock-style instrumental work, but not lose the well-constructed guitar instrumental, so I reconfigured the latter to be played by the band (much as in this recording, but with bass and keyboards playing some of the riffs), then went into a more structured improvisational solo section:  the drums played eight measures of solo, maintaining beat and tempo, then the band returned with an eight-measure lead guitar solo, a keyboard solo of the same length, and then a bass solo of the same length, and then returning to repeat with another drum solo, guitar, keys, bass, and do it again, and finish with another drum solo, playing the harmonics bit again twice, and going back to the second half of the song.  We kept the multi-chord ending.  We had only two vocals, so omitted the top voice.

So it has been through a lot of versions, and this recording is neither the first nor the last, nor the best nor the worst, but gives the sense of the song and most of what I perceived as the good parts other than that I would not presume to create a drum solo given the excellent drummers who have done so before me.

Fork in the Road.

I came to a fork in the road of life,
And I wondered which road to take.
I knew what one way would try to build,
The other one would try to break.
The one on the left ran fifty feet,
And disappeared around a bend,
While the right one seemed to go quite straight,
But was too long to see the end.
Looking down the left hand road
I wondered what’s around the turn.
It’s true that I might be set free,
But it’s also true that I might burn.
Then I saw the right road was one
Anyone could take in stride.
‘Though it didn’t look like much fun,
Others would walk by my side.

I stood there for a longer time
Than I’ve ever stood anywhere before.
Add all the choices I had made,
And this one meant a thousand times more.
I walked to the turn in the left-hand road,
Knowing I could turn around.
You ought to know another bend
Was all that I had found.
Went back to the fork, and I started out
Along the other road.
In no time I could see the end,
And all it’s glory showed.
I stand at the fork in the road of life,
And I tell people ev’ry day:
Ask Lord Jesus in your life–
The right road is the better way.

I can only hope you benefit from the song in some way.  I will continue with additional songs in the future.  From this point forward, songs posted will be those that did not, for various reasons, make the original shortlist, in no meaningful sequence.

Next song:  Call to Worship