This is mark Joseph “young” blog entry #326, on the subject of The Song “Mountain, Mountain”.

I ranked this number 15 as far as best songs go, and number 16 on quality of recording and performance, and wonder that I placed it so low, but there were a lot of good songs from which to choose; Tristan, who has learned to play this one of all my songs, had it tied at number 1, which brought it to number 8 on our combined list.  (The ranking system is explained in connection with previous web log song posts, linked below.)    The recording is here.  That’s a WAV file, so it’s rather larger than the mp3s I usually post. 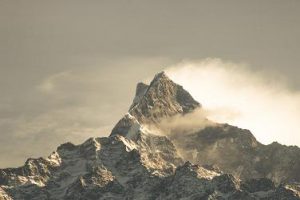 It is hard to know where to begin, but I suppose it has to begin with Barry McGuire.  If anyone out there knows him, please tell him that the song I wrote about him is here, and I would love for him finally to hear it.  I wrote about Barry in my history of Christian contemporary and rock music series in #266:  Minstrel Barry McGuire, where I mentioned the advice he gave me reported, after a fashion, in post #163:  So You Want to Be a Christian Musician.  He is also mentioned in some detail in #268:  Voice of the Second Chapter of Acts and #272:  To the Bride Live, and he will be mentioned again.  Yet it is that first concert, the first time we met, that matters here.

After the concert I joined the throngs crowding around Barry, who had come down from the stage into the audience area to interact.  Barry was then probably the biggest name in contemporary Christian music, but apart from that he is a large and imposing presence both for his size and for his character.  I asked the question I had asked many others, about what someone should do who wanted a career in Christian contemporary music, and he took several minutes to address it.

I returned to my dorm from the concert and immediately wrote this song.  The first verse, the verse about the mountain, was about Barry.  From there I looked for, and found, three other nature images which conveyed something people desire.

I took my guitar to a common area where there would be more students, and played it for several.  I remember Angelic Andy (and I wish I remembered his name, although I have many memories of him otherwise including his parka which matched mine) heard it, and asked me to play the verse about the sun again.  I have found this to be true of the song, that those who like it generally have a favorite verse (mine will always be the mountain) which touches some part of themselves.  My son Tristan insists that the second and third verses should be switched, because the river is connected to the mountain, but I keep them as they are because glory is connected to greatness.

I have met Barry twice since then, as I elsewhere have mentioned.

I opened for him at the Gordon College March Thaw, which I think must have been 1977.  That was something of a fiasco.  Jeff Zurheide and I and a drummer named Ken Spear (or Speer?) were supposed to play backup for Reverend Harold Bussell, former RCA piano recording artist and then our Dean of Christian Life.  Someone had claimed there was a piano in the banquet hall, but when we got there it was a disaster, and although I rushed back to the school to borrow an electronic piano from a friend, Harold wouldn’t perform on an instrument he’d never played.  That left the three of us, and Barry had specified that there shouldn’t be a male vocal band before him so we were faking instrumentals–me on keys, Jeff on guitar, with Ken on drums.  We also discovered about the same time that the school’s portable public address (P.A.) system had been burned out by some previous user, and was not available, so at that point I had to cobble together a makeshift P.A. from a couple of instrument amplifiers and my microphones.  When Barry took the stage he made a joke about how one day he was going to come into a place that had a tin can on a mike stand with strings running to cans on all the tables.  I confess the joke stung, because all things considered it was a decent bit of rigging to get a sound system up and running for him and no one ever thanked me, that I recall.  After the show I caught up with him, guitar in hand, but he asked that I just give him a chance to get out and get some sleep.  This was the second time I had seen him in a year; I figured I would see him again.

It was most of a decade before that happened.  In the early 80s when I was a disk jockey on contemporary Christian radio station WNNN-FM he was playing a concert hosted by one of our bigger supporters, and at the last minute someone arranged an interview with me on the air.  I don’t remember a lot of that interview, but after it I put on something that would play for a few minutes and walked him to his car.  I didn’t have a guitar, and it didn’t occur to me to sing the thing a capella, and shame on me for that.  I have not seen him since.

We performed this with Cardiac Output, and so there is already a page of lyrics for it here.  Perhaps the reason this is low on my performance list is because of that–in Cardiac Output I sang the first verse, Lori sang the second, we did the third in a sort of Simon & Garfunkle duet in which we kept passing the melody back and forth, and the fourth verse was done as a trio reminiscent of Peter, Paul, and Mary.  I didn’t have the sheet music for those, didn’t take the time to recreate them, and wasn’t sure I could make the soprano sound good if I tried, so this recording does not have the vocals which I really did like.

Mountain, mountain, great and tall,
Can you teach me anything at all?
I see your greatness, your majesty;
How can greatness grow in me?
The mountain answered, calm and sure,
“What do you want greatness for?
Be humble, serve in love, and wait.
Only God can make one great.”

Sun, oh sun, up in the sky,
All men see you–tell me why
And how such glory here may shine,
So I can make such glory mine.
I got this answer from the sun:
“Do not be foolish, little one.
I am what I was made to be,
And so God’s glory shines in me.”

River, now to you I turn.
Have you some secret I can learn?
You move mountains ev’ry hour;
How can I control such power?
The answer came to me with force:
“The power is from God, of course.
I do whatever He may ask;
He gives me strength to meet the task.

Ocean, ocean, deep and wide,
I’m asking you to be my guide.
In fullness none may challenge you.
I’d like to know such fullness, too.
The ocean roared–I heard him laugh–
“My fullness you would like to have?
Become, then, empty of all else,
And let God fill you with Himself.”