This is mark Joseph “young” blog entry #316, on the subject of A Gather World.

With permission of Valdron Inc I have previously completed publishing my first four novels, Verse Three, Chapter One:  The First Multiverser Novel, Old Verses New, For Better or Verse, and Spy Verses, in serialized form on the web (those links will take you to the table of contents for each book).  Along with each book there was also a series of web log posts looking at the writing process, the decisions and choices that delivered the final product; those posts are indexed with the chapters in the tables of contents pages.  Now as I have posted the fifth, Garden of Versers, I am again offering a set of “behind the writings” insights.  This “behind the writings” look may contain spoilers because it sometimes talks about my expectations for the futures of the characters and stories–although it sometimes raises ideas that were never pursued, as being written partially concurrently with the story it sometimes discusses where I thought it was headed.  You might want to read the referenced chapters before reading this look at them.  Links below (the section headings) will take you to the specific individual chapters being discussed, and there are (or will soon be) links on those pages to bring you back hopefully to the same point here. 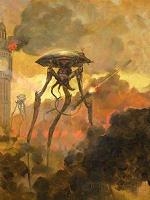 I had been juggling this in my mind for some time, but it was still jumbled when I did the first draft.  Part of it was I didn’t want the Caliph talking through the entire chapter, and part of it was I wanted to have some of it discussed quietly behind the scenes but didn’t really want two scenes from this.  I had put together the details quite a bit before reaching this point, but hadn’t really cemented the presentation.

I wanted another encounter with a smaller mechanical, and this seemed the best way to guarantee that I got it.  I decided that a shotgun probably wouldn’t be enough to damage it, and particularly that you couldn’t get close enough with a shotgun before it killed you, but I wanted Bron to shoot first.  I also figured that a grenade would probably be enough, given the accuracy of Dawn’s shooting.

The problem with opening the door was one I’d had in mind since their departure, and between there and here I worked out that Bron would be the solution, using his blacksmithing equipment.

I had played this in my head a couple times, but couldn’t quite get the detail right.  One of the big bits was what Derek should call the Amir; I also needed to explain why he hadn’t done this already, and thus the reason why the Amir was in the city now but had not been earlier.

I needed to put the marriage in place as at least sort of working, without disrupting the Beam character or making it all copacetic.  I also wanted to avoid sex scenes, which I had to this point avoided with Slade and Shella and would be avoiding with Derek and Vashti.  That didn’t mean they wouldn’t be mentioned.

At this point I had four more Beam chapters slated, thanks to the reorganization.  I had a rough draft of the fourth, in which they arrived in the next world, which meant that in the first they had to make a decision about which way to go which would result in the third in them being killed (I had an idea of what killed them, but it would require them to be in the open).

I knew I had to find a credible way to kill Lauren, and I had some ideas, but none of them were workable until I thought of them drugging her.

At this point I was struggling with the story.  I had wanted Beam to lead the team outside, so that I could knock them out of this world into the next, but I had the same problem he had:  there wasn’t any good reason for them to do so.  Thus instead I was faced with the problem of trying to figure out what they would find if they searched the entire bunker.

I also hit a snag when I started to write about Sophia cooking for them, because of course Beam is a cook and likes to cook.  However, I saw Sophia trying to be “wifely”, and cooking is a natural part of that.  That led to the fact that she generally cooked on wood fires, and needed to be shown how to use more modern technology.

My upgraded outline now gave me the space of two chapters, which I could reduce to one but could not easily expand to three, in which to put Beam in a position to verse out for my final chapter in the new world.

I had had Kondor muse briefly on marriage when Bob introduced Shella as his wife at the beginning of the previous book; now that Derek and Vashti were getting married, there was another opportunity to challenge the skeptical view he took of such matters.

Before I wrote this I knew I was headed into a battle, and that I had set up the notion that some of Sophia’s magic worked, so I was going to need to know what she actually could do in a flatlined mag world.  Not wanting to prejudice my selection of skills, I asked Kyler to compile a quick character sheet with emphasis on magic skills he believed she would have.  I learned a few things, including that she was what he called a “fire mage” who also dabbled in “shadow magic”.  I’m still not certain what that all means, but it’s good to have some kind of background framework.  Having copied the rough draft from him, I gave him the opportunity to make similar suggestions for the rest of the Beam party, but didn’t wait to get them because I already had some fairly good ideas of what was going to happen in connection with them.

I created the idea of a period of quiet that was longish but not too long, and the sorts of relationship and character bits that went with it.  This included that Dawn needed sunlight.  Kyler had mentioned that she obtained her energy from something like photosynthesis, much as the coral bushes in Nagaworld but without the shutdown in darkness they experience.  To this point there had been no suggestion of how she was energized, so I thought I should create the hint here.

Once I started writing this chapter, I ran into the material that was supposed to be the next, and had to find the place to break it and then leave the rest unfinished for the next day (it was late, and I was tired).

I had begun to wonder how I was going to remove Lauren from this world.  After all, every time they attempted to execute her, she thwarted their efforts.  It struck me that they could drug her, and then kill her while she was unconscious; then it occurred to me that they probably would have difficulty giving her an injection, but they could give her drugged food.  Then I realized that they could simply give her drugged food containing a lethal dose, use that to kill her, and be done with the problem.

She immediately begins testing biases, figuring out what skills will work.  She began with psionic skills, that is, those were what she learned first, so she tests them first; the telekinetic flight is also the one that’s obviously useful.  Then she tries magic, but goes straight for the comfort bubble.

The notion of traveling the desert by night instead of by day always seemed a no-brainer to me, for so many reasons.  Thus I see no problem with her reaching the same conclusion as the others, and waiting for dark before finishing her journey.

I needed to have everyone involved in the battle, including Sophia, although her contribution was minor.  I never determined the number of pentapods attacking, or how much damage it would take to stop one, because I figured I could make it credible and a close-fought battle if I didn’t.

I needed to bring Lauren here before Beam arrived, so that there would be no question of the others sensing the scriff of the other versers.  It was something of a juggling game to get it right.  I also used the fact that everywhere Lauren goes there’s a job for her to do to create the tension that drives to the next book.

Probably the biggest challenge here was making it logical that Beam would be aware of the presence of other versers and make a specific effort not to meet them.  His anti-social tendencies served well in this regard, along with his touch of paranoia.