This is mark Joseph “young” blog entry #277, on the subject of Versers Resettle. 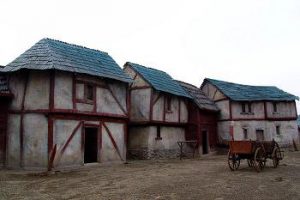 The flyover recon was actually inspired by the fact that I did not expect the windows to close in fair weather, so it was an obvious entry and exit for Morach.

It occurred to me that Bob had told Joe about Derek’s ability to change form, but Joe had not yet actually seen it.  He would not want to appear too interested, but he would be interested, and Zeke gives him the opportunity to tag along and watch.

This was chapter 10 before James Beam was added.

“Magic missile” is of course one of the most popular or best known Dungeons & Dragons™ magic-user spells, but it was also the obvious description of the force ball fired by the kinetic blaster.  I immediately realized it was unlike a D&D™ magic missile, and more like a blunt instrument, so I wrote “invisible hammer” and then decided to tease my audience by changing it to “spiritual hammer”, one of the popular low-level cleric spells.

I was trying to work out the pace for the stories here.  In Spy Verses I often had two characters in one world and one in another, and so I alternated stories, Joe-Derek-Bob-Derek-Joe-Derek.  Now I had three and one, and I was uncertain how to split them—whether to have Lauren every other chapter, or give everyone an equal number of chapters.  At this point my thoughts were that I would do two chapters of the Arabian story and one of Lauren, shifting which of my Arabian story characters to follow.  That arrangement became the framework when I started integrating the new James Beam story.

This was chapter 11 before James Beam was added.  Beam made the character shifts a bit more complicated, but I attempted generally to include a Lauren and a Beam for every two chapters of the other three.

The Pyronics 2000 was my invention for the Mary Piper space ship scenario.  A lot of players like the devastating one-shot weapon, and Kyler included it in this world.  Beam takes it with him, but has to figure out how to recharge it.  Kyler’s version does things that the original version specifically did not do.

The cigarettes were important, because Beam has a couple of addictive habits, and cigarettes are a big one, so having them matters.

It is not established exactly what Dawn is.  I take her to be some kind of genetically created organism, but Kyler has never given me his view, and she’s his invention.

I’m not really old enough to remember hospitals in the 1960s, but this is less a hospital and more an asylum, so I was creating what I thought plausible.  (I was actually in a hospital for an extended stay–acute nephritis–sometime between 1958 and 1960, but my memories of it are all actually of recurring dreams I had of my stay there.)

This was chapter 12 before we added James Beam.

To have Slade do recon also would be overly redundant, but there was a problem for him to consider in why they were expected.  It was something only he could address, because it involved his relationships with elemental spirits.  I thus opened the question here.

This was chapter 13 before we added James Beam

I was fleshing out the city, many of these details devised as I did so.

The idea of the hawk attacking came to me as something to work in at some point, but as I considered it I decided that now was the best time, and it would liven up the book and create a new question:  the guards are looking for some magical creature that invaded the castle, and Derek is that creature.

This was chapter 14 before we added James Beam.

Turbirb’durpa demonstrates several psionic abilities which will become important to his character as the story progresses, even though they won’t always work and he won’t understand why not.

The original description of this entry into the depths of the compound was unclear, and I had to ask Kyler to explain it.  The rewrite attempts to convey the impression that it is damage from an impact of some sort.

I was also confused as to whether Beam’s ears blew because he was using a sonic weapon without hearing protection (which would have long-term ramifications) or because the pressure dropped abruptly.  It was the latter, which a rewrite clarified.

The date of birth problem had been lurking in the background all along, but I wasn’t entirely certain how Lauren was going to handle it until now.

It took several days to complete this chapter, only partly because I was still recuperating from my surgery.

This was chapter 15 before we added James Beam.

On the edit I realized that in the previous chapter (Hastings 141) Conway had said he would be back that afternoon, but everything about this made it the next day.  We added the discussion explaining that; Kyler said it demonstrated Lauren’s sanity, that she was aware of this.

I thought I had two problems coming into this chapter.  One was that I needed to bring Joe back into the frame but had nothing really for him to be doing, the other was that I needed to show that the palace had gone on chaotic alert without disrupting the discussions in Slade’s room.  I realized that the first problem was the solution to the second, and made it work.

The gong was added in editing.  We discussed whether drums or trumpets or something would be better, but decided that my first impulse, a gong, was consistent with the setting.

This was chapter 16 before we added James Beam.

This was the obvious conversation.  Having Zeke offer the simple solution to how to get an audience with the Caliph was I suppose an inspiration–I’d started writing the answer, thinking Slade was going to say it, but then changed my mind and made it Zeke before I’d gotten as far as who said it.

This was chapter 17 before we added James Beam.

I waited quite a while for this chapter, and wrote the other characters through Hastings 150/chapter 50 before getting this, bundled with Beam 7 and 8.  For all that time I had only the first two sentences, but I knew from discussions what Kyler was intending at this point.

I had made this a Hastings chapter, but did not want to go back into one of the psychiatric sessions yet so I changed it to a Brown chapter.  But then I wanted to hold the suspense of the meeting with the Caliph, so I thought about what I could do with Lauren and realized that by now she should be “testing the biases”, seeing what skills worked.

This was chapter 18 before we added James Beam.