This is mark Joseph “young” blog entry #300, on the subject of Versers Challenged. 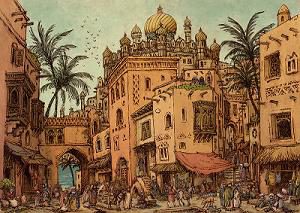 I pretty much gave the Derek-Princess relationship story its head, and this is where it was taking me.  I had decided before it started that the princess and her entourage were being trained in self-defense techniques, and that Derek would join the class.  I remembered his loneliness as I contemplated this chapter, and included that.  I have not decided whether one of the girls falls in love with him beyond the immediate flirtatious infatuation they all have, but I think it at least possible that he would leave this world with a young wife trained in martial arts.

The three paragraphs about reading Gavin’s mind and considering reading Doctor Conway’s mind were written a couple days in advance, and copied here.  The idea of reading the doctor’s mind was Kyler’s suggestion.  He also suggested that Derek would read the minds of the girls, and I’m contemplating that.

According to the outline, this was supposed to be the beginning of a story in a new world; by this point I was thinking I would have to tighten up the Beam story to give it more chapters, so I could fit another world in this book, since I still had another story in this world.

It was Kyler’s idea that the creatures in this version of The Dancing Princess would be efriit, not demons, as a way of setting up a future connection for a world ahead.

I let Beam’s cynicism about marriage have full rein here.

The notion that not all demons are bad is probably mostly attributed in Beam’s thought to the television series Buffy the Vampire Slayer, although it was also heavily influenced in my mind by the Mythadventures books by Robert Asprin.  Both of them treat demons as intelligent creatures from other dimensions who might be either good or bad.

I originally wrote that Derek blushed because he had thought of marrying her (the second time he thought that in the chapter), but I had barely printed it when I thought that was wrong, that he blushed because he had thought of sleeping with her.  It also occurred to me that he must have been resisting the temptation to use his clairvoyance to follow her to her room and watch her get changed.  However, I never incorporated that in the story.

The relationship with Button Nose was one of the decisions I made about the story; I made several others concerning that relationship at the same time, and started working in those directions.  Thus the Brown stories started to pick up.

I knew there would be a short chapter for an interlude before the next adventure; I did not really expect it to be as short as it originally was.  On the other hand, I didn’t see Beam mediating between the girls and their father, and I didn’t see him hanging around for the fireworks, so it was a simple matter to remove him swiftly.

In editing I realized that we were depending on this part of the story to create the foundation for the future claim that Beam had a friendship with the effriit, but that hadn’t actually been included.  This was expanded with the extended conversation between them to provide that.

At this point, with a little help from Kyler, I put together my list of girls:

Rathi, called Rath = Bronzy, for her lighter reddish hair, is the Princess

Scheherazade, called Sch’hery = Pink Cheeks, the dominant one in the group

Leah, called Ley = last one to get a distinguishing feature from which to derive a Derek Name, Green Eyes.

I spent at least a day, maybe two, outlining this in my mind, and then when I typed it I still forgot the part about calling Joe and had to go back and insert it.  I struggled with the names, and then had to get them all involved in ways that would fit the ongoing story.

I wanted Joe to witness the healing, partly because I wanted to avoid writing what Derek prayed and what he experienced, and partly because I’m still giving Joe trouble over questions about magic.

I also wanted to make the medical situation seem real.  Joe should have seen to the sucking chest wound first, but he didn’t know the man’s condition, and since I wanted to cover everyone else first (and certainly he knew that the condition of the “civilian” princesses was going to be of more concern at the palace than that of the professional soldiers defending them) I arranged it such that he got to that man last and attended to him immediately.

Rathi is the name of an online friend of the family from Oman.  She doesn’t like her name, but I hope she doesn’t mind me using it for the Princess.

This was originally slated to be a Slade chapter, but I suddenly felt that the Arabian story was moving too quickly and I was going to run out of story before the other characters were ready, so I shifted to insert a Beam chapter and a Hastings chapter before continuing.

Kyler had wanted to bring in the magic dragon control ring, which is a fun bit of the whole, and I had already drafted chapters related to it for the future, so at this point despite being behind my schedule I needed to start working on the dragon encounter.  It will take several chapters, as the acquisition of something from a dragon seems a necessary part.

I was constantly uncertain about how much to tell, as I am certain a significant part of the audience has already read the previous books; but mostly I am trying to connect the parts where Doctor Conway is likely to react.

Joe was my mystery investigator; Slade certainly knew it.  However, Slade was the person connected to the Caliph, so he would be the one called upon to solve it.  I also knew that Derek was the one with the best information, so the ball kind of bounced from the Caliph to Slade to Kondor to Derek, and then back again.

I had worked out the solution before running the kidnapping, simply because I think that’s the way to do it:  know how the thing is done, then present how it appears, then work through the clues that drop along the way to reveal how it was done.

This was stalled a couple days while I tried to figure out how to accomplish what needed to be done in a way that would be interesting but wouldn’t consume too many chapters.  Fragments of it came over time, but I was actually surprised to get it all into the one short chapter.

One thought on “#300: Versers Challenged”