This is mark Joseph “young” blog entry #425, on the subject of Do Similarities Between the Accounts of Moses Birth and Certain Myths Make Him a Fictional Character?.

The final objection raised by the article is that there are parallels to earlier known writings, and specifically that the story of the birth and early life of Moses has similarities to the earlier story of the Akkadian emperor Sargon the Great of perhaps a millennium before.  Based on this, the article decides that Moses was a fictional character invented when King Cyrus permitted the Israelites deported by Nebuchadnezzar to return to Jerusalem and rebuild their temple. 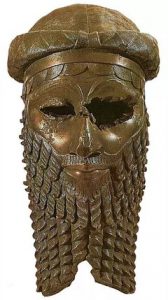 It is certainly true that there are events reported in the Bible that parallel accounts from other countries.  There are several plausible explanations for these.  Liberal scholars (we discussed in the first article of this series) always assert that they demonstrate that the biblical accounts are later derivative versions, but that’s presumptive.  There are many reasons to believe that the Biblical accounts, usually simpler, are the originals from which the others are elaborations, or that both are developed from the same tradition independently.

It also appears that God has mirrored the real historic events of the Bible in the myths of other peoples.  The virgin birth is the reality of the many myths about gods having children through human women.  The resurrection of Jesus is the realization of the imagery of the corn king deities found in many cultures.  It is not impossible that God prefigured some of the early events of the life of Moses in the myth of Sargon, as a sort of prophetic revelation to a people who were not from Israel, pointing to Himself.

At the same time, similarities between Moses and other ancient heroes do not falsify the accounts.  It might be that Moses’ mother got the idea of hiding her son in the rushes from her knowledge of that earlier myth; it might simply be coincidence, that she had that idea which someone else had had earlier.  I’m sure that many of my original ideas have been original ideas previously elsewhere.  There are many differences between the accounts (for example, the inclusion of Moses’ sister Miriam watching him in the rushes), which would mean that if the events as reported about Moses are fictional, they are of a quality of realistic fiction unknown for millennia thereafter.

Further, if you assume that Moses was a fictional character invented as late as Babylon, you have to explain too much about everything else.  To what Law were the psalms referring in so many instances?  At what point do the historic books become actual history, and how did Israel come to exist before that time if not through the events recorded in the earlier books?  The pre-exilic prophets, such as Isaiah and Amos, don’t seem likely to have existed if there was no Torah, or at least something remarkably like it.  And when Ezra and Nehemiah returned from exile to “rebuild” the temple, exactly what were they rebuilding?  Without Moses we have no tabernacle; without the tabernacle we have no original design for the temple.  Pre-exilic Israel simply does not exist in any discoverable form without those documents, and those documents do not exist without Moses.  Or do we want to claim that the entire Old Testament was invented after the last events it records, and foisted on the nation as if it had always existed?  That seems far less likely than the alternative that they are actual historic records.

And if, as is claimed, the events of Exodus were written centuries later to give cohesion to a people leaving from Babylon, why does the story so effectively attack the gods of Egypt rather than the gods of Babylon?

In their last words, the authors of the article reveal that they have an agenda.  They assert that the entire Bible is fiction written for political purposes, and that therefore the Jewish people should abandon any claim they think it gives them to the land it says was given to Abraham.  They are in essence blaming Judaism, and perhaps Christianity, for the conflict in the Middle East, and saying that we should stop thinking that anything in our religions is true so that we can get along with people who disagree with us–as if agreeing with people was either a necessary or a sufficient condition to getting along with them.

I’m sorry.  I’m not a terribly patriotic person, but I do believe that it is true that those we Americans call the Founding Fathers risked and sometimes lost their lives to establish this nation on some Deist/Enlightenment principles about the rights of humans, and that several wars have been fought to preserve the nation they created and protect those rights.  Some things are “true facts”.  Pretending that they are false because you would like history to be different is lying about the past.  Certainly we don’t know everything about the events of the Exodus account, but there’s no absolute reason to disbelieve them in their entirety, or in any particular point raised by the objectors.

And the ultimate problem that liberal scholars have failed ever to answer adquately is, if the Israelites did not escape from slavery in Egypt, travel across the wilderness, and conquer the land then known as Canaan, whence did they come and how did they become a nation?  The most cogent and coherent explanation for their existence is their own carefully recorded and preserved history, and that they did not much matter to the self-important “big” nations surrounding them does not negate that.