This is mark Joseph “young” blog entry #418, on the subject of Are There Too Many People Escaping in Exodus?.

The third objection in simple form reads “A really long line,” which is expanded, “Two and a half million people would have created a line well over 200 miles long (at eight abreast with only three feet between each row) along with their animals, of which the Bible says they had many.” 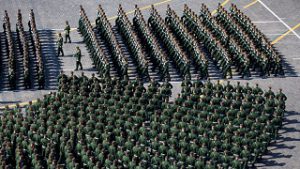 I notice that the number of people just increased by twenty-five percent, from an estimated two million to two and a half million; but it’s an estimate, so we’ll let it slide.  The issue seems to be that a column that long could not outrun Pharaoh’s charioteers.

However, we have a couple of assumptions here.

First, there’s no reason to assume that these people are walking in parade formation.  The author gets this outrageous length of the line by making it very narrow.  I think eight abreast would be roughly twenty feet wide, but we’ll call it twenty-five.  Twenty-five feet by two hundred miles creates a total area of less than one square mile–and there’s no reason to think these people were trying to follow a road or stay between the lines.  We have a mob.  If it formed a circle, it would have a diameter of about two thirds of a mile.

Obviously it’s going to cover a lot of area, and obviously it’s not going to do so efficiently, but the two hundred mile line is an artificial construct that is extremely implausible, created to make it seem absurd.

Of course, we are talking about hikers outrunning charioteers, but whether that can happen really depends on their head start.  We are not given that information.  We are told that when the Israelites departed Pharaoh was glad to see the back of them, but before they reached the water he changed his mind and pursued them.  We don’t know how long it took for them to reach the crossing; we are told that they camped along the way, but also that they traveled by day and night, so they were apparently eager to keep moving.  So given the lack of information on those details, it is not at all implausible that Israel could reach the crossing before Pharaoh caught them.