This is mark Joseph “young” blog entry #416, on the subject of Does Archaeological Silence Disprove the Exodus?.

This is a continuation of a response to the article Ten Reasons Why the Bible’s Story of the Exodus Is Not True, requested by a Facebook contact.  The introductory article was #415:  Can the Exodus Story Be True? 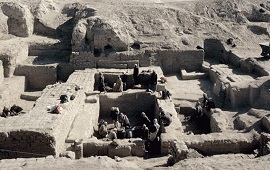 After stating that no scholars believe the event happened (having conveniently eliminated from consideration any that do), the article offers as its first reason that there is “No evidence in history or in the ground,” that is, neither any historical accounts nor any archaeological evidence supporting the event.

Of course, the statement that there are no historical accounts begins by excluding the Bible itself from consideration.  That’s not entirely unfair.  After all, the question is whether the Biblical account is corroborated elsewhere.  We might, however, wonder where else it might have been corroborated.

We are told that the Egyptians themselves did not record the departure of millions of slaves and the embarrassing destruction of their army and death of their pharaoh in pursuit.  While this may seem a problem, the Exodus account gives us events that were embarrassing on many levels.  According to Exodus, before God delivered Israel from Egypt He made a point of upstaging the entire Egyptian pantheon.  To us those plagues seem like somewhat random disasters, but in that time and place they were demonstrations that God’s power exceeded the power of any of the separate gods of Egypt.  For the simplest example, darkness over the entire land meant that God’s power exceeded the power of Ra, the Sun God.  For this story to be recounted in detail, they would be publishing the fact that the gods they worshipped, and indeed the gods whose recognition gave authority to the priests and to the Pharaoh himself, were inferior to the God of Israel.  There is every reason to believe that Egypt took steps, what we would today call public relations damage control.

Beyond that, as Israel entered the land they claimed as their own, they destroyed the civilizations that existed there.  They didn’t destroy all of them, but then Assyria and Babylon came through and finished the job.  By the time of Nebuchadnezzar, there were no countries in the region with historic records to compare.  Israel was the only “little” nation to survive.

We also do have what can reasonably be thought to be cross confirmation.  Assuming that the Book of Joshua was written independently of Exodus, in Joshua 2:10 Rahab of Jericho states that the people of that city were terrified of the Jews because they had heard about God drying up the Red Sea so they could cross.  That means that whether or not God parted the Red Sea, forty years later the people in the Middle East believed it had happened.  That Israel destroyed those civilizations utterly does not invalidate their own report that that knowledge existed.

Of course, that doesn’t prove that the biblical accounts are true, only that they can’t be falsified by this argument.

The famed pioneering middle eastern archaeologist William F. Albright began his career with the belief that nothing in the historical records of the Bible was true.  Over the course of his career he discovered so many things that confirmed not only that reported sites, such as King Solomon’s stables, existed, but that they were exactly where and when the Bible stated they were.  By the end of his career, the early historical books of the Bible were references he used to help locate dig sites.

Of course, the Exodus account is considerably older than that–which is a factor in why archaeology supporting it is so rare.  So, too, is the fact that our Israelites were reported to be nomads, constantly on the move, living in tents, creating no permanent buildings.  There was very little that would have lasted long enough to become archaeological evidence.  About the only thing that might have survived would be the bones of the dead, by now buried so deeply under so much insignificant coverage that no one would know where to look, or what they found if they did.  Even so, there have been finds that possibly corroborate the events, such as ancient Egyptian chariot wheels in the Gulf of Aqaba, one of the suspected sites for the crossing of the Red Sea.  Liberal scholars will generally say that since the miracles never happened, there is another explanation for those discoveries; but if you argue that there is no evidence and ignore such evidence as might be relevant, that’s a losing argument.

So the argument from silence, it seems to me, is essentially saying that if no one else knows the secret it must not be true.  History is filled with secrets and coverups, many of which are true.