This is mark Joseph “young” blog entry #370, on the subject of Characters Confront.

This is the tenth mark Joseph “young” web log post covering this book, covering chapters 49 through 54.  It was suggested that more shorter posts were a better choice than fewer longer ones, so there will be posts every six chapters, that is, every other week, for this book.  Previous entries were: 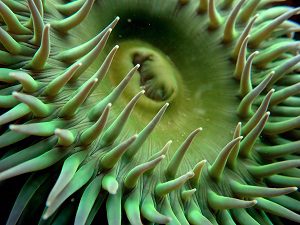 This was an abrupt inspiration.  My mind was working on what was going to be a non-combative confrontation with giant spiders, and how that was going to work, and how boring it was going to be ultimately, when I thought that something like a cave fisher would be a more exciting encounter.  It would, I decided, try to grab someone from the back of the line, so it might go unnoticed.  Then it struck me that Lauren should be in the back, and the one it attacked.  I didn’t want to use a cave fisher because I thought it was probably unique to Dungeons & Dragons™ and it didn’t have quite the threat I wanted, as barbed tentacles surrounding a large mouth would be much more impressive.  As I envisioned this, I realized it was very like a sea anemone (which I couldn’t spell without looking it up), so I went with that and called it a cave anemone.

I had thought at one point that Lauren would fall if she cut the tentacle, but then I realized that for her to turn around and see what had her she was going to need to use her telekinetic flight, so she would be supporting herself.  Then when she severed the tentacle I remembered that she wouldn’t fall, but then that she had been pulling against the creature’s tug, and so like a tug of war she was going to fall backwards.  That was good visually.  I also knew that the people on the ground weren’t going to be able to fire missiles while she was engaged close to the creature, but would as soon as she had moved, and that would end the encounter.

I realized that up to this point everything about Tommy’s story in this world had been moving her toward meeting Johnny Angel, and now she had met him and I didn’t know what to do next.  She would consider what he told her, of course, and that would lead to decisions about actions.

I had dropped the part into the previous chapter about how you can’t live like it’s a dream almost incidentally, but as I considered it I realized that to some degree she was doing exactly that, so I had her realize it, too, and decide to change it.  That meant equipping herself for future travels.

I was stuck enough on this story that I asked John Mastick, on whom Johnny Angel is loosely based, if he might read what I had and suggest something.  He said yes, and very quickly I put together a copy of the entire Takano story up to the previous chapter and sent it to him.  Then he said he had some reading for a class he was taking, so he wasn’t going to get to the story any time soon, and I realized I was going to have to go forward without his help.

I also briefed my youngest son on the entire story to date, and got some feedback from him.

I was a long time trying to figure out how this would work, and when I finally got it I also got what would happen next, when Bron invents his find persons spell.  The tricky part is that the gods of this world try to channel magic spells into technological results, and I had to think of how that might work.

I wondered how to make the spider encounter interesting, and the answer seemed to be to use it as a cliffhanger.  I know it’s going to be a non-encounter because the drow princess has an affinity for spiders and will gain them safe passage, but Lauren doesn’t know that.

I wanted to discuss her nervousness around spiders, but realized that were I to do so in this chapter it would weaken the cliffhanger, so instead I postponed that to her next chapter.

I had been sitting on this chapter for a while, but managed to break through just as I finished the Beam chapter before it.  The chapter was shorter than I wanted, but did what it needed to do.

I don’t know whether the REI store was in Marlton in 1959, but I was looking online for a camping goods store in the Camden area, and it came up, and research showed that it was founded in Washington State in the 1930s so I figured I would take the chance.  I actually guessed correctly that it was out Route 73, although when I wrote that it was just because that’s how I would get to Marlton from most places, and the fact that the store is actually on 73 to my mind makes it more likely that it’s been there a long time.

Originally this had been a group of about fifty adults.  Later the group was about a hundred thirty people, including children, and on the read-through edit I decided that I probably needed more adults for that to be credible, so I made it vaguely more than fifty, and did so in subsequent chapters as well.