This is mark Joseph “young” blog entry #357, on the subject of Characters Connect.

This is the third mark Joseph “young” web log post covering this book, covering chapters 13 through 18.  It was suggested that more shorter posts were a better choice than fewer longer ones, so there will be posts every six chapters, that is, every other week, for this book.  Previous entries were: 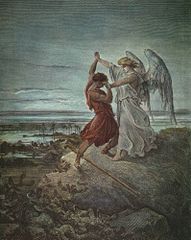 I had been musing on this meeting for a while, and knew the gist of it but not the detail.  The notion that the leaders had missed dinner discussing her hit me right as I was finishing, so I let her solve that.

Malacon the Shining Legacy was an antipaladin played by Ed Porrini.  Most of the players in Ed’s game, and probably all whose names I remember, first played other characters in my game and were invited join Ed’s.

As noted in connection with chapter 18, Ed Jones asked that I remove all reference to features and persons in his game world.  As a result, Valdaronia became Darvania here.

Long after I wrote that the only hemovores in Lauren’s experience besides vampires were ticks and mosquitoes I thought of leeches.  I swithered for a long time about whether to go back and include them, but ultimately decided against that.

Creating a realistic babysitting day was perhaps a bit of a challenge, but I had babysat and been babysat, and I had done tea parties with my sister and the girls in the neighborhood (although I thought them boring).  I need Tommy to fit here without her really trying to do so, and this works, I think.

I expected this chapter to go further than it did, but got to a point where I needed to change.

My mother never made peanut butter and honey; I never had it until a friend introduced me to it my junior year of college.  I admit they are very messy sandwiches, but they are tasty, particularly toasted.

Playing in the yard with neighbors was standard for us as kids, but we didn’t have a nearby park and we did have swings, sandbox, and eventually monkey bars in the back yard.  As I wrapped up the chapter I had not decided whether to complicate my life by introducing neighborhood kids, particularly as I was already somewhat using the same template–my own neighborhood–that I used when Lauren was describing her upbringing to the doctor.

The night I was going to start this chapter I cut a beef roast into thick steaks and broiled them, and then after I had eaten I burst an abscess and went into the hospital.  It was five days before I actually began the chapter, and while hospitalized I kept trying to write the three stories mentally but wasn’t getting farther than a few paragraphs on any of them other than Beam.

I debated how to integrate Lauren into the group, and realized repeatedly that her wagon was a complication that meant she was going to have to be in the rear.  It also occurred to me as I was writing this chapter that I don’t remember how the pack animals were managed, but I’m sure there were some.

It was at this point that I recognized I was going to have to construct the party so Lauren could try to learn their names.  I had already remembered some, and gotten some from Jim Denaxas, but I sent a message to Ed Jones, who ran that game, and he promised to think about it and reply, which put me kind of on hold.  He never came back with any recollections.  Eventually I put together quite a bit of the original, created a new name for one of the characters, and built the teams and squads with what I had but without having names for all of them.

A good part of this was plot exposition, through giving the history of the previous venture.

Nightstalker was the name of a character played by Dom Porrini, Ed Porrini’s younger brother, a winged folk whom Jim Denaxas remembered being a magic-user.

My wife played a cleric/magic-user who under Ed’s mystery options rules had completely lost her memory.  Unfortunately I could not remember her character name other than that I thought it began with A and was not a common word or name.  After debating long I decided to use a medicinal word and alter the spelling, making her Annseff.  I do not recall whether she was a human or a half-elf, but I’m hoping it won’t matter.

Ed had named Remoir the Dull Legacy.  We had come to an awkward plot moment where there were two new players but no obvious way to introduce their characters to the party, so Brad Ladlee had his character Lurt go out into the street and pick three people seemingly at random, two of them the new player characters and the third an unknown.  We had been toying with a joke martial arts style called Bo Ring, which I had detailed for use in play, and Ed decided that this character would be an adept of that style.  The style being my creation, I kept the character and changed the name to Rodan the Tedious Endowment.  I picked Rodan because I always suspected that Remoir was a warp of the artist Renoir, so I warped the name of the artist Rodin.

I also always suspected that the title “the dull legacy” was a dig at Ed Porrini’s “shining legacy” title, but have no proof of that.

I did not like changing the name of Laneth Lelach Theana, largely because it was the model on which I had built Derek’s sprite name, Theian Torenu Morach, and that of other sprites in his sprite world.  However, even though in Ed’s intention it was all one word, it was his invention, and I felt it necessary to alter it.  Since at this point only the first name was mentioned, I changed only that from Laneth to Anneth.

Numerous times while writing this book I remembered recognizing in the early chapters of Verse Three, Chapter One that dungeon crawls weren’t particularly easy to keep interesting.  I had a book in which dungeon crawls of a sort were going to be the primary action (with Tomiko adding some light to the darkness for the first half, but then getting into the dark with the others), and I had to keep looking for ways to keep them interesting.  Two days before I published this chapter I realized that I had made this chapter interesting by character interaction, which I would do many times through the book.

I needed to settle Tommy somewhere, and while I still had a lot of issues concerning how to integrate her into the world, making her the weekday babysitter for Tammy seemed the right first step.

I didn’t give names to the neighborhood kids even though I did expect to continue in this location partly because Tommy didn’t expect to do so at this point so learning the names would not have been important to her, and partly as I mentioned because I was basing this somewhat on the neighborhood of my childhood, which I used for Lauren’s description of her own childhood neighborhood.  I had not used the names of the real kids, and in fact reversed some of their genders, but I did not want this to be too like that.

I’ve put myself in an awkward position, since for both Beam and Takano I’m mostly writing about domestic tranquility.  Hence I’ve got Beam cooking and drinking while I try to move him forward.

It was as I was writing this chapter that I received word from Ed Jones that he did not want me using anything in the novel from his game world Valdron or created by him.  There was an initial misunderstanding concerning what I was writing, but I agreed to rebrand anything that was clearly his, including character and place names.

I had left this chapter hanging for a few days, feeling that it was too short but not knowing what else to do with it.  Finally I decided what I was going to do in the next Beam chapter (not a new idea, something I had intended but hadn’t figured out when) and let this one end where it was.