This is mark Joseph “young” blog entry #381, on the subject of World Complications.

This is the thirteenth mark Joseph “young” web log post covering this book, covering chapters 73 through 78.  It was suggested that more shorter posts were a better choice than fewer longer ones, so there will be posts every six chapters, that is, every other week, for this book.  Previous entries were: 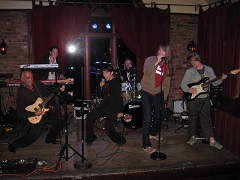 I was beginning to get boxed in with Lauren.  I had promised that she would not get back to the city alive, but at this point she could easily jump over all the dangers ahead.  I had, as it were, too many commitments, and too few options.

I was getting worried about Tommy’s story, because there wasn’t much else to do with it.  I kept prefiguring a fatal car accident, but it was too soon to put her in her final world.  The answer that struck me was that I needed another world, perhaps a stall world, perhaps something more serious, and then when everything else was ready I would bring her into the final setting.

This was all routine stuff, and I was trying to get through it quickly without making it more boring than it might be.  There was more boring stuff ahead.

I didn’t name the third leader, partly because I was tired of naming people, partly because doing so would push toward more detail I didn’t want.  That became a bit of a problem when I started writing the next book, and Lauren had to meet the group leaders, because he needed a name then and I had to be certain I hadn’t incidentally given him one somewhere along the way.

The darkness occurred to me belatedly.  I had even considered having the light spell be still effected, but that would create a problem for me that the party would have managed to get past all the dangers, and I would be stuck trying to find a way to verse out Lauren before they reached the surface.  However, I had already decided that there was some small amount of light near the entrance to the drow kingdom, because despite their superior dark vision there were some things that not even a drow could see without light.  That gave me a target point and space for more story.

I had discussed the situation with Kyler, who felt that if the actual assassins had fled the scene the nobles would not have been too particular about whom they executed, and there was no climate for negotiation at this time.  Further, he felt that Gojo and Sheegoka would quickly recognize this and agree to depart.

I really had no idea what to do with this world, other than to have Tommy struggle to survive it.  That, though, was as good a place as any to start.

When I was setting this behind-the-writings section for HTML publication it occurred to me that this snow-filled forest is very like a stall world that has been used in play, originally by Richard Lutz and once by me.  It has happened to Michael di Vars (a.k.a. Roland of the Sar) that he has versed in at the top of a snow-capped mountain more than once, and died trying to get to the bottom.  I used that once in a demo game, including having di Vars there to explain things to a new verser (player character) before they both fell to their deaths.  I was getting tired of the Tropical Island scenario.  This lacks the mountain and the consequent climbing hazard, but it is a survival against the cold scenario.

Honestly I was caught between trying to move this story forward and recognizing the complexities of what Beam was doing.  I needed the people to learn how to use the technology, but it had to be obvious that this wasn’t happening quickly.  I didn’t really like it much at all.