This is mark Joseph “young” blog entry #273, on the subject of Maintaining Fictional Character Records.

At this point I have written six novels and am watching the fifth go into publication in online serialized form.  As with the work of many other authors, the books themselves form a series, with characters continuing their stories from book to book.  One of the challenges of such a collection is maintaining character consistency, that is, making sure not only that the characters stay “in character”, but that they don’t change in the details, from hair color to high school to siblings to skills and equipment.  It’s easy as an author to forget something you decided three books before about a character, so it’s good to have a method for keeping track of it all.  You don’t want to find yourself saying that a character can’t do something he did before, or that he did something long ago you already said he didn’t do, or that he abruptly has or does not have some possession previously established otherwise.

This is my method.  I’m sure that it has some unique features, and I’m equally sure that other authors have different methods.  However, if you’re contemplating writing something that might have a sequel, you’ll want a method of your own, and mine might be helpful at least to get you on the right track. 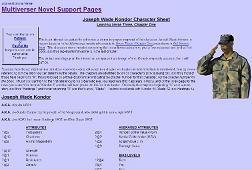 I think if I were more organized I would probably keep the character records up to date as I wrote, adding details to the records each time I used them in the story.  I don’t do that, mostly because while I’m writing I’m not thinking in that direction, but in the direction the story is taking me.  This has meant that in the editing process I’ve had to go back and change something that was contradictory because I forgot between chapter one and chapter twenty-one that I had made a particular statement about a character.  That’s alright–that’s really a large part of what story editing is about, catching the inconsistencies and making them consistent.  Thus I don’t start work on the character records until I’ve done at least one read-through edit, and then I try to do them as part of the editing process.  Thus I begin with document one, the near finished draft of the book.

Before I start, I make sure I have another set of documents, one for each character whom I believe is going to reappear in a later book.  I have been wrong more than once–that is, having introduced a support character in one book, I unexpectedly brought him (or her) back in a later one, and had to go back to the previous book to build a starting character sheet.  Because my stories are based on Multiverser, I use one of the formats I have used for character papers in game play, which gives me an organizational structure; and because these are word processing documents, it’s easy to edit them.  The particular format I use begins with the character’s full name followed by nicknames and aliases, then a section of attributes rating how strong, smart, agile, and so forth, the character is, and a physical description.  I then list all the skills the character is known to have.  The game system gives me a solid organizational structure, because I can list technological skills, body skills, and magic and psionic abilities each in its own sector and use the game’s “bias” system to keep them orderly and find what I’m seeking.  Below that is equipment, which is probably my weak point because I list it in the order it is first mentioned in the text, and thus if I’m seeking something I sometimes have trouble finding it particularly if the character has a lot of possessions.  At the end are notes that don’t fit anywhere else, such as details of character history, known character traits and beliefs, and similar items.

Going from the book to the character sheets is a two-step process.

The first step is that I read the book and consciously attempt to notice every mention of any skill, possession, or personal detail for each of the characters I’m following.  This has to include both positive and negative details–that is, negative in the sense of that which is established as not available, such as that Bob Slade more than once noted he was never a Boy Scout and Joe Kondor doesn’t have a watch.  For each such item, I open that character’s record sheet and go to the bottom, typing the chapter number and what the item is.  Since I’m recording the chapter numbers (and my books have a lot of short chapters) it’s easy for me to relocate the reference later if I’m not sure what my note means.  I do all the characters on one pass, and so once I’ve finished the read-through I have multiple character records with a lot of chronologically-organized notes at the bottom.

The second step is to work from those notes, by opening the character reference paper in more than one window, and making entries in the appropriate sections of the upper portion of the sheet; I usually but not always include the chapter references for more information.  The notes can include things like whether a weapon is loaded, if an object broke or was repaired, and sometimes that a particular object was given away.  I don’t delete the note entries, but instead italicize the ones already included; having them makes it easier to track some information using a search function.  I do the characters one at a time, focusing on each until it is completed before moving to the next.

Because Multiverser is a game and the novels are in some sense an extension of it, I have a third step:  I create web page versions of the character sheets to provide to the fans so they can use the characters in games.  I don’t make these as complete as I would were I actually using them in a game, but I update them for each book.  That requires creating a new HTML file for each character for each book, and then matching the information in the new HTML file to that in the word processing document–but since I can save the previous file as a new file and then edit the new one, this is mostly about finding the new details.  I do not include the end notes in the web page versions, but regard the word processing files as the “official” records which I reference at need, the HTML files as the public publications of them.  Also, sometimes in the process of creating the new sheet I find errors in a previous one–most commonly omitted items.  I fix these in the new sheet, but not in the previous one.

Those character papers are available online, which is really so that my readers who want to use the characters in play can see the details about them but in this case gives you the opportunity to look at the format.  The headers including the pictures in the HTML versions are not part of the word processing files, as they are not needed in those.  (The pictures are present primarily because they make sharing on social media more effective.)