This is mark Joseph “young” blog entry #86, on the subject of Novel Conflicts. 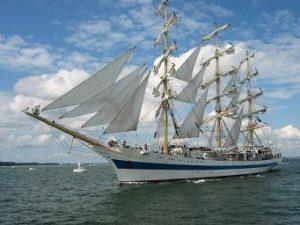 I skipped Lauren in part because she was ahead of Kondor in stories and I’d already determined that he would be out of the next book; and in part because I’d created a cliffhanger for him and had a story idea pressing on me at the moment which I wanted to pursue.

One of the problems I had with the first draft of the first book was that Kondor’s atheism seemed to start when he encountered Lauren’s Christianity; I did a lot of rewriting to strengthen it earlier.  In this book I did not expect to repeat any of those arguments (been there, done that), but needed to keep his identity as an atheist solid as part of his character.  The debate about whether mythical beasts like sea monsters were a challenge to that belief helped in that regard.

Saying that Lauren learned many magics and became a powerful sorceress gave me options to use spells and psionic abilities in the future that had not been established specifically.

I needed to keep her distant from the core of the Arthurian legend as a way of explaining why she doesn’t appear in any of the tales.  She did not need to be entirely gone, just distant enough that no one would wonder that she wasn’t mentioned.

When I mentioned Morgana, I did not realize that she would reappear later in an unanticipated role.

By the time I mentioned the oak forest, I knew what the acorn was.

The healing magic was something she had not done previously, and thus an example of what she was learning.

The idea of having Horta accuse Lauren was a step toward establishing the confrontation I needed to have him kill her; having him flee would give me a viable reason to move Lauren from Camelot to Wandborough.

I chose Sir Sagrimore because he is a known knight for whom there are no familiar stories.  I guessed that in doing this I reduced the possibility that anyone would say I was not representing the knight’s character correctly, as they might with Gawaine, Galahad, Lancelot, Tristram, and other famous knights for whom stories are extant.

It was during the readthrough of this section that I made a stone block out of the stone wall; it seemed to work better.

John Walker often says, “I’ll sleep when I’m dead.”  I’m not sure whether I ever heard it from anyone else, but it seemed to fit Derek’s situation.

I needed to make the trip take a long time through the swamp even though it could not be so far to the castle, because I needed Derek to be tired enough to fall asleep again.  I didn’t see a fight with a vampire as maintaining the mood of this story, although I wasn’t certain exactly how it would end next.

There was a stupid servant in the version of this played in the game, but he was not so deformed nor so stupid as this one I created.

“Morbius” is a nod to a Doctor Who episode in which some dying scientist has created a body in which he intends to put his brain.  It was the name of the madman, but from that also that of the animated body.

The conversation with the servant gives a lot of clues about the situation, although to some degree the world does not completely make sense.  I used his pauses as if to remember to suggest a number of ideas.  I have since run this world for players and had to expand on a number of aspects, but at this point this was the entirety of the world.

Lauren isn’t certain how to track Horta, and neither am I; but I’m also not certain what to do when they find him, so I’m exploring the situation while I look for answers.

It was established in the first book at some point that Lauren had always wanted to move to a more rural location and keep a horse.  It suggests that she is like the many girls who spend time with horses when young.

Lauren’s estimates of how long in the future various events will occur is very inexact; she does not really know what year it is now, only that it is anno domini.

There was a part of me that wished I had thought of this idea of trading food for emeralds sooner; but I resisted the urge to back-write it into the story because it didn’t seem realistic in my mind for Kondor to have thought of it sooner.  I thus committed myself to bringing him around the circuit again, and to creating interesting adventures to fill that time.

Oddly, although I had decided that the mysterious host was a vampire, I had not determined how Derek was going to die–that is, the actual death moment escaped me.  Even when he fell asleep, I expected he would awaken and actually face the monster.  But having him not awaken was believable, and saved me the disadvantages of another fight scene.

The introduction of the summer camp world was from the outset intended to be a slasher movie story; but none of the details had yet been determined.

I created the comfort bubble with a view to using it in the climactic scenes.  Always there were things I did to prepare for the climax and things that I did to make the current scene work which I later found a way to use.  The comfort bubble was to save their lives and allow the denouement of the story.

When I wrote about Raal’s uncanny ability to spot the undead, I didn’t realize myself that it would lead to his ability to smell them.  But it made perfect sense for a werewolf to be able to smell decay in an undead body from quite a distance, and I needed a way for Lauren to do the same, so this developed from it.

Creating fight sequences is in some ways the most difficult aspect of the writing.  Each has to be distinct, using maneuvers and techniques in ways that don’t sound like she did this again; yet they must also sound consistent with all that has been done before.  It must seem like the same person involved in the battle doing the sort of things he or she usually does, but it must not seem like the same battle over again.  Thus I find myself mixing established bits with variations, and looking for reasons why that which was done successfully last time doesn’t get done exactly the same way this time.

The sextant is one of those things that I expect will eventually be useful; I just don’t know when.

I immediately recognized the tension involved in having a crate of uncut gems and a distant place at which to have them done.  It would become a nagging weight on Kondor, for a little while.

I’ve actually never seen a slasher film.  I was not at all certain as I started how it should play through.  I needed characters and a relaxed atmosphere, and so I set about to create it.

A lot of my camp notes recall my days at Lebanon, a Baptist campground in New Jersey; but very little is even similar.  The bell was near the mess hall, there were separate boating and swimming lakes (but no docks on the boating lake that I recall), plenty of woods and trails, a barn where the craft department was, and two-way radios used to keep people in touch with each other.  Oh, and there was a chapel, and to a degree the major landmarks in my mind are roughly in the same relationship on the map as they were there–except that the cabins are in exactly the opposite direction, beyond the barn rather than beyond the mess hall.

Getting the tire fixed was a good excuse to keep Derek here.  I don’t know that I ever used the bicycle as a means of transportation in this book, and although I thought I might I had no specific case in mind.

Everyone in the game develops something we call a “philosophy of the verse”; eventually they start putting together an idea of what is happening and why.  Derek’s, so far, is that he’s comatose and dreaming.  This notion that he is using his expectations to turn the dreams to nightmares is a good step in that development, and it gives him reason to try to put the horror thoughts to one side for now.

Apart from the biblical reference, Shiloh happens to be the name of the next town over, and of a church there which runs a summer camp not far from here, although the camp is not called “Shiloh”.

David isn’t anyone I remember; he’s more a type of person who seems right at summer camp, a conglomerate of those modest leader types.  My cousin Ron probably contributed significantly here.

Mahwah is the town next to where my parents live.  I don’t know whether I’d mentioned it as his home before, but it seemed a good place for his origin.  Newark also is a city in New Jersey, but it happens to be one in Delaware as well, and I recall there being such cities elsewhere.