This is mark Joseph “young” blog entry #85, on the subject of Time Travel Coming on Television

I got several notices from readers alerting me to something new in time travel coming to a small screen near you, and I paid little attention to them, I’m afraid.  For one thing, I don’t do analyses of time travel media other than movies, for reasons detailed elsewhere.  For another, at present I don’t have access to “regular” or even “cable” television–I watch DVDs, Netflix via an RCA Streaming device, and sometimes manage to borrow the equipment to Chromecast something from my office computer to the living room television.  For another–well, television series about time travel rarely work.  As a boy I enjoyed Time Tunnel, and I have the series on DVD, but for anyone who has any coherent theory of time it is a temporal nightmare.  I liked Se7en Days, and even used it as the basis for an example of a way in which the past can be safely altered.  However, ever since Star Trek:  Voyager delivered three temporally disastrous episodes in its first season, I have been extremely wary of any time travel television series, and for some combinations of these three reasons I never watched The Sarah Conner Chronicles or Continuum.

I’m still interested in time travel, though, and it seems that I got all these notifications of upcoming time travel television because there’s more than one show on the horizon. 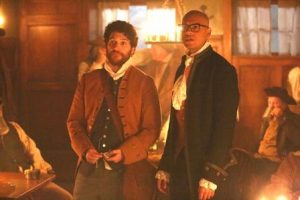 Sometime in 2016 FOX will be bringing a made-for-TV comedy movie under the title Making History (photo above).  The trailer looks highly entertaining.  I am considerably more forgiving of absurd temporal disasters in comedies because they’re supposed to be funny, and well done absurd can be funny.  In this iteration one of our primary characters, pretty much a failure in the present, has hopped back to the past and fallen in love with Paul Revere’s daughter.  Revere expected his daughter to marry the man of his choosing, and is so upset about this he fails to make his famed ride to warn of the approach of the British, and the Colonies are overrun.  Our bumbling hero returns to the present and persuades his history professor to come back with him to fix the problem, but the fact that the professor is black adds more complications to the situation.

It is, of course, absurd on its face:  once the American Revolution has been undone, the time traveler cannot return to the world he left behind, because it has been erased.  Yet it looks like a good foundation for a very funny story, and if after it airs I can find it somewhere I can watch, I’ll probably give you a more detailed account of just how disastrous it is.

Meanwhile, NBC is also getting into the act with a drama called Timeless, which is announced as a 2016 television series.  Here the story is darker:  some group has stolen a time machine and traveled to the past to alter American history in ways that are apparently significant to someone.  In the trailer, they are attempting to prevent the Hindenburg disaster.  Our time-traveling heroes are sent back to protect history, to prevent the changes.

We have previously noted the major problems with efforts to prevent changes to the past, particularly in our analysis of TimeCop as well as repeatedly in the Terminator series.  This can only end in temporal disaster–and since it’s a television series we can probably expect repeated disasters week after week.  On the bright side, it looks like a well-made well-acted action-packed adventure.  On the dark side, it appears to mix theories of time rather randomly–the very fact that a team has been sent to the past to prevent it from changing says it can’t be fixed time, but one of the time travelers reports having a copy of a document that another member of the team has not yet written.

To confuse matters, IMDb reports not one but two current movies under the same title, one released this year and another slated for next year.  Those might see analysis eventually, if I can get copies.

Also in production for anticipated release next year on ABC is a series entitled Time After Time based perhaps loosely on the movie of that name or the book on which that movie was based.  This is the story in which H. G. Wells has invented a time machine and somehow Jack the Ripper has managed to use it to escape into time, with Wells in pursuit.  Information is at this point quite sketchy.  The movie was good, but had a lot of temporal difficulties which a series promises to compound.  Still, it has some promise, depending on how it plays.

So time travel fans will have plenty to entertain in the months ahead.

As always, if you have questions about time travel stories you have seen, write to me (you can use the e-mail comments link below), assume I have not seen whatever it is you saw and give me details, and I’ll do my best to answer based on what you describe.  Meanwhile, if you want me to see these, you’ll have to use the Patreon or PayPal.me links to increase the support of this site to a level that can pay for such luxuries, or arrange to mail me DVD copies of them.  Thank you.