This is mark Joseph “young” blog entry #87, on the subject of Spanish Ice Cream.

My sister has what I call a facility for languages.  She was, for a time, a United Nations translator.  Before she finished high school, she sometimes dreamt in French.  When she worked in Taiwan, sometimes people speaking with her on the phone would use a word she did not know, and when she explained in Chinese that her vocabulary was limited because she was an American, they would argue with her that she could not be an American because she spoke Chinese too well.  Her Taiwanese-born husband told us that we should ask her, not him, about Chinese pronunciation, because he had what he called the equivalent of a “Brooklyn accent” and her pronunciation was much better.  She also knows smatterings of Italian and I don’t know what else.

I do not have that.  Our parents spoke French at the dinner table not because they were French (my father was Nth generation Southern) but because they wanted to be able to discuss things in front of the four children without our understanding them.  I took two years of French, but when I get mail in French I reply Je parle un tres petit peux de français, and ask if they can send again in English.  I have written several articles which have been translated into French, and I can’t read them.  I remember fewer than a dozen words of Romanian from my three-week concert tour there decades ago (thank-you, you’re welcome, what does this cost), but I never knew more than a score and don’t know the syntax or grammar at all despite being rather good at the linguistic side of languages.  I struggle with Koine Greek to teach New Testament, have picked up a bit of church, law, medical, and logic Latin, know probably less Hebrew than Romanian (and to quote a character in my wife’s favorite movie, “Who would ever bother with Romanian?”).  Most of the Spanish I know I learned from not watching Sesame Street when the kids were watching it–numbers through ten, open and closed–plus a few words that I’ve picked up in funny stories.  I use to tell people that I couldn’t speak enough Spanish to say “I don’t speak Spanish” in Spanish.

In short, I understand that some people have trouble learning a new language.  I certainly do.  Fortuitously I speak what is one of the most commonly spoken languages in the world, and the language of my homeland, quite fluently.

In Milwaukee, Wisconsin, Leon’s Frozen Custard, in the south side of the city since 1942, has gotten in serious public relations trouble for what on the surface seems a very foolish reason:  the owner does not permit his employees to speak to customers in any language other than English.  Hispanics and liberals called for a boycott, but current owner Ron Schneider has stuck to his guns.  Not all of his employees are bilingual, and he does not want customers to expect bilingual service.  That’s the simple response; there are a lot of other reasons why an employer might have such a policy. 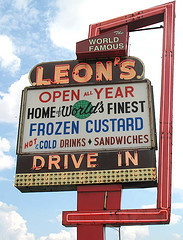 The protestors are certainly correct that offering multilingual service is a competitive advantage.  I joke with the guy who is probably the best person for computers in the area, because he is co-owner of a small but busy shop that does mostly cellular phones plus computer equipment, and he genuinely is the only guy in the place who is not fluently bilingual (English and Spanish).  They hire no one out front who cannot deal with both the English-speaking customers who come from outside the small city because they know he’s the best and the local Latino population who come because they can ask questions and get answers without a language barrier.  It is an advantage for the store; it translates into a marketable skill for the potential employee.  I could not get a job there, even if I learned a lot more about computers and cell phones than I care to know.  Leon’s could attract more business by serving Spanish-speaking customers with Spanish-speaking employees.  That is a choice he makes.  On the other hand, he’s a landmark, and people in the suburbs drive into the city just to get his ice cream and sandwiches, and apparently hire him to cater weddings and parties.  More business is usually a good thing, but one weighs the costs against the gain in such questions.

The protestors are also right that they don’t have to buy ice cream there.  That’s a cost against benefit analysis, too, as their protest by boycott means they are sacrificing what some claim is the best food of that category in that area, accepting lower quality in the name of principle.  By the same token, though, doesn’t Leon’s have the right to establish the terms on which they will serve customers?  If they have to allow people to order in Spanish, why not Farsi?  Cantonese?  Japanese?  Russian?  Romanian?

If I were invited to sing in a Spanish-speaking church, I am not certain how I would handle that.  On the one hand, I am of the opinion that the lyrics to songs matter, and when I sing I want you to hear and understand the words.  On the other hand, I don’t think it would enhance the performance to have a translator standing next to me trying to repeat everything I sing in another language–even if he doesn’t disrupt my focus he’s going to be talking over the music.  I wouldn’t trust myself to try to sing a translated version of my lyrics–I might wind up calling myself a jelly donut, which does not put me in bad company but is still embarrassing.  You cannot expect everyone to speak every language, or do business in every language.  To do so is to demand that those who cannot speak multiple languages not be permitted to speak at all.

In this case, though, the argument is made that Leon’s already employs some bi-lingual servers; the rule is that those employees who could talk with customers in Spanish are not permitted to do so.  What possible reason could there be for that?

There are quite a few possible reasons, actually.  We’ll begin with the one advanced by Leon’s’ owner, that he does not want customers to expect to be able to order in Spanish.  Not all of his servers can understand an order in Spanish, and if someone comes to the window and no one is working who can take a Spanish order, that customer has to be chased away; and if that customer does not understand enough English to understand that they cannot help him, that slows the line.  On those days, the line is further slowed by the fact that there will be numerous customers in it who cannot be helped because the servers cannot understand what they are saying, the longer line moves more slowly with fewer sales, and people driving by are less likely to stop to queue onto a long line, which is more lost business.  If Leon’s cannot serve you in English, you become a problem for the business, because they can’t serve you every time you come, and you’re scaring away real business by taking space in the line.

Of course, some days some of the servers can speak Spanish.  Why not just let them do so on those days?  Apart fromn the fact already noted, it is clear that not all of the servers speak Spanish.  If some of the customers expect to do business in Spanish, that fouls the queue when they reach the window and have to wait for the bilingual server to be available to help them while the English-speaking server is now trying to find someone else in the line who wants to order in English without giving anyone the feeling that the service is unfair.  Service is now inefficient again.

There is also the problem of management.  I don’t know whether owner Schneider speaks Spanish, but he probably does not make it a requirement for his management staff to do so.  Even the best of employer-employee relationships are a bit adversarial; your employer might be a friend, but he is not a buddy, and he is watching to ensure that you do the job right.  Customer service is a vital part of any business, and particularly in the food industry.  If I’m running the store, I want to be able to understand what my employees are saying to my customers, and it is important to do so for a lot of reasons–easily illustrated by giving a few ideas of things I do not want to hear my employees saying to my customers.

You get the point–or do you?  Remember, the store is responsible for what its employees say to its customers.  To exercise that responsibility, the managers have to be able to understand what the employees are saying.  In order both to meet the demands of the protestors and protect the interests of the business, Leon’s would have to fire any employees, and particularly any managers, who are not fluently bilingual–a mistake for any business that has been running so long, because they undoubtedly have some excellent and trusted people working there who would be out of work, and would create a lot of disgruntled employees and former employees.

And what happens when the immigrant Middle Eastern population insists that they should be able to order in Farsi or Arabic?

I saw the list a few years ago; I believe that official government publications in these United States come in over a hundred languages.  Every court of law in New Jersey has a Spanish interpreter on staff, and in most jurisdictions they earn their money translating for defendants who do not adequately understand English.

In the Roman Empire, every province had its own language, and people spoke that language with each other locally, much like Italian neighborhoods of the last century and Hispanic neighborhoods today, but on a larger scale.  Yet business was usually conducted in the international language Greek, and legal proceedings generally in the official language Latin, and almost everyone was tri-lingual.  There’s nothing wrong with being multilingual, and there’s nothing wrong with offering multilingual customer service to attract customers who do not speak English.  However, when we attempt to force people who do not speak a foreign language to use it in their business transactions, we are being unfair to someone.  The customer can always find a merchant eager to accommodate his language requirements to make a sale.  The businessman can only work in the languages he knows.  It is therefore the choice of the business what languages will be spoken in their business transactions, and if the customer doesn’t like it he can bring an interpreter or shop somewhere else.