This is mark Joseph “young” blog entry #44, on the subject of The Feeling of Victory.

Moments ago I finished a game of computer pinball, and it was such an exciting finish–on the final ball I finished the extra point task list, crossed the two million mark, and lost the ball, all within a second, and I couldn’t help going, yes.

Don’t get me wrong.  Two million is a paltry score, even by my standards. I have to break six or seven million just to get on my own leader board, and I think that my record score is up somewhere above fourteen.  This wasn’t a particularly well-played game overall.  It was just– 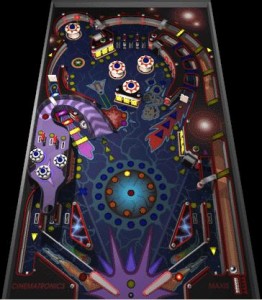 It illustrates something that every game designer and every role playing game referee needs to grasp.  It is something inherent in Multiverser, something that I tried to capture in the novels.  Some call it the “payoff”.  It’s the feeling, perhaps the “rush”, you get when you do something special.

Note that you don’t have to win.  You don’t even have to break even.  You don’t have to have reached some pre-defined goal.  At no point did I think that I wanted to reach two million–on throwaway games of pinball, I figure I did fine if I passed the million mark, and I’d done that.  Nor did I give much thought to whether I was going to “complete the mission” by hitting all the intended targets.  It was this juxtaposition, the unexpected success on both of those in-game milestones at the moment of defeat.

After all, let’s face it, you never “win” pinball.  It’s not like Solitaire, where sometimes you win and sometimes you lose and if you know enough you can improve your odds.  With pinball, you keep playing, and you keep winning, until suddenly you lose.  You can count it a win if your particularly high losing score is high enough to put you on the leader board.  Yet this unwinnable game has an appeal of its own, an appeal that comes from the small victories along the way, and particularly from the unexpected ones, the ones that come in under the wire, the ones that surprise.  It’s fine for me to lose, as long as at some point I felt like I won–even if it’s the same moment.

It’s fine to run or design a game in which people lose.  In Multiverser, player characters get killed all the time.  Ron Edwards once wrote that the game had some of the best answers to the problem of character death, because we use it to advance the plot into the next adventure.  You lost the round; get ready for the next round, because you get to keep playing, you’re just on a different board.  The game you lost isn’t lost if you won something along the way, and the sting of defeat is considerably mitigated by the thrill of a victory gained at that same moment.  People love their victories, but they also love their glorious defeats.  Icarus may have crashed and burned, but for a moment there, he was flying.