This is mark Joseph “young” blog entry #0001, on the subject of Probabilities and Solitaire. 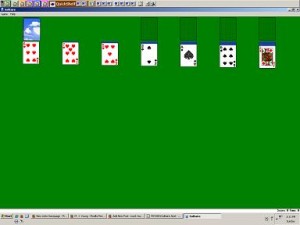 I expect that this blog is going to tackle a lot of issues–I am already working on another on marriage and another on copyright and another on why I left TheExaminer–and judging from past response I will get a lot more hate mail than thank you notes (although I appreciate both). However, I thought it best to begin with something light and inconsequential, something that has been nagging at me periodically for a long time that more than anything else shows how foolish we “superintelligent” people can be, as we get mentally stuck on little things that bother us.

I had been thinking about part of this article for a number of years, and kept saying it would be a silly waste of time. Then probably a year or more ago I was watching the TV series Scorpion. As one episode opens, math savant Sylvester has been charged with entertaining Paige until the rest of the team returns from somewhere, and he hands her a deck of cards, recommends she play Solitaire for a while, and then–this was the part that bothered me–tells her the odds of winning. The more I think about it, the more I think he can’t know that.

I have played Solitaire since before high school, and I won’t argue as to whether he did the math right; my argument is that there are too many variables, things he cannot know. Never mind that Hoyle has an entire chapter on solitaire card games, even if we assume agreement that it is the standard seven-pile variant in which there are increasingly from one to seven cards in each pile with the top card faced, there are still too many variants. Even in the popular MicroSoft® computer version you can switch between advancing the pile three cards at a time (the traditional version) or each card individually, and with the latter your odds of winning rise significantly (because with the three-at-a-time rules there are often cards you cannot put in play that would move the game forward). Too, I was taught that with the three-card variant when you got to the end of the pile you went back to the top, but with the one card variant you got only one pass through the deck–which significantly lowers your odds. I have also known players who believe that after each pass they are permitted to shuffle the deck before beginning the next pass, or that if as they reach the end they have only one or two cards (not three) in the pile these go on top of the others so that what was the first card becomes the second or third (both rules making it much easier to free cards from the deck). Before you can calculate the odds, you have to know the rules.

So maybe Sylvester was thinking of “standard” rules–three cards at a time, repeated passes, no rollover or shuffle–and maybe on that basis you might calculate the odds. However, there is still the matter of strategy, and some people enforce rules that interfere with strategy.

I know about this because when I played Solitaire for years as a youth (what, you thought I was a popular kid always out with friends?) I played with real playing cards. Whenever I lost, I faced all the cards to see why I lost–I learned that you could be stopped if a card on top of a pile was sitting on the card you had to have to move it, and exactly what that meant, and how sometimes to avoid it. I think it a shame that the computer version does not let you do this, look at cards in the piles when you lose. It was a significant part of my education in game probabilities. In the game, you can make choices, and the way you choose impacts your ability to win.

What you have to understand is that winning Solitaire is achieved by freeing all the trapped cards. As the game begins, twenty-one cards are trapped on the board–six under the right-hand pile, five to its left, down to one in the second pile from the left end. In order to free these cards you must legally move the cards above them. There are also cards trapped in the deck from which cards are drawn. In traditional rules games the hardest of these to reach is the top card, as you must move both the second and the third to reach it; note that you can reach the fourth card in any of several ways, as it can be reached by moving the sixth and fifth, or by removing the third and waiting for the second pass, or by removing the third and second then on the second pass removing what was the original fifth and is now the third. Because of this, cards in the deck are the easier ones to free, and progressively more so the further down the deck they are. (There are initially twenty-four cards in the deck, and on the first pass eight will be accessible if none are removed.)

So how do you improve your odds of winning?

Second, always target moves that release the maximum number of cards. At the beginning of the game, there are six cards blocked by the card on top of the right-hand pile. That is at that moment the most important card to move. Once it has been moved, there are five still blocked–the same as the pile adjacent to it on the left–and so they become the most important cards to move. Throughout the game this changes, and when you have a choice of moves you want to be aware of what move will free the largest number of cards. It is almost always the case that moving the top card from the piles is a better move than moving one from the deck, by this measure. The computer version is your friend in this regard, because at the top of each pile the edges of the cards below appear, permitting you to count how many are still in each pile. Absent that, you probably have to remember.

As to the deck, keep track of how many cards remain in it. If the number is evenly divisible by three, you are going to see the same cards on the next pass. This is the most difficult bit strategically, as unless you have the kind of memory that allows you to keep track of the order of all the cards in the deck (and I do not) you are not going to know what moves are still possible from the remaining cards in the deck. However, on the first pass through the deck you need either to remove a number of cards from the deck, preferably nearer the top, that is not divisible by three, or you are going to have to change the board sufficiently that cards near the top are going to come into play in the next pass. Sometimes you will pass on a possible move because it will worsen your situation rather than improving it. It is better to play a card that will shift the deck on the next pass than to play a card that will restore it to the same sequence.

Another factor in the probabilities is that there are more ways to move a low card than a high one. If you are trying to decide whether to open a space for a king by moving the three of hearts or the eight of diamonds, it is probably better to put the three of hearts on the black four because once the ace-two of hearts are played it will be possible to remove the three. If you put the eight of diamonds on the nine of clubs, it is going to sit there until you get seven other cards played to the ace pile, or you have the unlikely opportunity to move it to the nine of spades (which again is something some players do not allow: splitting a pile to move part of it).

It is also advisable that you not let your ace piles become too disparate. If your diamonds pile gets up around seven or eight and you still don’t have your black aces, it is going to be much harder to find places for all those black cards that have no ace piles and no diamonds on which to be played. This is again a balancing issue: it is more important to get the cards in the piles into play than to worry about the disparity on the ace piles, but that ace pile disparity can prevent you from doing so if it goes wrong. You can (in most games, again some have a rule against this) play cards back from the ace piles to the main piles, but only if there are places for them, and that, too, can be blocked.

One last note: kings are ultimately the easiest cards to move after aces. (It is never a bad move to start an ace pile, unless moving the ace will lock your draw deck.) A queen can be moved to one of three places–the two black kings and the proper suit ace pile. A king can go to the ace pile and to any of the seven board piles once they are open. That makes moving kings a lower priority than moving any other card, and the other cards should be moved first if you have both moves available, unless it is clear that the king is blocking a significant number of other cards and the other move is not.

One thought on “#1: Probabilities and Solitaire”