This is mark Joseph “young” blog entry #40, on the subject of Multiverser Cover Value.

In a thread on Facebook on a completely different issue (an article I encountered on an effective non-lethal weapon) posters made some comments about the complexity of the Multiverser game system.  I don’t happen to think it that complex, really (to create an Original Advanced Dungeons & Dragons™ character without limiting in advance what the player might want to be, the referee needs to have access to twelve of the thirteen hard-cover volumes), but they did tackle two of the more complicated areas:  the spell system and the way to calculate cover value for armor.  I promised to provide answers, and since I no longer have the Gaming Outpost forum for such things, the answers are going to land here.  We previously addressed the issue of Multiverser magic; this entry will deal with the cover value problem. 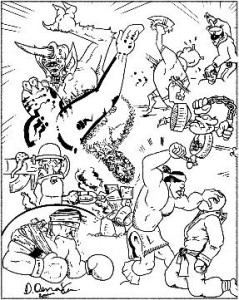 This part of it was raised by one of the most experienced Multiverser referees out there, my own son Kyler:

While you’re talking about complicated math in multiverser, I’m surprised no one has brought up Cover. That was one of the first things I changed when I was trying to streamline the system.

The math for Cover can get ridiculously complicated when you’re wearing layers of armor. “Add this, divide that. Take into account material density.” I abandoned it in favor of a system that focused more on where you were hit and ascribed a damage value to each piece of armor.

I’m not saying that the Multiverser system’s way of dealing with it is bad. I’m just saying that it’s needlessly complex, basically no matter what we’re trying to do.

Well, in my defense, the rule book does say that calculating cover is a complicated bit of math–but at the same time, that you don’t have to do it generally, as once for any piece of armor is sufficient.  Reading some of the other comments on the thread, I’ll note that if for Multiverser purposes you’ve calculated the “cover value” of five different pieces of armor, and you wear them all, your cover value is simply the sum of all the pieces you’re wearing, even if they cover the same body parts.  So the math is only difficult when a particular piece of armor is created or acquired, and after that the only question is whether you’re wearing the same pieces or left something off.

So, what is the complication?

How well armor protects is based on two factors, one of which is also based on two factors.  The one factor is how much of the body the armor covers.  It is kind of the joke that people wear bullet proof vests but are easily killed by a shot to the head.  That’s why combat and riot gear includes helmets.  The system would be complicated indeed if we required the referee to work out how much protection was afforded to each part of the body, but we allow a sort of fiction here–if you’re wearing a bullet proof vest, you are that much harder to hit, and the “cover value” takes into account that blows against your torso are less likely to penetrate, even though your head is still vulnerable.  In theory, someone can aim for an unprotected head, but they’d take a size penalty on the shot.

The second factor is how difficult it is to penetrate.  We know from history that iron armor protects better than bronze armor, because iron weapons are more likely to penetrate bronze armor but not iron armor.  It thus follows that a suit of white dwarf alloy (if such a thing could be obtained and worn) would protect better than a suit of aluminum.  We cover this factor with a density number–nothing too scientific, just the application of a game concept of “density” extended to cover materials that have not yet been created.  We also allow the issue of thickness, when it comes to armor–if you make your armor twice as thick, it’s more difficult to penetrate–but that particular factor is usually ignored because thicker armor of that sort is overly restrictive:  armor that is twice as heavy is only twenty-five percent more protective.

So the system really comes down to these two factors:

It’s not usually difficult.  For example, let’s suppose someone gets a full suit of jointed full plate armor.  The book suggests that such a suit covers ninety-five percent of the body–there are some slots for vision and air in the front of the visor, and a few small gaps where the metal comes together most of which open and close as the body moves.  It would be made of a relatively hard metal, but that could be a softer one like bronze or a harder one like steel.  Thus there’s a range of densities for hard metals, from 2@6 to 4@8.  From there it’s simple to convert the values to “decimalized” numbers and multiply.  If we’re looking at 95% coverage at 2@6 density, that comes to 26 x 0.95=24.7, which we round to 25, a 25 percentage point penalty on incoming attacks.  If we have heavier denser metal, say a 4@8, that’s 48 x 0.95=45.6, again rounded to 46.

It looks complicated probably probably for two reasons.  One is because of that table in the book that looks like this (you don’t have to read this table, it’s just here so you can see it): 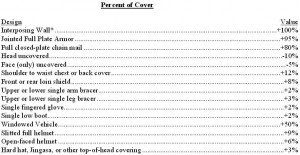 That makes it look complicated–add this, subtract that, put it all together to get a number–but ultimately, all it’s really saying is, figure out how completely the wearer is covered.  It tries to take into account things that should be considered–chain doesn’t really cover your entire body because it has little holes in it, and we’ve all read stories about the arrow or knife that went through the holes in the chain armor.  Ultimately, though, all the referee really needs to do is decide what percentage of the body is covered–or conversely not covered–to get his basic “percent covered”.  That’s all that that table is for.

The second complication arises, though, when players attempt to “game the system”.  They’ll usually try to make armor thicker to get more protection out of it–and sure, a phone book is harder to penetrate than a manila envelope, so thickness does matter.  It does not matter if the design uses layers–that is, if you’re wearing a chain shirt under solid breast and backplates, you get the full value of both.  It’s only complicated if you make the material thicker, such as making the breastplate half an inch thick instead of a (standard) quarter inch.  That requires a bit of math–but the thickness of the armor is not going to change, and wearing multiple layers of armor is simple addition, so you only have to do the complicated bit once.

After all, how many times does someone get a new suit of armor?  A few minutes to work out how effective it is should not be that much of a problem.

The game also has rules for ablative armor–armor which protects by absorbing damage–but these rules in essence say that unless the ablative armor is also stated to provide cover value, it does not provide cover value and so isn’t part of this calculation at all.  There can also be complications if someone is hiding behind a wall and someone else is destroying the wall, but that’s an attack on cover or structures, not at all about armor, so it’s not part of the usual “cover value” issue.

Or did I miss something?