This is mark Joseph “young” blog entry #31, on the subject of A Genisys Multiverse.

A Temporal Anomalies reader using the handle “Sanddragon939” at the Internet Movie Database (IMDb) has there posted a response to the recent Terminator Genisys analysis.  You can read it there; I am responding to it here, partly because IMDB periodically deletes old posts (I do not know how old) and partly because I am aware that one letter represents–well, a lot of people (in radio, we said a hundred) who agree but did not write, and they are more likely to find my response here than there.

First, let me say thank you for reading, and for your comments, particularly the positive ones.  I would not wish to appear unappreciative, since I do appreciate your comments.  Most of Sand Dragon’s comments were positive, agreeing with or at least commending points made in the article, and that’s actually unusual–people usually write to criticize more than to critique, and it always encourages me to read that something I wrote benefited someone.

With that said, there are apparently some points of disagreement, which actually all connect to each other, so let’s see if we can connect them and make sense of them. 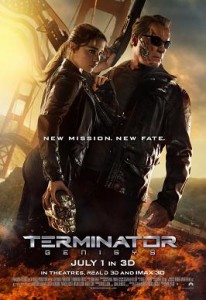 They begin with his point #1, where he says,

But Genisys appears to be a ‘reboot’ of sorts, which acknowledges only the continuity of the first film (while using elements from the second). The world we are presented with at the start of Genisys appears to be a 2029 extrapolated from the events of T1 in 1984 and T1 alone…with Judgement Day having occurred in 1997….what we see in the film clearly appears to be the future of the original film which has been disrupted by the T-5000.

I certainly agree, with the caveat that the T-5000 has to have originated somewhere, and it certainly is not original to that 2029 arising solely from the events of the first film.  Given its abilities, it evidently post-dates the creation of the T-X, which in turn post-dates the creation of the T-1000, and if Skynet had a T-1000 in 2029 it would not have sent a T-800 to do what a T-1000 could do more reliably.  It has had time to anticipate this moment, and to prepare for it.

That means that the future has to advance without the intervention of the T-5000 before the T-5000 can arrive to change things.  We thus have every reason to believe that the events of the previous films must have happened, even if the arrival of the T-5000 then causes them to “unhappen”.

Also, it must be noted that at some point someone sent Pops back to protect Sarah and someone sent a T-1000 back to kill her, and there is a T-1000 trying to kill Kyle Reese, all of which make no sense once Skynet compromises John Conner–Skynet needs him now, so it needs Sarah and Kyle alive.  The alternative is that the roles are reversed, the T-1000(s) trying to kill Kyle and Sarah come from the resistance and Pops was sent by Skynet–which theory falls apart when Pops opposes T-John.  Thus there must be a period after 2029 in which John is still a problem to Skynet and a benefit to the resistance.

Sand Dragon has an answer to that, but it is in point #6, where he begins,

Ultimately though, I feel that this film really doesn’t work under anything remotely resembling your particular ‘replacement theory’ of time….

–a point with which I am in agreement.  It also does not work under fixed time, and I’m inclined to say that it does not work under standard parallel or divergent dimension theories.  (Anyone who is lost is referred to the theory section of the site, and particularly to Theory 102, which covers much of this and links to related articles.)  The fundamental evidence for that conclusion is that under those types of multiple dimension theories anyone or anything sent to “the past” winds up in a different universe, and those who did the sending logically conclude that time travel does not work so they do not attempt it again.  A significant point in our article is that the film does things which don’t work under any theory of time.  However, here Sand Dragon disagrees:

…it best works under some variant of the divergent timeline/Multiverse model (indeed, personally, I feel the Terminator films have always worked on such a model).

Here we are speaking of something like Dr. Manhattan’s multiverse (from the film The Watchmen, discussed in some detail there).

Sand Dragon gives three points in support of this:

The multiverse model in question is one that is dear to my heart–as author of Multiverser:  The Game, I relied very much on that sort of Sliders/sideways time concept I first saw in a John Pertwee Doctor Who episode decades ago:  the notion that any possible (or indeed, any conceivable) universe must exist, because random differences between universes would create divergences.  Since I joined the Multiverser creative process in 1992 and published it in 1997, I’ve had over two decades and some serious motivation to consider the idea.  I find it severely inadequate, for reasons already addressed in the theory pages.  However, it is specifically inadequate in the present case, because it requires the existence of a universe predicated on a sequence of events which appear themselves to be impossible.

The critical event is that just before his thirteenth birthday, when something called Genisys was about to be activated, Kyle Reese was told by someone, “Remember, Genisys is Skynet.  When Genisys comes online judgment day begins.  You can kill Skynet before it’s born.”  At issue for us is what has to have happened for that to follow.

It is certainly possible that some sort of cloud-based operating system named Genisys could come online in 2017; Google might be working on something like that even now as it unseats MicroSoft from the title of Evil Cyber Empire.  However, in order for it to become Skynet in 2017, it has to have been tweaked by the emmissary sent from the future–who is identified as John Conner, whom we have distinguished as “T-John” because he has been converted into a type of terminator.  That, though, requires that John Conner was born, and he was born in 1984 as son of Sarah Conner and Kyle Reese.  Kyle will only be sent to the past if Skynet sends a terminator to kill Sarah, and if that happens we have the 1997 launch.  We cannot have a universe in which T-John travels to 2014 that did not include his birth in 1984 and the earlier launches.

The alternative here is that Genisys would become Skynet eventually–not in 2017, but perhaps by 2020, in the same way that we were told it took most of a month for the 1997 version of Skynet to become sentient and launch its attacks but the 2004 version did it in minutes.  Young Kyle then comes from a world in which that happened at some point–but then, who told him it was going to happen?  We might guess that at some future moment someone–perhaps even his older self–comes from the future to deliver that message, but where is that person in the new timeline?  Perhaps the point is that having gone to the past to warn his younger self, this Kyle unmade his older self, and had to be replaced by the Kyle from the other dimension–but we’ve got several consistency problems happening here.  Why should that future Kyle land in his own past, but our Kyle land in someone else’s past?  If the original messenger came from a different future, why wouldn’t he still arrive from that future?

And behind it all is still the problem of how the message given to that Kyle in that universe wound up in the mind of our Kyle in a different universe.

Ultimately, the problem is a predestination paradox.  Multiverse theory believers think that their notion of “every possible universe exists” makes them immune to this, but it only makes the problem more complicated:  in order for any version of Kyle in any universe to have been told by any version of Kyle from any universe that Genisys is Skynet, he must have remembered that he was so told, and thus he will only be told if he was told, and whatever only happens if it happens does not happen.  It does not actually matter that the Kyle who tells is in one universe and the Kyle who is told is in another:  before Kyle in our universe can tell the Kyle in some other universe that Genisys is Skynet, he must receive that memory from the Kyle he is going to tell, and that means he must already have told him before–sequentially–he knew, which he clearly cannot have done.

So I think even under this multiverse theory, Terminator Genisys fails.

As they say, your mileage may vary.

Footnote:  Sand Dragon also said, “I dare say the possibility exists that some version of Kate may have been introduced in the Genisys sequel (which I doubt will happen now).”  I’m not sure whether he means that there won’t be a sequel or that Kate won’t be in it, but whatever he means he apparently knows something I do not know–not really surprising, but I’ll have to see what I can learn.  Add a comment below (the second response block) or send me an e-mail (the first block) if you know something.  Thanks for reading, and for your encouragement and support.