This is mark Joseph “young” blog entry #26, on the subject of The Cream in My Coffee.

This mark Joseph “young” web log began with a bit of nonsense, a discussion of the odds of winning a game of solitaire and how to improve them (#1:  Probabilities and Solitaire), and we’ve addressed some pretty serious subjects since then–abortion, civil rights, presidential politics, homosexual marriage, copyright infringement, well, you can probably browse the archives–plus a couple of time travel posts.  This one is back to something that is almost nonsense:  How do you add cream and/or sugar to your coffee or tea for the best outcome? 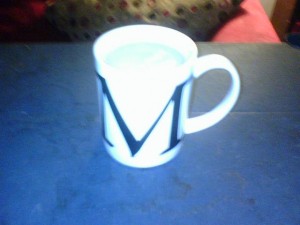 Yes, it seems silly for intelligent people to waste mental effort on nonsense like fixing coffee–something ordinary people do without thinking every day–but in my defense, at least some of this is not my own conclusions but information gleaned from scientific studies funded by governments, universities, and corporations.  (I expect that in Great Britain how to make the perfect cup of tea is still high on the list of national security issues.)  I’m just taking a bit of a break from other matters to share a few secrets about cream and sugar and hot beverages that I’ve picked up over the years; I’m not nearly in the class of those who engaged in a funded study, and the part of this that took the most dedicated time was probably getting the photo of my coffee mug.

If you drink your coffee black, this is not more than a curiosity–information you can use to annoy people whose introduction of lighteners and sweeteners to their hot beverages is less than fully efficient.  However, “black” is not the first choice in the consumption of either beverage, and indeed for coffee, “regular” means one dose of sugar (about a teaspoon) and one dose of cream (about a tablespoon) per six- to ten-ounce cup.  So most coffee drinkers, and probably most tea drinkers, can learn something, or at least confirm something they knew or suspected, from this discussion.

I drink my coffee “light and sweet”–that’s technical talk for double cream, double sugar–and blame my mother and the Baptist church.  There was a coffee hour after the service (not an hour, certainly, but that’s what it was usually called) at which there was always coffee, sometimes cookies or something.  I don’t know whether they also had tea, but what they did not have was a beverage for the mass of children of that baby-boom generation.  I don’t remember other children hanging around there, though, so maybe their parents felt it was better to make an escape with the children than risk some kind of parental embarrassment, and mine thought it was better to socialize with other church members during that time.  In any case, my mother’s solution to the beverage problem was to take four of the styrofoam cups, shovel a few spoonfuls of sugar into each, barely cover the sugar with coffee, and then fill the cups with milk, and pass these out to the four of us.  I once worked with a girl who took eight creams and twelve sugars in a standard six-ounce styrofoam cup of coffee, and really, I’m surprised that with my introduction to the beverage that’s not how I drink it.

I have never used artificial sweeteners.  Apart from the fact that they never tasted right, I have always thought that there was something seriously wrong with anything that tastes sweet but contains no sugar–and apparently my instincts were correct, because it has more recently been determined that at least the most common artificial sweeteners stimulate something in the brain that causes shifts in your metabolism stimulating weight gain.  I’ve gained enough weight since I hit “middle age” (that’s when you stop growing up and start growing in the middle), but replacing sugar with something that tries to trick me into thinking it’s sugar is not my idea of a good solution to that.  However, most artificial sweeteners come in soluble powders or crystals, so what is said of sugar is true of them as well.  There are some liquid sweeteners–honey in tea the most common–which pose different problems, so we’ll start with sugar and powdered sweeteners.

The hazard of powerdered and crystal sweeteners is their tendency to coat the bottom of the cup–you pour the sugar into the coffee, and it goes to the bottom.  You stir it with one of those ineffective stir sticks or straws, but somehow often when you have downed the coffee, there’s the sugar.  This means your coffee has not been as sweet as you intended, and you wind up with at least one swig of almost pure sweetener as you down the dregs.  This is what you want to prevent.

Your primary ally in this is that coffee is hot, and if you connect that with the fact that it is moving rapidly when you pour it into the cup you can see the obvious answer:  put the sugar in the bottom of the empty cup, and then add the hot liquid.  The swirling motion of the coffee will lift the sugar, and combined with the heat it will rapidly dissolve it into the liquid.

Note that the moment you pour coffee into your cup it starts cooling rapidly–first because the cup itself is considerably cooler than the coffee, second because it is now out of the carafe or thermos and has a lot more surface area per unit volume exposed to the air.  I’m digressing here, but if you ever wondered why those professional coffeemakers (like Bunn) use nearly spherical carafes instead of seemingly more practical cylindrical pots, this is the answer.  A cylinder takes up less table space per unit volume, but what matters particularly with coffee is preserving its temperature.  Leaving it on the heat (or leaving the heat on it) gradually overcooks it, so you want to maintain its temperature with the lowest possible addition of heat.  The coefficient of cooling of any body is dependent on the ratio of surface area over volume–the reason children are more susceptible to the cold than adults, they have a greater ratio of exposed skin per unit of internal mass.  The sphere is the geometric shape that has the lowest such ratio; it contains the maximum volume for the same surface area.  Thus coffee in a spherical carafe stays hotter longer than coffee in a cylindrical pot of the same volume–and considerably longer than coffee in your cup.

This probably also applies to honey, used more commonly in tea than in coffee.  Because of its viscosity, the heat of the liquid is critical to the dissolution of the sweetener.  Artificial liquid sweeteners might be different, depending on their viscosity, their solubility, their storage temperature, and the quantity used.  A few drops of a room temperature liquid is not going to make much difference to the process; a tablespoon of a refrigerated liquid might be significant.

Powdered creamers have a distinct problem:  they tend to clump.  They do so considerably less in hotter liquids–part of their dissolution process involves something akin to melting, as they are chemically similar to plastics (sorry, you didn’t want to know that).  You again want the coffee to hit the creamer while it is at maximum heat–but because of the texture of most powdered creamers, they form skins that keep some of the powder sealed away from the liquid, and hence the clumps.

If you are using a sugar or a granulated or powdered sweetener with characteristics similar to sugar, there is a simple fix:  mix the creamer with the sugar.  If the bottom of the cup is wet (e.g., if this is your second cup of coffee) put the sugar in first and swish it so it keeps the creamer from the residual liquid, then add the creamer atop the sugar and shake the cup gently so that the two mix.  The granulated sweetener will disrupt the powdered creamer, and the two will dissolve evenly into the hot liquid when it hits the cup.

Unfortunately, if you drink “cream only” or “light no sugar”, this does not help.  It’s still important to make sure that the creamer is not clumped–if it is, use the stir stick to break the lumps, because otherwise these become natural protective balls enclosing undissolved powder.  And again, the hotter the liquid is when it hits the powder, the more thoroughly and swiftly the powder will dissolve.

This is the hardest part of the process to answer definitively, because there are factors pulling in opposite directions.

To the one side, the moment the liquid cream hits the coffee, even if it is room temperature, the coffee begins to cool.  This means if you are using sugar–or indeed, honey or most other sweeteners–you want the sweetener to dissolve before you add the milk, because you need the heat of the liquid to facilitate the process.  Thus it makes sense to put the sugar into the cup, add the coffee, and then add the cream.

It has also been noted that if you like your coffee hotter rather than cooler, and you have just poured the coffee and are about to add the cream when the phone rings, you should add the cream before you answer the phone.  Because of that coefficient of cooling, the greater the temperature difference between an object and the surrounding air the faster it cools, and thus if you add the cooling cream sooner the rate of cooling due to the surrounding air lessens drastically immediately, whereas if you delay adding the cream the coffee is cooling rapidly and then cools additionally when you return to add the cream.

However, recent studies have determined that adding cream to tea (I told you the matter was of national importance in Great Britain) is very different from adding tea to cream.  That is, because cream (or milk) is in essence an emulsified fat, heat causes it to separate.  If you add hot liquid to an ounce of cream, of course the liquid cools as it hits the cream and the cream is heated relatively gradually.  If, though, you pour an ounce of cream into hot liquid, the cream is rapidly heated as it strikes the surface of the liquid and begins to separate from that heating.  Your beverage is less “creamy”, not as smooth, because it is not as well blended.  Thus for a smoother, creamier, beverage, you want to put the cream in the cup and then add the coffee.

This is, of course, problematic if you are also using sugar, because you want the hot coffee to dissolve the sugar before it begins cooling, and the cream is going to protect the sugar from that heat.

I have not found a resolution to this problem, apart from the possibility of putting sugar in one cup, adding coffee, putting cream in another cup, and pouring the sweetened coffee from the one cup to the other.  That is more trouble than it’s worth, I think, so when I am not using powdered creamer I generally add the cream to the sweetened coffee, rather than the other way around.

So now you know some of the physics and chemistry behind lightening and sweetening your coffee or your tea.  Perhaps it will help you make the perfect cup for your own tastes.