This is mark Joseph “young” blog entry #17, on the subject of Interstellar Quick Temporal Survey.

As we did with Termintor Genisys, we are giving a quick one-shot look at the temporal issues in Interstellar–a star-studded science fiction epic film well worth seeing, Michael Caine, John Lithgow, Ellen Burstyn, and Matt Damon in supporting roles behind a lead of Matthew McConaughey and Anne Hathaway in completely serious (not romantic or comedy) roles.  I must thank Lamont for providing the opportunity to view a digital copy.  I am not certain this time whether there will be a followup full analysis, because there probably is not that much that won’t be covered in this short piece, and the digital copy is not so good, with occasional garbled dialogue.  Still, the essence of it came through. 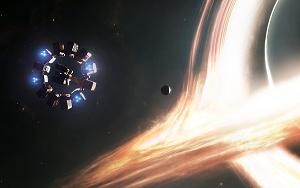 For most of the movie, time travel is not an issue.  It does an excellent job of presenting the time dilation effects of relativity–how gravity and motion cause time to run at different rates for persons in different frames of reference.  As a result, The main characters, McConaughey’s Cooper and Hathaway’s Brand sent on a spaceflight through a wormhole to another galaxy then spending a few hours on a planet orbiting a black hole where every hour on the surface is seven years back on the ship and back on earth, are still young when his children are grown.  I was a bit uncertain about their experience of passing through the wormhole.  My understanding is that there is no time, and thus no temporal experience, of such a trip, but movies have usually treated it otherwise because it is a difficult experience even to imagine, nevermind to show.

This story almost made it, with only two minor problems that might be fatal.  Our time travel elements appear when Cooper sacrifices himself, falling into a black hole with the booster rocket that propels Brand toward the safety of her destination.  There is a bit of a flaw in that:  the only ways dropping the booster gives the ship more momentum are if the ship is pushing against the booster as it releases (the “kick” of recoil on a gun) or if the ship has other engines and wants to reduce mass (the reason launch rockets drop spent stages).  Either of those might have been so, but that was not the explanation given.  In any case, Cooper and the robot TARS (voiced by Bill Irwin) both cross the event horizon and find themselves in what seems to be an engineered Escheresque three-dimensional space, by means of which Cooper discovers that he can get behind the bookcase in his daughter Murphy’s room before he left for this flight and become the “ghost” she always said was in there, knocking books off her bookcase and tampering with things in the room to some small degree.  He gives her the coordinates he needs to find the secret NASA installation at which he will become the pilot of this trip–our first problem, an obvious predestination paradox–and also gives her the data the robot recorded on crossing the event horizon of the black hole in a form she will unravel decades later when she is at NASA working with Brand’s father on a formula to crack gravity and so move huge numbers of people into space and on toward new colonies.  He and the robot are then somehow dumped out of the black hole into open space not far from the colonies his now ancient and dying daughter Murphy made possible near Saturn, and is last seen in a stolen ship rocketing toward the wormhole to go find Brand at the new colony she is establishing (with zygote stockpile technology) on the one planet that proved potentially successful as a colony world.

The way to see it is to begin with an original history.

Earth is dying, but there is a secret NASA project working on a way to move humanity into space.  Some unidentified “they” with scientific and engineering skills far superior to our own abruptly drops a wormhole near Saturn, connected to a distant galaxy with a dozen planets having the potential to support life, and a dozen survey teams are sent.  Three of these on planets fairly near each other are still sending regular beacon signals, so NASA sends a crew, equipped with stasis chambers that slow aging, through the wormhole to determine which, if any, will be the best place for the new human colony.

The complication is that somehow Cooper and Murphy have to discover, or be discovered by, NASA.  There is no obvious simple solution for this.  NASA at this point is a top secret clandestine organization which had been disbanded by the government because it cost too much to maintain, and then restarted covertly because even though no one could politically defend spending money on it, it became obvious that the earth was dying and humanity’s one hope was to go elsewhere.  Cooper does not know NASA exists.  Meanwhile, they know who he is, and would love to have someone with his piloting skills at the helm of this flight, but with so many deaths and such poor records they do not believe he is alive.  Somehow, though, one of them has to do something that catches the attention of the other.  Perhaps NASA launches some kind of test rocket that Cooper observes, and he backtracks the trajectory.  Perhaps Cooper’s self-driving farm machinery comes to the attention of someone at NASA, and they discover who he is.  These are unlikely scenarios, but something must have happened that connected Cooper to NASA.

Making it worse, Cooper must believe that it was unreliable:  when he gets the chance to send a message to himself in the past, he sends the location of NASA, which means that however he got that location in the original history he wanted himself to have it sooner, or more precisely, or in some way that meant sending it to himself was better than relying on however he found it in the original history.  He thus erases the original cause, and thereafter believes that he would not have found NASA had he not sent himself the coordinates.

From there everything works, as long as we accept the premise that there is some alien life form which has taken an interest in the preservation and advancement of humanity, the “they” which builds the wormhole and which creates the three-dimensional space inside the black hole to enable Cooper and TARS to communicate to the past.  At the moment Cooper decides that “they” are actually a future version of “we”, that the wormhole and dimensional engineering inside the black hole were created by humans from the future, the story collapses.  Before humanity can travel through the wormhole to the distant galaxy and establish colonies in space that will enable us to survive someone must create the wormhole, and if we are dependent upon our future selves to do this and cannot survive without it being done, we die here on earth and never become those future selves.  The only way such a scenario works is under fixed time theory–a bleak fatalistic conception of time under which the story works, but which in its essence undermines the hopeful future the film presents.  It also requires acceptance of the uncaused cause of multiple events which only happen because they cause themselves.

Of course, the solution to this is simple:  Cooper is wrong.  The wormhole and the dimensional space were built by an alien race with an interest in preserving humanity.  They never introduce themselves because the dimensional differences between them and us are overwhelming, but they did this in part so that we would know they exist.  Leave it to humans to conclude that the help that saved us came from ourselves, and miss the point entirely.

So that’s the story.