This is mark Joseph “young” blog entry #125, on the subject of My Presidential Election Fears.

I mentioned (originally in #68:  Ridiculous Republicans back in March, most recently this past week in #123:  The 2016 Election in New Jersey) that this election was going to be about whom you vote against.  A lot of people are afraid, very afraid, that one of these candidates will win–probably equally applicable to both candidates, and some voters are afraid of both.  I have thought about it, and agree that there is reason to be afraid, but I think I am afraid of only one of them.  So permit me a moment to explain. 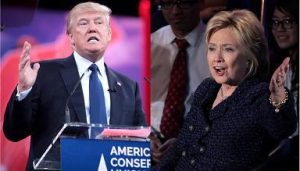 I am not afraid of a Donald Trump Presidency.

I recognize that Trump presents a lot of bluster and arrogance.  He is perceived as a buffoon, a cartoon, a joke.  However, he probably has laughed all the way to the bank more than once.  He is a successful businessman, with experience in the real world both nationally and internationally.  He knows how to run a business, even several businesses.

The perception of Trump from the outside is that he will make many rash decisions.  One does not become ludicrously wealthy by making rash decisions–bold, yes, rash, no.  Rather, there are two things which someone successful in business learns very early, or he does not continue to be successful for long:

This, incidentally, appears to be how Ronald Reagan ran his White House:  surround yourself with people who know what they’re doing, and trust them to do it.  I don’t say that Trump is another Reagan; I do expect that he would follow that same effective pattern.  Presidents who think they know how to do everything and try to control it all are generally viewed as lesser successes–Wilson, Carter.  Those who know how to obtain good advice and delegate important tasks and decisions prove to be the best executives–and the President of the United States is ultimately an executive, not different in kind from the president of a multi-national corporation.

I don’t know that he has always been completely honest, but I believe that he has avoided doing anything illegal, and I think that he means what he says even if he’s a bit dramatic at times.  I think in those senses he is trustworthy.  He might rattle the big stick quite a bit, but under the bluster he obviously has enough sense to make things work.

As far as some of his “crazy policies”, well, despite the nonsense our present President has tried with his executive orders attempting to end run the legislature, Presidents do not get to do whatever they want.  I don’t see even a solidly Republican Congress rubberstamping his ideas, and I’m doubtful we’ll have a solidly Republican Congress.  The laws that do get passed will be no more nor less ridiculous than those passed in the past, because we have a good system that works well in that regard.  The legislative branch is totally independent of the executive, and has a fair amount of influence over executive appointments and actions, so there is a check in place for all of that.

I am afraid of a Hillary Clinton Presidency.

The simple reason is that I do not trust her.  I believe that she lies to obtain power, wealth, and fame.  I don’t see that changing simply because she gets it.  There are serious concerns about whether she and her staff are guilty of treason in leaking classified information through carelessness–and while one might thereby excuse it because everyone makes mistakes, there are also serious allegations of influence peddling when she was Secretary of State.  There is the potential that she will be indicted for any of these offenses before she can take the oath of office.

I do not want our President to be available to the highest bidder.

I do not want our President to lie to us about her intentions or her actions.

I do not want our next Supreme Court nominee, or appointee to the State Department, or any other government official to be selected from the short list of Clinton Foundation donors.

I have had enough of government corruption and overreaching with the present administration, and would like to see it ended.  A Clinton Presidency would more likely escalate it.  There is good evidence that she has lied, cheated, and stolen in the past, and no evidence that she will do otherwise in the future.  I would prefer not to give her that opportunity.

I believe that we are all in God’s hands; that does not mean He will protect our nation.  We will get either the government we need or the one we deserve.  That might not be the one we like, but God knows what He’s doing.  My fears might become reality, or they might be allayed; I might be wrong in my assessment of the dangers in either direction.  However, I am going to vote against the candidate I most fear.  We do not need a Democratic version of Richard Nixon.