This is mark Joseph “young” blog entry #119, on the subject of Character Projects. 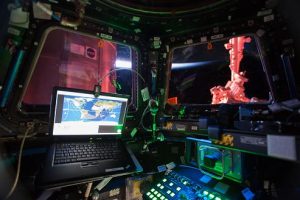 I think when I put this vampire here, I didn’t know what it was doing.  I developed that as I went.

It was simple good fortune that I had decided previously on two ghouls—well, not exactly.  I had done so precisely because I wanted each of my heroines to have exactly one opponent, so that Lauren would not be able to kill the enemy quickly enough that Bethany did not participate in the fight.  It thus worked out that the vampire here, looking for those same ghouls, was looking for two persons, and Lauren had the momentary fear that it would be she and Bethany.

The idea that a vampire could “play dead” was something new here; the way Lauren managed to deduce that it wasn’t was also new.

Derek’s internal argument amounts to the recognition that if you don’t try deceit first you lose the opportunity, and that honesty in this situation was unlikely to be believed.

I didn’t want Derek’s hack to seem simple, so I gave the impression it took several days in which he ate his rations and slept in hidden corners.  It still happens quickly in the context of the book, because I didn’t see this as a terribly interesting aspect of the story, but it should feel like it took several days to do this.

Derek fails because of specialization:  he is so good at computer security he fails to consider whether there might be another kind that would be a problem.

I think at this point I realized that I had dropped Joe in a relatively dull storyline.  Even if it might be fascinating to read about the development of a new technology, a new scientific discovery, the fictional account of such a thing not actually discovered in reality was much less interesting.  I was creating the background but in a way still looking for the story; much of what was happening here really was that Joe was getting an education in fields he would want to know in the future.

The fact that he, a nineteen-year-old fresh-from-high-school military recruit, was now at graduate student level in a field he only began studying on arrival here should convey that he has been working on this for several years, without dragging out the years.

I needed to extend the search and keep the girls together longer, so I decided that Lauren’s magic either failed or was opposed at this point, sending them in the wrong direction.  I don’t think I’d yet decided which as the chapter started.

Lauren makes the point that it is possible not to know an answer not because you have no idea but because you have too many.  Her process of elimination is an effective means of reasoning through problems of all sorts, not just spell failure.

We see police dramas in which they leave a suspect sitting in an interrogation room for a while to “sweat” him, to get him worried about his situation.  Derek considers that as a possible explanation for why he is sitting alone in such a room, but recognizes that he knows so little about this world there could be what to him is an entirely fantastic reason.

It also gives him a chance to think about his situation, which he does.

Derek is again thinking in terms of his life being like a movie:  this is what happens in scenarios of this sort.

People tend to say that the coral bushes of NagaWorld fire laser beams, but Derek, having studied some advanced physics and electronics, would know that that’s probably not the case (it isn’t—they use mirrors and lenses to fire focused light) and would not use the wrong word.

Derek recognizes that it is entirely possible that he is dreaming all of this, but that if he is that’s not going to be something he can prove even to himself.

I was in essence inventing the technology as I went along.  It was going to matter, ultimately, that Joe understood it.

The comment about everything he knew being the equivalent of a high school physics class in some universe reflects the observation that as our knowledge increases, the amount we regard as basic also does.  The math and science classes my kids took in high school contained at least some things that I didn’t learn in college.

Lauren hits several possible explanations for who might be misdirecting them.  I could probably have given more, but the point was only to establish that it didn’t have to be vampires.

Downhill is actually harder than uphill, but it doesn’t feel as hard, and the cart makes a difference, too.  Most people think uphill is harder, and thus psychologically it is.

It makes perfect sense that a verser telling the truth to authorities in a modern setting would face a psyche evaluation.  Derek realizes that that’s what this is, but doesn’t quite know how to get out of it unscathed.

Derek’s ultimate defense is that the authorities do not have a better explanation for him than the one he gives.  That proves nothing, really, but it does shift the burden of proof significantly.

It was important that Joe was involved in the project and sometimes contributed, but equally important that he didn’t solve everything himself.  So I had him make suggestions and mixed them with the work of others to get the combination.

The Pernicans at this point were connected effectively to the Phoenicians, among the earliest of those traveling the oceans in large ships in the west.