This is mark Joseph “young” blog entry #110, on the subject of Character Redirects. 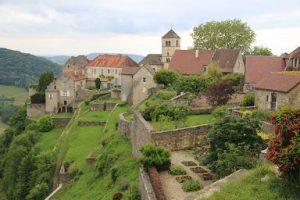 I brought Lauren to stage three at this point, although I didn’t get into details.  That is, she realizes that she is awake; she has been awake but didn’t know it.  Also, I’m going to step her backwards in a future world—that can happen, but it’s unusual, but I need to do it for the beginning of the fifth novel.  But the idea of becoming accustomed to dying seemed significant at this point.

Again we have the idea that she has to choose a direction, and even with only two directions she is opening some possibilities and closing others with the choice.  She resolves her concerns by making as rational a decision as she can—keeping the sun out of her eyes for a while—and trusting that God will get her where He wants her to be.

Once she confronts the familiar place name, she needs a way to identify whether it is the right place in the right universe.  Getting to her cave is the easy way; it stands a good chance of being pretty much the same after only a few centuries.

It becomes a pattern for Lauren, that she gathers people around her, gets them working together with her toward some goal, and then she gets killed but they keep going.  She thus changes worlds by creating something self-perpetuating before she leaves them.

The word Derek uses for the head of the school is of course “principal” and not “dean” because he went to schools that had principals.

We have reached the reveal:  Joe has solved the mystery.

Kondor starts talking before he knows what he’s going to say, honestly because at this point I wasn’t sure what he was going to say.  I’d written myself into a bit of a box here, following the logic of the conversation, and now I had to find a way out of it.

Both of my adversaries here were good, each trying to outmaneuver the other.  It was difficult to get it to come out with Kondor as the winner, because Krannitz really was a smart illusionist expert in misdirection.

Figuring out what would change and what would be the same in a wood that stood undisturbed for some unknown number of centuries took a bit of thought and some tapping into my experience.

The idea that the woods would be a terrible waste of space if no one lived in them is in one sense a bit silly, but it really is in another sense perceptive.  The woods must be there for a reason; the best reason is to be a place for someone or something to live.  Extrapolating the existence of forest people doesn’t necessarily follow, but a good case can be made for it—and in that universe, it happens to be correct.

I knew, and perhaps the reader knew or should have known, that this was the time when Lauren would meet and begin teaching Bethany.  However, it was important to me that it happen naturally, that is, Lauren is not looking for Bethany and not really expecting to find Bethany; she finds a young girl who impresses her with her insight, her intelligence, and offers to teach her something, and then discovers that this is the girl she met in the future.

I wanted time to pass without spending a lot of the book talking about it, and leaping in with the idea that everyone else had aged ten years and Derek looked the same covered that adequately.  It would include however long Lauren was there, which was maybe three or four years, but would give Derek plenty of time to become quite proficient at his interests.

The explanation about Lauren and Derek being versers is not really necessary for the reader, who already understands it, but helps in giving some form to Derek’s own understanding of it.

I eventually would need to move Derek to another world, and barring another classroom incident I was either going to have to have him kill himself on a botch, probably with some kind of high-tech equipment, or get him to move out of the compound into the more dangerous world.  The latter had more interesting story possibilities.

With the arrest, I needed to make it seem like a modern world without making it the same as our world.  I had some advantage in having watched British television, particularly A Touch of Frost, and so had heard the different version of what in America are called “Miranda Rights” (after the defendant in the case in which the Supreme Court affirmed them), but I didn’t want them to be the British version, either.  So I thought about what might be said in my other world, and came up with a plausible statement.

Kondor’s problem was my problem.  I had envisioned a continuation of the game in which he worked as a magician’s apprentice (and later when I ran this part of the game for Graeme Comyn, he did exactly that).  I didn’t have another next step for him, and having Merrick suggest he come by to discuss a possibility was a stall on my part—I had nothing in mind in that direction.

As I came into this scene, I wondered how Lauren proves her identity to people who only know her legend.  The answer presented itself:  she knows the name of the wolf whom she taught to walk the twilight, who is the ancestor of the present pack mother.  Since Garla was not the pack mother at the time, there is no other reason why Lauren should know the name but that she was the teacher.

One of the problems with versing is that even people who believe it have trouble understanding it.  Dorelle asks obvious questions that completely misunderstand the problem.

I’m beginning to work on an adventure, but I don’t know how I’m going to do it—which is fine, because it makes the feeling of uncertainty all the more palpable in the character discussions.  They don’t know how to find a place to explore, either.

I had set myself up for the possibility that Merrick would have an idea to help Kondor figure out what to do next, but I didn’t have any such idea.  So I took Merrick away for a few days, figuring I could fill in story details and maybe have something else by the time he returned.