This is mark Joseph “young” blog entry #451, on the subject of The Bethel/Hillsong Music Controversy.

A long time friend asked me via Facebook private message:

You would most likely know about this.  I just watched a debate over Bethel and Hillsong music being played in worship services.  Since I am unfamiliar with them I could not follow the debate.  Perhaps you could shed some light on this.

Quite honestly I have not followed the details, and my friend might be better informed on this than I; but I think there are points worth considering. 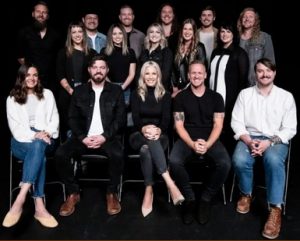 There are of course those who object to using contemporary music for worship at all.  I encounter these arguments frequently, and there isn’t really any substance to them.  Some say that the contemporary music sullies the holy message, but the Reformers and the leaders during the Great Awakenings all used secular songs, usually bawdy songs sung in bars, to set Christian words and make our hymns.  Some argue that most contemporary songs aren’t very good, but that’s true in every era, and to some degree time is the test as most of the songs that aren’t good are forgotten and some of those which are survive.  In the end, the contemporary songs of the present are the great worship songs of the past in the future.

But it is specifically the songs of these two groups that are the target of this objection, and they have something in common:  they are worship bands from very large churches.  Thus the question becomes whether their churches taint their music, or more specifically their lyrics.

The first question in this is of course whether the churches themselves are heretical.  That’s not an easy question.  After all, there are Catholics who think Baptists are heretical, and Baptists who think the same about Catholics.  Yet both groups have produced wonderful worshipful music over the centuries, and even have borrowed from each other.  Some would paint the entire Charismatic/Pentecostal world as heretical, others as the fruit of the Third Great Awakening.  As a wise Quaker reportedly said to his best friend, “Everyone’s a little queer ‘cept me and thee, and sometimes I’m not so sure of thee.”  Many would label the entire Prosperity Gospel movement heretical, but others would say they’re just a bit misguided, and obviously there are many who believe their message.  At the same time, behind the first question is the question, does that matter?

It leads to the second question, which is, does the supposed heresy of the church impact the lyrics?  That is, do these songs preach or teach a false message?  That is a more difficult question.  After all, there are a plethora of songs about the pre-millenial return of Christ, most of them pre-tribulation, and while that’s a popular view it’s not necessarily the true one.  Every once in a while I hear a song that recalls the submission and discipleship theology of the 70s, and I usually turn it off.  How wrong does a song have to be to be a problem?  I heard one person object that most contemporary songs aren’t about Jesus about but about my relationship with Jesus–but if we are to sing spiritual songs in addition to psalms and hymns, would that not be included?  Songs that clearly teach a false belief should be discouraged, but I’m not aware that the songs from these bands do that.  Singing songs which are theologically sound popularized by bands from churches which are not is not in itself a problem.

However, there is one other potential objection, which is whether singing or otherwise promoting the songs themselves promotes the ministry behind them.  When songs by Hillsong or Bethel get heavy airplay and rise on the charts through sales, this means money into the pockets of the ministry and exposure to a wider audience.  If there is some egregious error promulgated by these ministries, even if it doesn’t show in their music, supporting the music might help promote the error.  Those who think the Church of Jesus Christ of Latter Day Saints a heresy rightly hesitate to listen to Christmas albums from the Mormon Tabernacle Choir, because the purchase helps fund the church.

That, though, brings us back to the first question:  are these ministries in some way heretical?  I don’t have the answer to that question.  Further, I don’t know that I need the answer.  I am not in a position to influence what songs are sung in any local church, or played on local radio stations; I don’t buy music or subscribe to a streaming service, so I’m only going to hear these songs if one of the local stations plays it.  That does happen, and although I do hear songs on the radio which I wouldn’t clear for airplay were I programming, I don’t think any of those are from the groups in question.

Just to be clear, if I were involved in leading local worship or programming a radio station, this is a question I would seek to answer.  The answer would matter to me in that case.  But that’s their job, and I have my own obligations.  If they think it’s all right to play, I’ll trust that they are aware of the controversy and took the time to address the questions.

2 thoughts on “#451: The Bethel/Hillsong Music Controversy”