This is mark Joseph “young” blog entry #439, on the subject of Corpoises:  Toward a Story.

It was partly a joke, partly serious, in the way that some Dungeons & Dragons monsters are real monsters in the game world but in some way a joke.  I posted it on my Facebook page, and got a couple of likes:

However, in addition to a couple likes, I got a request from a publisher that I “Please write this novel,” so I decided to explore the possibilities. 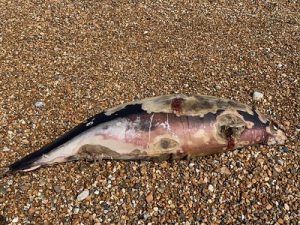 I think the first point to address is a critical aspect of the setting.  If we have undead dolphins and such, to whom or what are they a threat?  Most humans have very little contact with marine mammals, and although we could have them close the beaches, I think people in Nebraska aren’t in any danger, and seriously, telling people they can’t swim in the ocean because there are monsters that might kill them will sufficiently deter enough people that there wouldn’t be a story.  So if it’s people, it has to be something like primitive fishermen, people who live in island villages and rely on small boat fishing for survival.  That definitely limits other aspects of the story.  Of course, the corpoises could be one of many undead creatures, but that reduces their significance, and I feel like this is supposed to be about them.

On the other hand, it’s already fantasy if it includes anything undead, so perhaps I should explore the development of a nation of merpeople, human-like creatures living under the ocean on the continental shelves.  That’s a lot of work in itself, but if we’re talking about writing a novel, that’s not more work than we should expect; it’s only a question of creating something interesting.

We could split the difference and create human undersea colonies that raise some kind of food on the sea floor, which means people would have to go outside the protective domes to do the farming.  That’s another kind of setting to develop, although it would involve fewer unique aspects, being very much a science fiction habitat like others I have done.

Perhaps finally, the porpoise community itself could be the intelligent race threatened by the undead.  It’s worth considering, but then, it might be too alien, Walt Disney meets Stephen King.

My second issue is what kind of undead are we considering, and that’s closely tied to whether there is a theme here.  Traditionally undead creatures are the magical results of necromancy, or sometimes, as with the Revenant, of gross injustice demanding correction.  In modern stories the undead aren’t actually dead but are somehow biologically altered, and that gives a couple options–toxic chemical spills giving us an environmental backdrop, radioactive waste giving us an anti-nuclear substory, or some kind of genetic accident warning against the dangers of genetic engineering.  Currently I’m working on a story for James Beam in which the undead are infected with a brain parasite, and I have not yet decided whether the organism evolved or was created by human action, and might not have to do so, but that’s an option here.  There are other ways to create undead creatures, but they’re generally more intentional, that someone is doing it with a purpose and has some control over the monsters.

My next concern is whether this is horror.  I mean, you would think that if it involves zombies or undead of some sort, it must be horror–but I don’t always feel comfortable with horror.  Oh, I’ve written it.  I frequently mention the beginning of the Derek Brown stories in Old Verses New, in which he visits several horror worlds, but it occurs to me that before that I had written a story based on The Quest for the Vorgo, for Joe Kondor in Verse Three, Chapter One, and I’ve written at least a couple horror scenarios for Multiverser game play apart from those.  Also, my thoughts on the genre in web log post #132:  Writing Horror were apparently valuable enough that they got translated for the Places to Go, People to Be French edition, Maîtriser l’Horreur, so I apparently do know something about it.  On the other hand, as I recently shared in web log post #426:  A Christian View of Horror, genuine horror is at best difficult for a Christian, because in horror hope fails in despair, and for believers hope wins.  That doesn’t mean I can’t write the story; it means I have to give serious thought to what it’s about.

And that is the next question:  what is it about?  Great horror stories are usually about something important.  Frankenstein is about man overreaching to try to create life.  Jurassic Park has a similar theme.  I’ve already mentioned themes about environmental issues and genetic engineering–but do I care enough about these to create a good story from them?  I can see a concept of undead arising from a rejection of God, but seriously, among porpoises?  This is a very difficult aspect of the concept.

Most of that is, of course, setting material.  The last part gives some shape to the plot, but there is no story there.  For that, I’m going to have to create some characters who fit the setting, create some relationships, perhaps a romance, perhaps a family.  I might have to think about who is going to die, and when and how that happens.  I don’t really have a book here at this point.

But I might.  I just have to start finding answers to those questions.

Any reader who has thoughts about such a book is encouraged to respond, in the comments below or on one of my social media pages.