This is mark Joseph “young” blog entry #132, on the subject of Writing Horror.

I don’t write a lot of horror, but I have managed to write some–if you’ve followed the Derek Jacob Brown stories in Old Verses New you can see that I took him through several horror stories (Spoiler Alert an onlooker in Cask of Amontilado, a haunted house, a castle in a swamp populated by a couple of perhaps gruesome creatures, a slasher set at a summer camp), and I’m told by some readers that these are rather frightening tales.  On the other hand, the main story arc for the Lauren Hastings stories which begin in Verse Three, Chapter One is set in a World of Darkness-type vampire setting, and it’s not at all horror–more a kill monsters and get stronger kind of experience.  I don’t like to read horror, although I have done so when people have given me books that happen to fall in that genre, and I don’t watch horror movies unless there is a compelling reason to do so (Terminator and Time Lapse to analyze the time travel elements, Alien, because, well, it’s Alien, classic science fiction with monster on the loose, design by H. R. Giger, kind of a must-see to be literate in geek culture).

However, I think I understand a few things about horror which might help the aspiring writer–or referee–come to grips with how to do it. 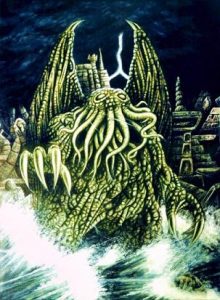 One of the aspects that makes horror frightening is atmosphere.  This is why when people tell ghost stories around the campfire they speak in soft and often slow tones.  It forces the listener to work to hear what’s being said.  The same story told in an ordinary voice loses a significant part of the fear factor.  Similarly, stories told in broad daylight are not as frightening as those told when the lights are low.  If you’re running a game, these are factors you can sometimes include.  Of course, if you’re running it at a table at a convention, surrounded by a dozen other referees running a dozen other games, the light and noise levels are undoubtedly outside your control–but there are still ways you can create atmosphere, by drawing the players in to focus on you, and keeping the descriptions terse.

In writing, there are other tricks.  E. R. Jones once pointed out to me that in one passage in which Poe did not want to loosen the constricted feeling of the story he wrote that someone “unclosed” a door–avoiding the word “open” so as to avoid the glimmer of openness that would come with it.  If you are writing from the perspective of a character, you can incorporate the character’s own feelings and responses.  When I had Derek in the house which he was correctly thinking was haunted, I wrote

Should he risk leaning on a door, which might open into a room in which might be, he tried not to be too specific in his thoughts, anything?

It encourages the reader to fill in the horrors that might be there from his own imagination–and another thing Poe sometimes recognized (as in the end of The Pit and the Pendulum) is that what I can get you to imagine is probably more frightening than anything I can actually describe.  It is the more frightening because it is vague in your mind–you don’t know exactly what it is you fear, but you know that you fear it.

Beyond atmosphere, though, there is the question of risk.  You can read sports scores in the voice of a ghost story, and the only people who will be frightened are Cubs fans.  The reader or player has to have something at stake.

In a game, this is usually accomplished by creating a threat to the life of the player character.  If I am invested in my character and you create a credible threat that means a high probability that he will be killed, and there is little or nothing he can do to prevent it, I am going to be fearful.  But there is that condition in that:  I have to be invested in the character and afraid of losing him.  This was a serious problem for Multiverser in relation to horror, because character death is not the end but only a shift to a new stage of adventure, a move to another world.  We thus had to explore other ways of creating fear in the players; versers laugh at death.

One way is frequently used in fiction:  get the reader, or the player, invested in the life of another character.  That’s why children are so often threatened in horror stories, because we might not care whether the gruff hero lives or dies, but we want to save the kid.  Vulnerable women or girls are also frequently put in this role, so we’ll hope that the hero can save the girl.  When I’m writing or running the slasher summer camp story, I want you to like my campers, because then when my slasher starts killing them you are frightened not so much that he will kill you but that he will kill these other nice kids you’ve gotten to know–and possibly leave you, the stranger who cannot account for himself, as the prime suspect in their deaths.

It is also important to remember that some things are worse than death.  In Multiverser‘s The Web, the danger is not so much that the character will be killed, but that he will become wrapped in a spider-like cocoon, and his nerve tissue will be taken a little at a time over a very long period, leaving him more and more crippled the longer he is held.  In play that world also uses several other tricks, such as beautiful objects which are highly dangerous, seemingly friendly creatures who are treacherous, and a penalty against all actions that “matter”, creating a focus on the futility of effort.  The point is to deprive the player of any hope of preserving his character intact.

That ultimately is the thing to recognize about fear:  it is the opposite of hope.  To make your target fearful, you have to take away hope–and if you take away those hopes one at a time as the situation gradually becomes more bleak, you build fear slowly, until in the end the character either accepts his doom or fights it in futility.

That is the objective of horror, done right.  You still might pull a happy ending out of the hat, but once you do you’ve broken the mood and left the genre.  In horror, everyone dies, but the last ones only die when the last vestige of hope has failed.