This is mark Joseph “young” blog entry #426, on the subject of A Christian View of Horror.

One of my Patreon patrons asked

In regards to horror, how do you view it as a Christian?

It’s a good and difficult question, worth taking some time to address.  I have written some horror, both as segments in novels and as worlds for game play, so I’m not completely against it.  On the other hand, I don’t choose to read horror unless it’s gifted to me, and I don’t watch it unless there’s a compelling reason, such as it’s part of a time travel movie I need to analyze for my readers.  If, though, I can give myself a third hand, a few years ago when I wrote mark Joseph “young” web log post #263:  The Ten Book Cover Challenge, three of the ten books I selected might be considered horror (Charles Williams’ Descent Into Hell, George Orwell’s 1984, and C. J. Henderson’s The Things That Are Not There), which is quite a bit considering that four of the ten were non-fiction. 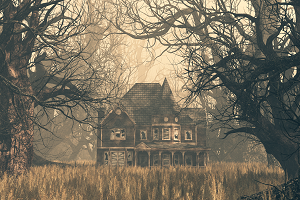 The question arose as a sort of follow-up to an “ask the author” question at Goodreads, Can you tell us a two-sentence horror story?  In response I gave a couple of basic principles about horror with a link to one of my articles on the subject, and I’ll come back to that.

As I wrote in Faith and Gaming:  Bad Things, for many of us negative scenarios become the foil for faith, that is, we see that God is greater than any evil we can imagine.  For others, even the real evils of this world challenge our belief.  For those for whom dark worlds only enhance the light of God, this is a good thing, a way to strengthen hope.  For others, horror is best avoided.

And horror can be used for edifying purposes.  I more recently observed in Faith in Play #28:  Vampires that the undead, used well, were an excellent metaphor for lost humanity.  The story of Frankenstein similarly was a warning about science overreaching, attempting to create life, a lesson we very much need in this age of genetic engineering.  My own Post-Sympathetic Man (in Multiverser:  The Second Book of Worlds), which Lovecraft and Poe fan E. R. Jones said was one of the darkest scenarios he’d ever encountered, attempts to highlight the outcome of a thorough application of survival of the fittest as a life philosophy.  When I wrote Old Verses New, I took Derek Brown through several horror worlds in rapid succession because I needed to teach him he did not need to be afraid.  Dark scenarios have their positive values, used aright.

The problem, though, is that horror done right, as I conclude in web log post #132:  Writing Horror, is about hopelessness.  As hope is the enemy of fear, the well done horror story has to strip it away and leave the characters hopeless, taking the reader with them into despair.  Lovecraft understood that, and wrote with that objective.

For what it’s worth, Lovecraft’s Cthulu work never frightened me.  I think that was a case in which I knew that nothing he could imagine or cause me to imagine was greater than my God.  It kind of took the the sting out of it.  In fact, author C. J. Henderson confided that he had a problem when he started writing Cthulu horror, because whenever he put his characters into these horror scenarios they insisted on fighting back, and usually they won.

That really is the Christian understanding of horror:  ultimately God wins, as He is greater than any evil we can imagine.  That’s not the way horror is supposed to end, but that is ultimately the truth.

So I suppose that’s as close an answer as I can give:  the Christian can certainly entertain dark “horror” scenarios, but in the end evil fails and hope wins, and that is not horror.