This is mark Joseph “young” blog entry #289, on the subject of Stifling Lozman’s Protected Speech.

From one perspective, the most interesting thing about Fane Lozman’s recent victory at the United States Supreme Court is that it is the second time this ordinary citizen has taken a case to that court, and the second time he has won.  It really does happen in these United States, although in fairness he solicited aid from a law school and a group of pro bono attorneys.

The reason it is of interest to us is that this second win is an Amendment I Freedom of Expression case, a subject we follow with some interest. 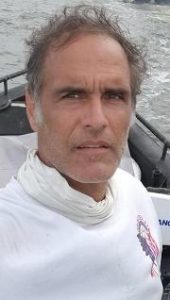 The previous case is only of passing interest to us, more as background to the second.  Lozman built a floating house, which he had towed to various places until he docked it at a marina in Riviera Beach, in Palm Beach County, Florida.  The city wanted to exercise eminent domain over the marina to seize it, tear it down, and put it in the hands of a commercial developer.  Lozman objected, and brought a lawsuit against the city for improper procedure when they attempted to pass the measure a day before a Florida state law went into effect making such use of eminent domain illegal.  He won that suit.  However, while he was involved in this, the city declared that his house was a “vessel” under maritime law, and seized it.  Lozman fought this, stating that his house was not a “vessel” under the definitions provided in the law, and therefore not subject to seizure under that law.  In Lozman v. City of Riviera Beach, Florida, 568 U.S. 115 (2013), the Supreme Court agreed.  The house was not designed to be a mode of transportation, and for this and several lesser reasons the court concluded 7 to 2 (Sotameyer and Kennedy dissenting) that maritime jurisdiction was inappropriate, and the city owed Lozman a lot of money to replace his home.

In the midst of these battles, Lozman showed up at a City Council meeting, and during the public comments time stepped forward and began calmly talking about political corruption.  It is said that he spoke for about fifteen seconds when one of the Councilmen instructed the police officer who was present for the purpose of maintaining order to remove him from the room.  He was handcuffed and charged, but the charges were dropped.  However, he filed suit claiming that his Amendment I right to free speech was violated.

In Fane Lozman, Petitioner v. City of Riviera Beach Florida, 585 U.S. ___ (2018), the Supreme court in an 8 to 1 decision said that it was–but noted that there were special circumstances that made it so.

At the head of those special circumstances, Lozman had presented evidence to the effect that the City Council had previously adopted an official policy of intimidation against him and others who had spoken out against them, and asserted that his arrest was executing that policy.  The evidence included a transcript of a closed Council meeting in which Councilmember Elizabeth Wade suggested that the city use its resources to “intimidate” Lozman and others who had filed lawsuits against the city.  At a later point in the meeting, one of the other councilmembers asked whether there was “a consensus of what Ms. Wade is saying,” and this was affirmed by others present.  Lozman asserts that these remarks formed an official plan to intimidate him.

The lower courts held that because there was probable cause to arrest Lozman at the meeting (on the very minor charge that he did not stop speaking when asked to do so, and thus was considered disruptive to the meeting) he could not claim the arrest was retaliatory.  However, the Supreme Court decided that if a jury might believe that the closed door meeting comments created an official policy of retaliation, and if the arrest at the later meeting was an implementation of that policy, Lozman would prevail.

It does not mean that all cases in which people are arrested for trying to speak at public meetings and so disrupting the meeting involve violations of Amendment I free speech rights, but only those in which there is evidence that the arrest is part of a government policy of intimidation against the person arrested.

Justice Thomas dissents, stating that the rule propounded by the majority is too convoluted and might never apply in any case including the present one, and that the previous rule in essence said that if probable cause was present no case for retaliatory arrest could stand, even if it involved freedom of speech.

Justice Thomas is right:  it is a bad decision.  It allows governments to harrass citizens exercizing their freedom of speech at meetings as long as there isn’t a paper trail suggesting that they agreed to do this.  Lozman probably wins (and I think that when Justice Kennedy writes that a reasonable juror would have to be able to believe that the statements at the closed meeting created a policy and that the action at the open meeting implemented it he believes that they would) because the idea of intimidating him was discussed on the record at a meeting.  If the Committeemembers had discussed this at a coffeeshop or cocktail party and agreed informally to do this, he would have no case–but his rights would have been just as impinged.

Meanwhile, the dissent’s probable cause test is worse.  I once was discussing a law that deprived anyone who had been convicted of a felony of certain rights, and commented that felonies were generally rather serious crimes.  I was informed that legislatures had taken to defining more and more crimes of lesser and lesser severity as “felonies” in order to enforce stricter penalties against them.  In the present case, it seems initially Lozman did not believe there was probable cause for an arrest, and there was some doubt as to whether there was probable cause for the charges initially brought.  He was charged with disorderly conduct and resisting arrest without violence–the former because he stepped up to the podium to raise issues at a public meeting, the latter because he refused to relinquish the podium when asked.  The District Court found that as a matter of law there was insufficient evidence to support probable cause for either of those charges.  However, the city dug up another statute prohibiting interruptions or disturbances in schools, churches, or other public assemblies–a charge never mentioned prior to the trial–and maintained that there was probable cause to arrest Lozman on that charge; Lozman conceded that there was probable cause for that.  That, though, shows that if the authorities want to arrest someone, they can probably find probable cause to do so if they look hard enough.

What was needed was a looser rule, one that permitted evidence of a pattern of intimidation to stand as proof of an intention of intimidation.  Lozman’s case adduced many incidents of arbitrary official actions taken against him; the stifling of his right to speak at the public meeting was the most egregious because it impinged his Amendment I freedom of speech.

The claim that Lozman’s speech was off-topic was insupportable.  In the first fifteen seconds he spoke of two government officials in other jurisdictions that were arrested for corruption.  That could be the preamble to any of a dozen on-topic speeches.  For the committee to have claimed he was speaking about something outside the parameters of the meeting is not defensible.

Congratulations to Lozman for winning twice at the Supreme Court (and winning several lower court cases along the way).  However, this decision is going to have to be modified by future ones before it is at all useful in the defense of free speech.