This is mark Joseph “young” blog entry #247, on the subject of The Homosexual Wedding Cake Case.

The case, as decided by the United States Supreme Court, is MASTERPIECE CAKESHOP, LTD., ET AL. v. COLORADO CIVIL RIGHTS COMMISSION ET AL., 584 U. S. ____ (2018), and it is one which I, at least, have eagerly anticipated.  It is the case in which the baker was convicted of violating the civil rights of a gay couple by refusing to design a wedding cake for them, on the grounds that it was an artistic expression which violated his rights of freedom of speech and religion.  It had been expected to help find the point at which religious objections to homosexuality would or would not stand against legal rights of homosexuals, although it does not seem to have done so. 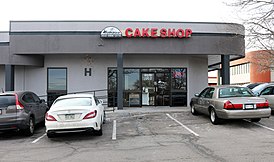 The media has called this a “narrow” decision, and many have asked how it can be “narrow” if it is a 7-2 vote.  The narrowness is entirely in what was decided.  Virtually nothing concerning the balance between religious freedom and homosexual rights is solved by this case, which in its majority opinion decided only that the Colorado Civil Rights Commission seriously violated the protected religious freedom of the baker, Jack Phillips, and so its ruling could not stand.  It observed that in Colorado in the year these events occurred such a refusal was reasonably understood to be legal, although it might not be so now (because Colorado had not legitimized homosexual marriage at that time and has since done so).  However, the case is a slap in the face of progressivist atheists who want to force the opinions of religious conservatives out of the political and commercial arenas.

Justice Kennedy delivered the opinion of the court, joined by Chief Justice Roberts and Justices Breyer, Alito, Kagan, and Gorsuch–six votes for the majority opinion.  Justice Thomas filed an opinion concurring in part and concurring in the judgment, which gives seven votes for overturning the Colorado decision, and Justice Ginsberg dissented, joined by Justice Sotomayer–but the splintering went beyond that, as Justice Kagan wrote a concurring opinion in which Justice Breyer joined, and Justice Gorsuch wrote a concurring opinion in which Justice Alito joined, so we have five written opinions on the matter, and a very small sliver of agreement on the issues.

Justice Kennedy begins by clarifying that in all matters in which religious liberty is at issue, the State is required to be a neutral arbiter showing a respectful attitude for the expressed religious beliefs of the parties involved.  It is certainly possible that a businessman might be compelled to provide services to which he objects, provided that the law is religiously neutral and does not directly attack his beliefs.  The problem in the Masterpiece case is that far from neutrality there was evident animosity toward religion.  In the first hearing, one of the commissioners said that Phillips can believe “what he wants to believe” but cannot act on those beliefs “if he decides to do business in the state.”  The same commissioner restated that view moments later, according to the record, saying “[I]f a businessman wants to do business in the state and he’s got an issue with the—the law’s impacting his personal belief system, he needs to look at being able to compromise.”  At the next hearing, a different commissioner was recorded saying

I would also like to reiterate what we said in the hearing or the last meeting.  Freedom of religion and religion has been used to justify all kinds of discrimination throughout history, whether it be slavery, whether it be the holocaust, whether it be–I mean, we–we can list hundreds of situations where freedom of religion has been used to justify discrimination.  And to me it is one of the most despicable pieces of rhetoric that people can use to–to use their religion to hurt others.

Kennedy noted that this twice disparages the baker’s religious beliefs, first by calling them “despicable”, and again by claiming they are mere rhetoric having no substance or sincerity.  None of the other commissioners present objected to these statements, and they were never repudiated in the record that included appeals courts in Colorado and an appeal to the Supreme Court.

Yet if we think this is just rhetoric, that somehow the expression of such hostility toward the baker’s religious views did not indicate judicial bias against him, Kennedy goes beyond this to observe that the same commission during the same period of time considered three other cases in which bakers who declined to make cakes for specific groups were cleared of any wrongdoing based on their claim that it would have compelled them to make statements they regarded offensive.  In all three cases, the bakers had been asked to make cakes expressing anti-homosexual views, and refused to do so.  The commission in those cases concluded that the bakers could not be compelled to express opinions they considered offensive.  In this case, however, the commission claimed that the opinion expressed on the cake would be attributed to the purchasers of the cake, not the baker, and so his speech was not protected.  Further, in the other cases the commission said that the fact that these bakers were willing to sell other products to the customers absolved them of the charge of refusing to do business with those customers, but in this case they said that Phillips’ willingness to sell birthday cakes, cupcakes, cookies, even shower cakes, was irrelevant given his refusal to make a wedding cake for them.  The lower court, it was noted, dealt with this in a footnote, to the effect that the cakes requested in the other cases would have required expressing offensive statements, but the one in this case did not–which, as Kennedy notes, is passing judgment on the religious values of the baker by declaring that what he finds offensive is not offensive.

Thus the case that Phillips’ won is in essence that his religious views were mistreated by the judicial process, which should have accorded them greater respect–particularly as the commission for the protection of civil rights in this case is also charged with protecting the civil rights of religious groups.  The point is made that this case says nothing about how such cases might be decided in the future, but that the religious views and liberties of individuals involved must be respected and treated impartially by the government.

So, what about all those other opinions?

Justice Kagan makes the point that the decision is limited specifically because it is based on the express bias of the adjudicators.  She asserts that the commission could have treated the religion issue respectfully and impartially and still reached the same result, and that the other cases can be distinguished on the basis that the bakers would not have made cakes with those messages for any customer, but Masterpiece would have made wedding cakes for heterosexual customers.

It is a slim distinction, which Gorsuch rejects in his concurring opinion.  He first notes that when religious rights are threatened by legal action, strict scrutiny applies–the government has a heavy burden to prove complete neutrality in regard to religion in the case.  He is satisfied that the majority opinion reaches that result.  As to the cake, Gorsuch agrees with the baker in distinguishing a heterosexual wedding cake from a homosexual wedding cake, against Kagan’s view that a wedding cake is a wedding cake, and the distinction is prejudicial against the customer.  Yet Kagan asserts that requiring a baker to make an anti-homosexual cake with messages the baker finds offensive is something that baker would not do for anyone, and thus distinct–but in this case, she is making a distinction where in the other case she is generalizing.  That is, the baker is being asked to make a cake with a message written on it, and if the message is not an expression of the baker’s beliefs he cannot discriminate based on the message.  If a baker can say he will make a cake with the message, “Congratulations on your fiftieth wedding anniversary and enjoy your cruise” but he won’t make a cake with the message “Homosexual perverts will not possess God’s kingdom”, he is discriminating based on his own beliefs, making one message cake for one customer but not making another message cake for another customer.

Before Gorsuch explores this he notes that the commission changed its legal standards between the two kinds of cases.  In both cases, the persons most likely to purchase the type of cake in question were members of a protected class.  In the case in which the commission agreed with the bakers that the message was offensive, they said that there had to be a showing of actual animus toward the class for the charge to stand; in the case in which they disagreed with the baker’s views, they said that such animus could be presumed by the recognition of the effect on the protected class.

Justice Thomas agrees with the court in its assessment of the religious prejudice, but he asserts that the baker’s freedom of speech is also impinged in this case.  He notes that the Colorado Court of Appeals agreed that Phillips’ work was expressive, crafting individual wedding cakes for customers, meeting with the couple and working to express them in the artistic project that is their cake.  He demonstrates that a wedding cake itself is a communication that a marriage is occurring.  Ultimately, he holds that freedom of speech must allow persons to refuse to create anything that expresses endorsement of a view with which they disagree, even if it is a culturally favored view.

Justice Ginsburg disagrees.  She says that notwithstanding Phillips’ claims, most observers would not recognize a wedding cake as expressing a message, and certainly not a message from the baker.  She says that the evidence of bias is insufficient and there is no significant hostility toward religion here.  She then makes the same argument made by Kagan, that a wedding cake is a wedding cake, which as has been shown is flawed.

In conclusion, the case does rule that religious opinion, including specifically Christian opinion that homosexual marriage is immoral, is protected and should be treated with respect.  It does not rule that Christian bakers can en masse refuse to make cakes for homosexual weddings, but that if they do so any legal action taken against them must be adjudicated impartially and with respect for the religious views of the bakers.  Depending on the circumstances, the baker might still be compelled to make such a cake or punished for refusing to do so.