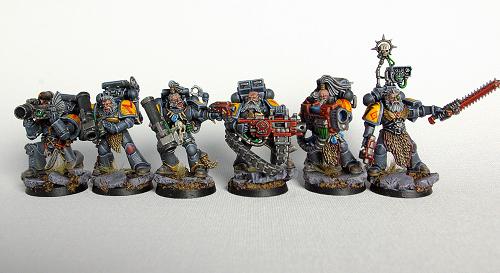 This is mark Joseph “young” blog entry #162, on the subject of Furry Thinking.

If you are in the gamer community you probably have already heard or thought most of this.  Ridiculous news travels fast.  For those who are not, well, it’s worth getting you up to speed a bit.

A British company known as Games Workshop publishes a game under the name Warhammer 40K.  The “40K” part means that it is set in a far-flung (forty millennia) future in which, perhaps somewhat ridiculously, primitives fight with mechas.  The game makes significant use of miniatures, which the company produces and sells.  These miniatures are entirely made of plastic, but some of them have designs that include the image of fur clothing or covering on people or machines.

PETA, that is, People for the Ethical Treatment of Animals, is protesting this.

I am tempted to join the chorus of those who assert that PETA has lost it–it being at least the last shreds of credibility that the organization had.  I would prefer to think that they are intelligent people who have sound reasons for their position, and so I would like to attempt at least to understand them.  I do not agree with them, because of what I think are some fundamental issues, but in order to discuss those issues I think it is important at least to attempt to grasp their view.

The stated issue is that the appearance of fur on the models, even given that it isn’t even faux fur but just molded plastic in a roughened pattern that looks like fur, sends a wrong message.  That in itself is a bit ridiculous–as one father of a gamer reported his daughter asking, how can PETA tell whether the plastic molding representation is supposed to be real fur or fake fur?  However, we should give PETA the benefit of the doubt.  They could reasonably object to the use of fake fur for much the same reason:  it is popular because it looks like real fur, and in looking like real fur suggests that killing animals for their fur is an appropriate human action.  People should not kill animals for fur today, and suggesting that it will be acceptable to do so forty thousand years in the future is just as unacceptable.

In its argument, PETA includes some detail about the inhumane ways in which animals are either trapped or hunted and killed, or raised and killed, for their furs.  Within the context it’s a bit ridiculous–for all we know, in the Warhammer world such furs might be grown in vats of cultured skin skin cells that have no innervation and no central nervous system, and thus no real pain.  Fur might grow on trees, genetically mutated or modified.  They might have devised completely painless methods of hunting, trapping, and killing fur-bearing animals.  Extending an argument based on the details of actual modern treatment of such animals to the distant future is indeed silly.  However, it is probably not the distant future with which PETA is concerned.  If they still exist in forty millennia they will undoubtedly argue whether any of those methods are truly humane; their real argument is not whether these are appropriate actions in the future, but whether they convey an appropriate message to the present.  Their position in the present is that it is fundamentally wrong to kill animals for their skins, and so the suggestion that it will be permissible in the distant future is a wrong message, because it always will be–and by implication, always has been–wrong for people to do this.

That is where PETA and I part company on this issue.

Somewhere I have seen, probably in some natural history museum, a montage of a group of primitive men dressed in furs using spears to bring down a Woolly Mammoth.  That display, to my mind, communicates something of the reality of the lives of our distant ancestors.  Yet if PETA is to be taken seriously, that display sends the same kind of wrong message as is sent by the Games Workshop miniatures:  humans have killed animals so as to clothe themselves in the furs, and are engaged in killing another animal.  It might even be argued in their favor that one of the theories for the disappearance of the Siberian Mammoth from the world is that it was hunted to extinction by primitive humans (although in fairness it has also been suggested that they died due to the decline of their habitat at the close of the last ice age).  Yet wearing furs and killing animals was how those humans survived, and thus the means by which we have come to be alive today.

I think that PETA would probably assert that the humans had no higher right to survive than the bears and wolves and deer and other creatures they killed for those furs, or the mammoths they hunted for meat and skin.  PETA has an egalitarian view of the creatures of the world, as I understand it:  all creatures are created equal, and have an equal claim to continued life.  People have no right to kill animals for their own purposes, whether for clothes or for food or for habitat.

One reason this view is held is that people believe there are only two possible views.  The perceived alternative is to believe that humans have no obligations at all to other creatures, and can use them however we want, kill them with impunity, torture them even for no better purpose than our own entertainment, eat them, and wear their bodies as clothing and jewelry or use it to adorn our dwellings.  Put in its extreme form, this position is indeed reprehensible, and I object to it as much as PETA does.  However, these are not the only two positions.

Still, that “reprehensible” position is at least defensible.  PETA can argue that the human species has no better right to survive than any other creatures, but it is equally true under that argument that our right to survive is not any less.  Other creatures do not, by this fundamentally naturalistic argument, owe us their lives, but neither do we owe them theirs.  If our survival is enhanced at their expense, it cannot be asserted that we have less right to survive than they.  In the abstract the claim that we do not have a higher right sounds good, but if the issue were to be whether you or I would survive, it is very likely that you would choose you, and if it went to court after the fact and it was reasonably clearly apparent that it was “you or me”, the courts would undoubtedly exonerate you for choosing your own survival over mine.  The simplest form of that is the self-defense defense, but it’s not the only situation in which this is a factor.  Our ancestors killed animals and ate them and wore their furs because in a very real sense it was “them or us”, either we kill these animals and protect ourselves in their skins or we die of exposure.  Certainly I think that killing for furs that are not needed for our survival but merely decorative is selfish, but under a naturalistic viewpoint I can find no basis for saying that it is wrong to put the needs and preferences of other creatures above our own.  Further, I would not condemn an Inuit for his sealskin boots–it is part of his survival, and it is not clear that modern boots are either as easily available to him or as effective for the purpose.

Yet I do not intend to defend that position.  I think there is a third position that covers the concerns of both PETA and the Inuit.  Man is neither the equal of the other creatures in this world nor the owner of them.  We are their caretakers; they are our charges.

That means that sometimes we have to kill them, responsibly.  The best example is the deer of North America.  In most of the continent, and particularly most of the United States, deer thrive but the predators that kept their numbers in check have been decimated.  Without wolves and mountain lions in significant numbers to kill and eat the deer, their natural reproductive rate (geared to replace those lost to predation) quickly overpopulates the environment.  Certainly we have the selfish concern that they will eat our gardens, but even without that part of the problem they will starve in droves, because there is not enough food to feed them all.  The lack of predators is our fault, but only partly intentional.  Certainly we took steps to protect our children from creatures that would recognize them as a potential meal, but it is also the case that we frighten them, and so as we expand they retreat.  That means that deer will die, and their bodies litter the wilderness–and the alternative is for us to maintain managed killing of the overpopulation.  Licensed hunting is an effective and economical approach.  There might be other ways–such as rounding up herds into slaughterhouses and selling the meat on the market–but PETA would find these at least as objectionable.

It also means that we have the right to kill them when in our view it meets our needs–such as taking cattle and pigs and fowl to slaughterhouses to put meat on our tables.

The issue of whether we should refrain from killing animals for clothing is a more complicated one.  After all, in Genesis 3:21 we are told that God made garments of skin for Adam and Eve when they were inadequately clothed in leaves, and we take that to mean that it was the skins of animals, and that thereafter we dressed ourselves in animal skins following the example God gave us.  On the other hand, we have other materials now which are at least as good, and we have a shortage of animals, at least measured against the number of people we have to clothe.  We can provide for our needs without killing a lot of animals, and so we should prioritize our responsibility to care for those we still have.  That does not mean we cannot use fur or leather as part of our clothing; it means that such use should be limited to situations in which it is the best choice for the purpose.

It also means that in a distant future in which animals, including predatory animals, are plentiful and humans are struggling to survive, our present standards about killing creatures for fur or wearing the skins of animals who died or were killed for other reasons simply do not apply.  Most of those who are intelligent enough to be able to play complicated miniatures wargames are also intelligent enough to understand this, even if PETA is not.