This is mark Joseph “young” blog entry #153, on the subject of What Are Ghosts?

Thus spoke the Cowardly Lion (in The Wizard of Oz, of course)–but that which caused him to believe in ghosts was not a ghost, but a meddling witch.  This came back to me as I listened to a syndicated radio host (The Wally Show) saying that he did not believe in ghosts, but if he was in the real estate market and someone told him that a particular house was haunted, he would not buy it.  We will get back to that.  He also admitted that as Christians we believe in some kind of spirit realm–but that the idea of ghosts was still not something he could accept.

I’m going to say that I believe in ghosts in the sense that I believe there are real phenomena which have not been materialistically explained which at least appear to be manifestations of spirits. 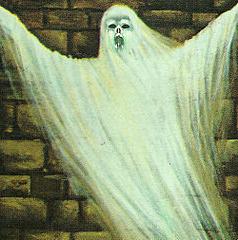 That said, though, just because I believe in “ghosts” does not mean I have any clue as to exactly what they are.  That might be overstating it–I have many clues, but nothing sufficient to achieve certainty.  Thus in the interest of making it clear just how unclear the matter actually is, here are a few of the possibilities, as I understand them.

From this it is evident that assuming the phenomena to be real there are still a great many plausible explanations for it.  None of these explanations covers every detail of every supposed encounter, but then, none of them is the only possible explanation for any reported encounter.  There might be ghosts; there might be something that tricks us, intentionally or accidentally, into believing that we have seen ghosts.  As with Unidentified Flying Objects, it might be that different explanations apply in different cases, and some of them are real departed spirits, but others are not.

I am not afraid of ghosts, but I have never had an encounter.  I don’t know that I would be uncomfortable living in a supposedly haunted house.  However, there is good reason to be reluctant to buy a house that is said to be haunted:  such rumors will impact its market value.  There are always stories attached to houses, but when the stories have a negative emotional impact–previous home of serial killer, house in which entire family died mysteriously–it makes the property less desirable.  “Haunted” is exactly such a story.  If a house is thought to be haunted, you can probably buy it for very little money, and sell it for less.  It becomes a bad financial decision.  So of course I would be hesitant to buy a house I had been told was haunted, not because I necessarily believe that, but because when the time comes to sell my potential buyers are likely to believe it.

So I do believe that there might be something like ghosts out there, but I don’t believe we either do or can know exactly what they are.  We are not equipped to deal with objects in the spirit realm, or indeed even to know with certainty whether that is what we are encountering.