This is mark Joseph “young” blog entry #151, on the subject of A Musician’s Resume.

I am a musician–always have been, a music major in high school, my kindergarten teacher dubbed me her “little songbird”, and I tell people that English is my second language.  I am good at it (I do not believe God intends for us to denigrate our abilities by lying)–but I don’t get as many opportunities to do something with it as I would like. 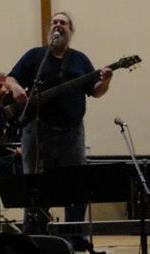 I belong to several online Christian musician groups, and periodically I see notices seeking someone for a band.  I am always a bit hesitant as to how to respond to these.  For one thing, I am particularly bad at self-promotion and do not like to do it; for another, I have sometimes been rejected without explanation or, worse, completely ignored, and that hurts.  (Rejected with an explanation is always better, even if the explanation is offensive.)  Beyond that, well, when you have as much experience in the Christian music field as I have, you also have a lot of questions going into just about any opportunity.  Sometimes I think that the people trying to form bands haven’t really thought through any of it, and the questions confuse them.  So to resolve all of these matters, I decided I would put details about my experience, abilities, and hopes here, and in future refer people here who want to know more about me.

This is something of a confusing and oversized page, because it really is attempting to accomplish three different goals:

While those goals are not completely compatible, they overlap sufficiently that three separate pages would be highly redundant.  Thus there is much here that is of no interest to persons in connection with any one of those, but hopefully everything that any of them would want to know is here.

It seemed best to begin with a list of bands in which I have been a member, and what my part in it was.  I am undoubtedly omitting a number of them, but the list is extensive even so.  I fronted[1] for all of these, but always shared the position with other members of the band.

I have also done a substantial amount of solo work[2], and filled in as requested in other bands, most recently on lead/rhythm guitar or bass guitar for several of the monthly Relentless worship services at the Bridgeton Assembly of God church.

If you hand me an instrument I’ve never seen before, within an hour I will play you a song I wrote for it.  I’ve done it with the fife, tin whistle, recorder, dulcimer, and several other instruments.  I am no longer very good at tuba and don’t have one, and my trumpet playing has never been good and the trumpet needs repair, but if you’re looking for someone who can fill in with odd instruments, I probably fit the bill.

As mentioned, I have or have access to a six-string bass, a couple of six-string guitars, a flute, and several other miscellaneous instruments; I also have access to a midi keyboard (seventy-six keys).  I have several amplifiers and quite a few speakers, a few low-end microphones, a sixteen channel mixing board, and miscellaneous equipment such as cables and mic stands.

I also have a sound guy who will probably come with me (Hi, Mike) who has a fair amount of equipment as well, and knows people from whom he can borrow more.

I have written extensively about the relationship between music and ministry in previous entries on this web log; I have included a list of relevant articles at the end.  My own ministry is specifically that of teacher.  Although I would hope that would be integrated into whatever is ahead, I have long considered evangelistic bands very important and have worked with many, and I have also worked with pastoral/worship ministry bands.  If I’m joining your band, I’m supporting your ministry.

All of the previously mentioned bands were ministry bands.  I have undergraduate degrees in Biblical Studies from Luther College of the Bible and Liberal Arts (formerly) in Teaneck, NJ, and Gordon College in Wenham, MA (plus a Juris Doctore from Widener University School of Law, and a lapsed membership in Mensa).  For about the past two decades I have been the Chaplain of the Christian Gamers Guild, an international interdenominational Christian organization; I have published several books on Christian life, most famously Faith and Gaming about integrating our leisure activities with our Christianity.  I taught Biblical Studies at a fledgeling Bible College in Pitman[3], and continue to do so online through the auspices of the Christian Gamers Guild.

I was an on-air personality on one of the nation’s leading Contemporary Christian Radio stations[4] for half a decade, where I interviewed many artists and others in the Christian music industry, taught Bible online, and otherwise ministered to the listeners.

My Hopes and Expectations

I have done a lot of solo work, and am certainly willing to sing and play solo anywhere that wants me.  It is not what I prefer for two primary reasons.  The more important is that it is so limiting, because there is only so much one person who is not able to use computer-generated musical accompaniment can do alone on stage.  The lesser is that I don’t like to feel like I’m putting myself forward, so I insist on sharing the stage and the spotlight with others.  I have long told my band members that everyone in the band is there to make everyone else in the band look good, not to worry about how they themselves look because that’s the responsibility of everyone else in the band.  It’s easier to do that if there’s actually a band, and I’m not alone in the spotlight.  When I do solo appearances, I try to include some time teaching, because that is ultimately my ministry.[5]

If I “had my druthers, I’druther” reform Collision.  For one thing, the band has a name and a following including an extant album.  For another, I like the concept, the minstry purposes, the goals.  But I’m not wedded to this, and if someone is interested in including me in whatever ministry they are doing, that’s something I will seriously consider.

The vision for Collision is to be the band people tell other people they need to hear, to do music that is on the rock side of contemporary, and to use it to proclaim the gospel as an evangelistic outreach.  My expectations are that everyone plays an instrument; I’d like several vocalists, but understand that not everyone can sing.  The ideal instrumentation was conceived as lead guitar, rhythm guitar, bass guitar, drums, and a “fifth instrument” that floats between keyboards and other instruments as needed; at our height we replaced the rhythm guitar with keyboards quite well, and lost the fifth instrument, but ran two voices (we were adding a rhythm guitar/vocalist just before we started losing people).  Again, though, it’s flexible:  if the Lord provides a different collection of musicians, that’s what we will use.

I have worked with seasoned professionals, and have trained rank amateurs, and am open to discussing options with anyone who thinks I might be good for whatever they are doing, or that they might like to work with me.

So if you think I’m your guy, be ready to answer those questions and get in touch with me.

Here are those hopefully helpful articles about Christian music and ministry:

1  I use the word “fronted” to mean that I would speak to the audience, such as introducing songs and band members; it also usually included sharing some teaching or testimony.
2  When I perform solo I usually play an acoustic guitar and/or an acoustic piano if one is available on site; I sometimes play an electric guitar and/or electric piano.
3  The school was named The Institute of the Great Commission, and was started by a local church named The Rock; I taught one term, but then a church split undercut the funding and the school laid off half of the four-member faculty.
4  WNNN-FM, licensed to Canton, NJ, with studios in Salem.  Sometime in the late 1970s it was reportedly number twelve on a list of such stations, and when I was program director I was informed by one of the major label radio relations people that we were one of the fifty stations she contacted every week.  It was sold and pirated for parts a few years after my departure.
5  My teaching is readily available on many posts on this web log, but #121:  The Christian and the Law is particularly significant as an example of a teaching from a concert, and #88:  Sheep and Goats as something I taught at a service which was not a concert.