This is mark Joseph “young” blog entry #98, on the subject of What Is a Minister?

We have been talking about being “called” to “music ministry”.  Our first installment, #95:  Music Ministry Disconnect, made the point that although all Christians are called to minister and do all things to the glory of God, and all Christian musicians are to use their gifts for God’s glory, most Christians are not what we call “ministers” and most musicians are “entertainers”.  In #97:  Ministry Calling we examined how to know whether you are “called” to be a “minister”.  A large part of that proved to be that you simply and quite unintentionally acted like a particular kind of minister, and thus to know whether you are a “minister” you need to know something about what motivates those who are, and what they do quite naturally.

Immediately we hit a problem:  It does not appear that the New Testament uses the words “minister” or “ministry” in quite the, shall we say, technical way we do.  Everyone in the church has a “ministry”.  It is perfectly proper to speak of as ministers those whose ministry involves making the coffee for the break, or driving the shut-ins to services.  Where the words are used, they mean “servants” or “servers” or “services” or “serving”, what it is that we do to help others.  In that sense everyone is a minister, and everyone has some kind of calling.  Indeed, our musical “entertainers” can reasonably be said to have “ministries” of entertaining and encouraging and enlightening us with their music.  Yet there are some who are distinguished in what we might think leadership positions, people we call “ministers” because they in some sense stand apart from those we sometimes call “laymen”.  Sometimes we distinguish it by what we call “ordination” or “being ordained”, but we also give “licenses” to preach and other forms of recognition to various ministries, and in some churches and denominations it is much less formal but still structured, that some people are seen to be the pastors or leaders of the church who do the ministering and others the congregants who benefit from it.  The New Testament does not give us a word for this beyond saying that these people are “gifts given to men”.

This is not entirely foreign to the New Testament, though.  We previously noted that in Ephesians 4:11 Paul identifies five types of people who are given as gifts to the church, by the designations apostle, prophet, evangelist, pastor, and teacher.  These are apparently distinct, serving specific but related functions and purposes within the body of Christ.  No one is called to be “a minister”; rather, an individual is called to be one of these–an apostle, prophet, evangelist, pastor, or teacher.  There is precedent in the New Testament to support the notion that an individual can be more than one of these, but these are the five categories we mean when we speak of “ministers” being “called”. 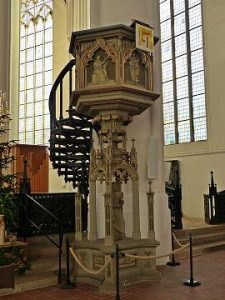 Again to be clear, these are not the only people who have what we might call “positions” of “service” or “responsibility” within the church.  The New Testament also mentions “episkopos” which we usually render “overseers” or sometimes “bishops” (which is from the Latin for overseers); “presbuteros” which means “elders” but is sometimes transliterated to “presbyters”; “diakonos” which technically means “waiters” as in the people who serve food at meals but is often generalized to “servants” or transliterated to “deacons”.  However, we are told that it is good to aspire to these offices and given requirements for them, which makes no sense if we’re talking about who you were born to be.  There are people with gifts of healings, gifts of administration, and many other kinds of gifts, but there is at least the suggestion that you can pray for gifts you believe would be useful (specifically interpretation if you speak in tongues), and that gifts come at some point during your life, so again this is not who you were born to be.  These five, though, are identified here not as jobs people assume or gifts they have received, but as five kinds of people who have been given, and with the purpose stated as (quoting from the Webster Bible) “For the perfecting of the saints, for the work of the ministry, for the edifying of the body of Christ.”  These seem to be the people who do what we might call the “spiritual” work, whose job it is to build the church into what we, individually and collectively, are intended to be.

Interestingly, the list appears to be built as a stack of contrasts.  It uses a Greek grammatical form known as a “men…de” construction, typically read “on the one hand…on the other hand”, although in this case there are several hands, on the one hand the apostles, on the other hand the prophets, on the other hand the evangelists, on the other hand the pastors and teachers, and so the list seems to be in some kind of order.  Because of our reverence for apostles and prophets, we often make it a hierarchical order of authority:  the infallible apostles are in charge, followed by the divinely-inspired prophets, and then the others–but we don’t really like putting evangelists above pastors, and many of us assert that there are no longer any apostles or prophets in the church today.  Those conclusions are probably all mistaken.  I believe that when we understand what these ministries are we will also understand that they are listed in the sequential order in which they are needed in a local church.

Some argue that there are not five items on this list but only four, the fourth being properly understood something like “pastor-teachers”.  My own experience and observation suggests that there are some excellent pastors who are not very good teachers, and some good teachers (among whom I might number myself) who are not pastors.  That, though, is too empirical for the basis of an exegetical conclusion.  Rather, I observe that although there are several persons in the New Testament who are specifically identified (by name) as teachers–most prominent among them Paul–only one is specifically identified as a pastor, Peter, who is never identified as a teacher, and obviously none of the teachers are identified as pastors.  That is either a remarkable coincidence or an indication that the two words identify distinct ministries within the church, and the latter explanation fits the empirical observation.  Thus it would seem that if you are called to ministry in that sense, you are probably called to one of these five ministries, and it is important to understand which one you are.

Again, this applies even if you are called to music ministry.  An evangelistic music ministry is going to look very different from a pastoral one, because in the one case the music is being integrated into a primarily evangelistic outreach ministry while in the other it is connected to pastoral care and shepherding.

It would be overmuch for this one post to tackle all five of the named ministries, so we will stop here and begin at the top of the list next time.