This is mark Joseph “young” blog entry #121, on the subject of The Christian and the Law.

This is a rough presentation of the teaching I delivered at Living Water Connections Dinner Theater on October 21st, 2016.  It was drafted prior to that appearance and polished afterwards, but is not intended to be a transcription. 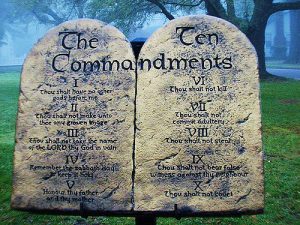 I apologize for that; it’s not my fault.

I have been asked to share briefly tonight, and since I am a composer and musical performer I will be doing several songs–but I am also a teacher, and it would be negligent of me not to share something valuable you can recall later.  And it happens that that first song [The Secret] gives me a wonderful opening, because it touches on an issue that is a huge problem for many Christians.  It was a problem for me for a long time, even after I had earned two degrees in Biblical studies: what is the Christian’s relationship to the Law?

We hear a lot of answers to this.  There are some who will tell you that the Christian is responsible to keep the entire Law, and that Jesus helps us do that and forgives us when we fail.  However, I don’t see a tabernacle or sacrifices, and I do see Paul making sacrifices in Acts, so I think maybe these people aren’t trying very hard.

A much more interesting solution suggests that the Law is actually several kinds of law, a ritual law, a dietary law, a civil law, but that the only part we are obliged to keep is the moral law.  Thus on this theory when I see a commandment like “Do not kill” I know that this is a moral law and everyone is obligated to obey it, but when I read “Do not boil a lamb in its mother’s milk” I conclude that this is dietary and doesn’t apply to me.  However, I notice that my Bible does not label individual commandments, this is ceremonial, this is moral, this is civil.  What about the directive that we not eat sharks?  Is this just a dietary rule, or is there some moral basis for the idea that sharks are a higher life form–not as high as man, but above ordinary animals and deserving some kind of special respect?  And what of that command about keeping the Sabbath?  That’s one of the top ten, but sounds more like ceremonial law than moral law.

What we find with this solution is that there really is no objective law but the one we decide–we make ourselves the lawgivers, and decree that God said these things and intended for them to apply to everyone, but these other things don’t apply anymore.  That’s not really a law; that’s us using scripture to support our own opinions.

It is obviously a vexing question, and you’d think that for something as important as this the Bible would have given us an answer–but it did give us an answer, it’s just that the answer is so radical that we don’t like it, so we ignore it and try to find a different answer.

You’ll find the answer–well, all over, really, but particularly clearly in the fifteenth chapter of Acts, what we call the Jerusalem Council.  The heart of the church was in Jerusalem, and several of the original apostles were there.  Jerusalem, being in the center of Judea, was populated almost entirely by Jews, and so the church there was comprised of Jewish believers who all kept the law, made sacrifices, ate kosher food, and circumcised their children.  However, up the road in Syrian Antioch Paul and Barnabas were part of a different kind of church.  Syria had some Jewish residents, but the majority were not Jews, were what we call gentiles.  Many of them had come to have faith in Jesus.  It was a mixed church.  And it was from that church that missionaries had been sent to carry the gospel to people elsewhere, so they were carrying the gospel as it was understood in Syrian Antioch, and it reached many more gentiles.

Some of the Jews in Jerusalem thought that these gentile Christians needed to keep the whole law as they did, to be circumcised and make sacrifices and stick to a kosher diet.  After all, the church’s own understanding of itself was that it was the correct denomination of Judaism–kind of like the disagreement between the Lutherans and the Catholics at the time of the Reformation, the former believing that the latter no longer represented the true faith and that they did.  If you were not Jewish but became Christian, that made you a child of Abraham and a true Jew, and that meant you should keep the Law as completely as every other Jew.  Paul and Barnabas disagreed, so they came with a delegation to Jerusalem to discuss it, and the church came to a conclusion and wrote a letter to the gentile Christans living in places like Galatia, part of modern Turkey, to tell them.  The answer was this:  you gentiles who have come to faith, you who were never Jewish, do not have to keep the Law at all.  It does not apply to you.  Oh, they suggested a couple things that should be done to prevent creating tension with the Jewish believers who were also part of the church, but these weren’t the Ten Commandments–one of them was don’t drink blood.

So does this mean that we can completely ignore the Law and do whatever we want?  Well, yes and no.  Paul explained it well when he wrote to the Galatians, probably just before this meeting, but he uses a word for which we don’t have an English equivalent because it identifies a specific household servant in households in the Roman Empire for whom we do not have a corresponding job in the modern world.  This person was almost always a slave, but he was given the task of raising the children and so was given complete authority over them.  He told them when to get up, what to do, when to go to bed; he could punish them, even beat them if necessary.  He was to see to it that they learned their academic subjects, did their homework, got their exercise and physical trainng, learned how to act in polite society, and altogether grew up to be responsible adult members of the household.  Then once he had accomplished that, he lost all authority over them.  His job was finished.

I have a wonderful example of this; I love this example.  How many of you remember Mommy saying, “Don’t touch the stove?”  Many of you have probably said it to your own children, because stoves are dangerous.  But gradually the rule changes, becoming “Don’t touch the stove without Mommy to help you,” then “Be careful when you use the stove,” then “I don’t have to tell you to be careful when you use the stove,” and ultimately the rule disappears–not because stoves have become safe, but because we have learned to use this dangerous tool safely.  Many of our childhood rules are like that, morphing into something else as we grow.  I still don’t fight with my brother over toys because I have learned that this is not a good way to resolve our differences.  I no longer hold my mother’s hand when I cross the street because hopefully I have learned to use the same care that she used when I was young.

This is not something I made up; the church has always known this.  It is exactly as Augustine said it was:  “The law for the Christian is love God and do as you please.”  He knew that was right because he understood that if you love someone, you try to be someone they approve, to be like them.  You don’t have any rules you have to follow; just be like God, showing love to everyone.

Which is a good segue into this next song [Free].

Video of the beginning of my portion of the evening is available on Facebook.