I last wrote suggesting that it was in everyone’s best interest in terms of future national elections to vote in present local elections, and said that I would try to produce something helpful in that regard.  This is that.

I suppose the place to start is to suggest that most of my readers need to look elsewhere for help.  I cannot adequately cover even New Jersey, given all its municipalities.  I can point you to Ballotpedia as perhaps the most unbiased source of information on most of these issues; you can also get some information from U. S. Politics My Time to Vote (links to individual states are at the bottom of the main page) and Rock the Vote, although this site is more geared toward getting younger voters active in the process and its election information is mostly given as links to official web sites.  Ultimately those official web sites are the place to get the most accurate, if not the most easily accessed, information, and most states have online copies of sample ballots available so you can see the choices before you reach the booth.

The big elections this year are state legislatures.  Louisiana and Mississippi both have all seats in both houses up for re-election, but Republican control is not thought to be challenged.  Virginia is different.  Although both houses are controlled by Republicans and all seats are up for re-election, the governorship recently shifted to Democratic control, and the Senate is closely balanced twenty-one-to-nineteen.  If the Democrats can unseat one Republican they will create a twenty-to-twenty balance and the Democratic Lieutenant Governor, serving as Senate President (much as the Vice President of the United States does in the United States Senate), would cast the tiebreaking vote giving Democrats a slim majority.  Complicating it further, though, there is an independent running against one of the incumbent Democrats with a strong chance of unseating her, which could prevent the Democrats from having a controlling majority.

Which brings us to New Jersey.  Our State Senators serve four year terms, and this is not the election year for them; however, all of our eighty State Assembly seats are up for re-election every odd-numbered year.  We have forty legislative districts, each of which elects two Assemblymen.  Presently forty-seven of those seats are held by Democrats, thirty-one by Republicans, and two are vacant. 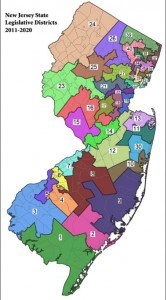 I am going to attempt to identify all forty districts, the incumbents, and the challengers in each.  I will also link to the best information I could find on each of the candidates.  Preference is given to a web site operated by the candidate, or a candidate Facebook page, with the last choice being the Ballotpedia reference page for the candidate.

Local election information is much more difficult to obtain over the Internet, but for sample ballot information you should contact your county clerk or other election officials; they are conveniently all listed on the New Jersey Department of State Division of Elections web site.

I know that’s not a lot of help, but it’s the best I can offer to such a large task.  Become informed, and then vote.